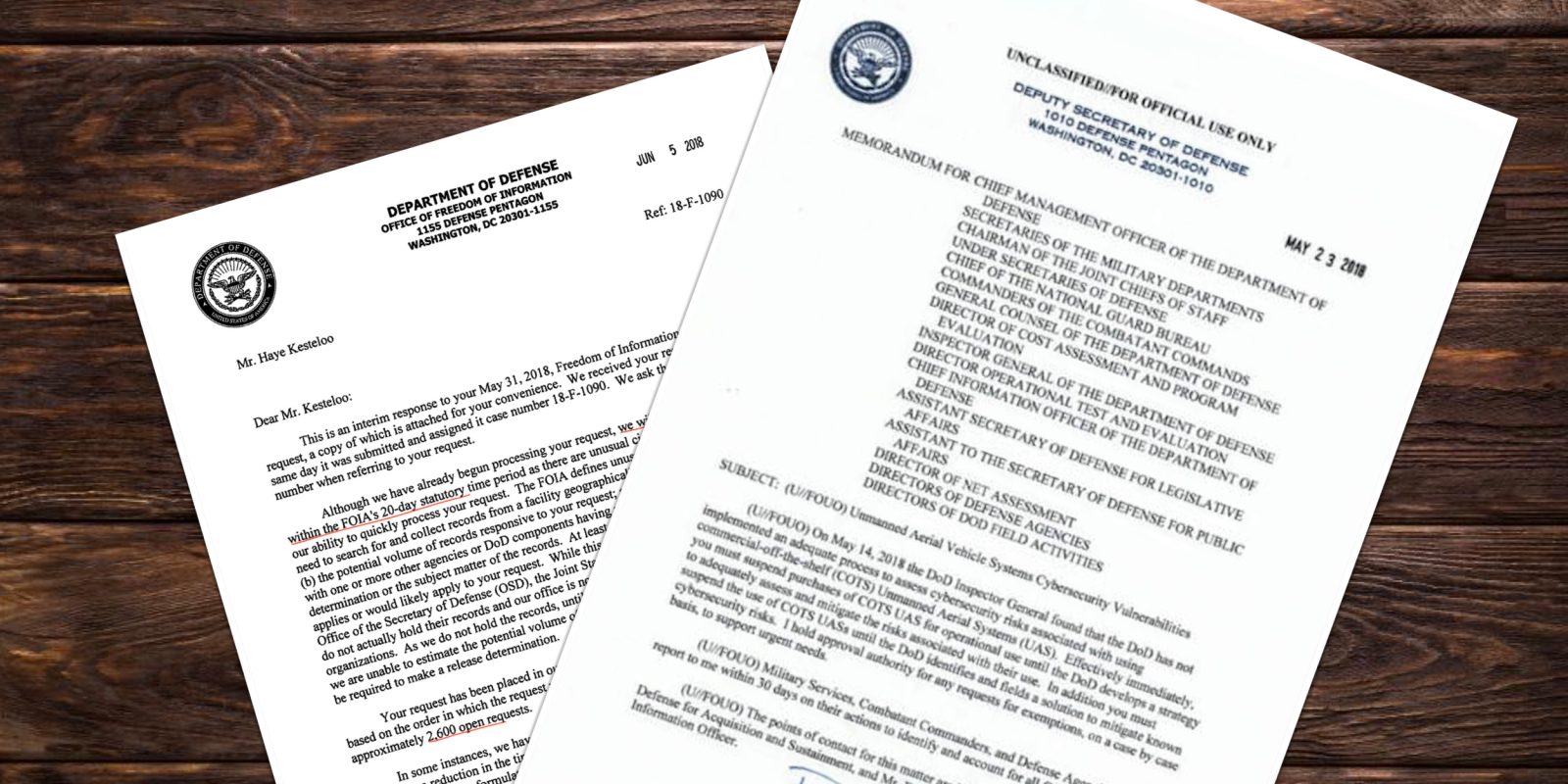 As we reported earlier, on May 7th, Chris Murphy, the Junior Senator from Connecticut had sent a letter to the U.S. Secretary of Defense, James Mattis, expressing his concerns over an additional purchase of 16 DJI drones in addition to the hundreds of DJI’s drones already purchased by U.S. government agencies and the Department of Defense. Citing security risks, the Senator urges the DoD to ban foreign-made drones. He wrote:

“I encourage you to, at a minimum, consider a DoD-wide directive banning the use of UAS owned by or manufactured in a foreign nation until further threat-assessments can be completed.”

Through one of our sources, we learned that the DoD did indeed issue a ban on the purchase of COTS UAS, including DJI. We filed an FOIA request to obtain the original document but received an interim response, informing us that:

“We (DoD) will not be able to respond within the FOIA’s 20-day statutory time period as they are unusual circumstances which impact our ability to quickly process your request.”

That was a bit of a disappointment, but it seems that the document we were after, has made its way to the media anyway, as we found today that sUAS News was able to get their hands on a copy. Well done!

Memorandum from the Dept. of Defense

Here is the official text from the unclassified/for official use only memo:

(U/FOUO) On May 14, 2018 the DoD Inspector General found that DoD has not implemented an adequate process to access cybersecurity risks associated with using commercial-off-the-shelf (COTS) Unmanned Aerial Systems (UAS).

(U/FOUO) Effectively immediately, you must suspend purchases of COTS UAS for operational use until the DoD develops a strategy to adequately assess and mitigate the risks associated with their use.

(U/FOUO) In addition you must suspend the use of COTS UASs until the DoD identifies and fields a solution to mitigate known cybersecurity risks.

(U/FOUO) I hold approval authority for any requests for exemptions, on a case by case basis, to support urgent needs.

(U/FOUO) The points of contact for this matter are Ms Ellen M, Lord, Under Secretary of Defense for Acquisition and Sustainment, and Mr, Dana Deasy, Department of Defense Chiefs Information Officer.”

The memo was sent to: 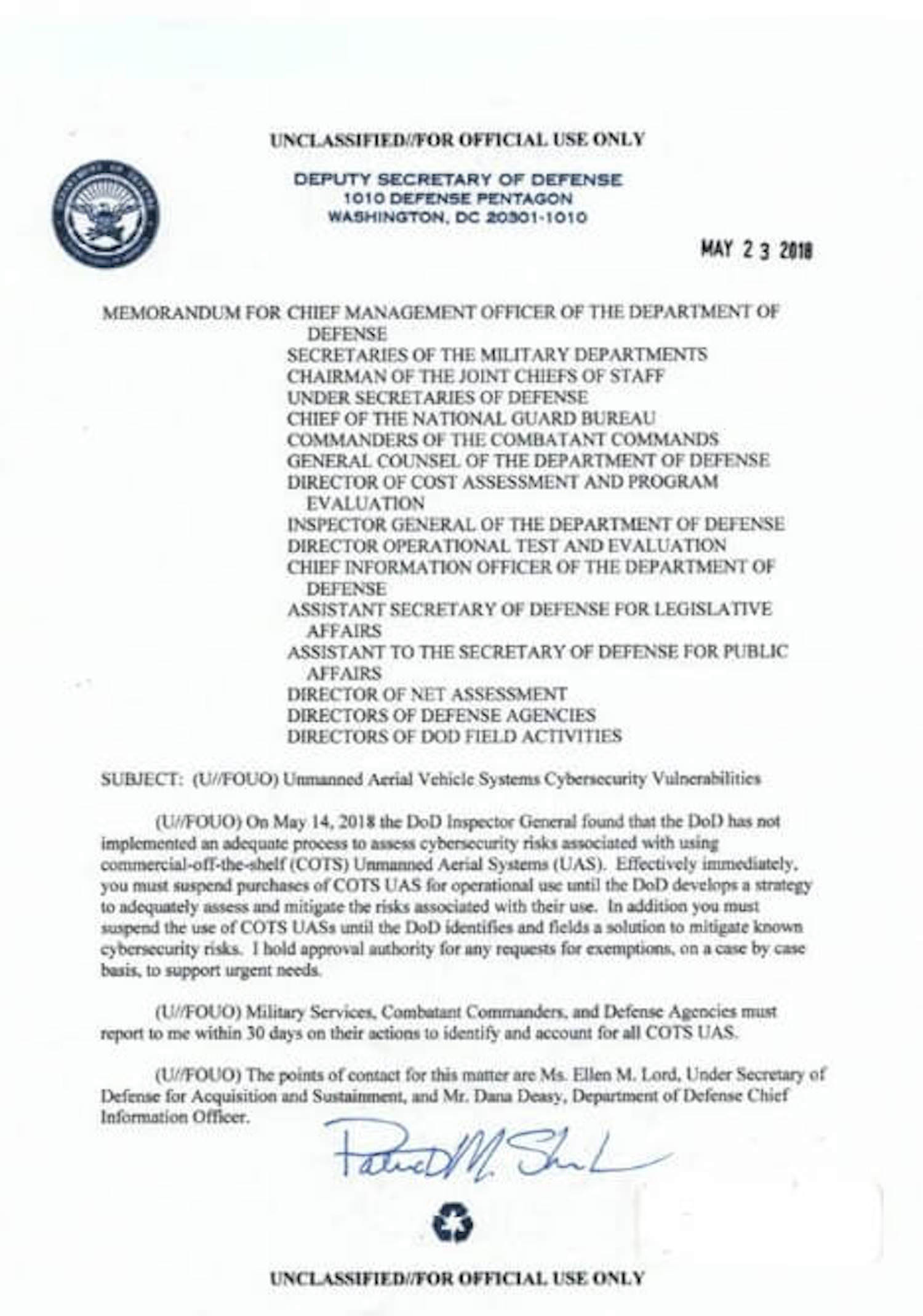 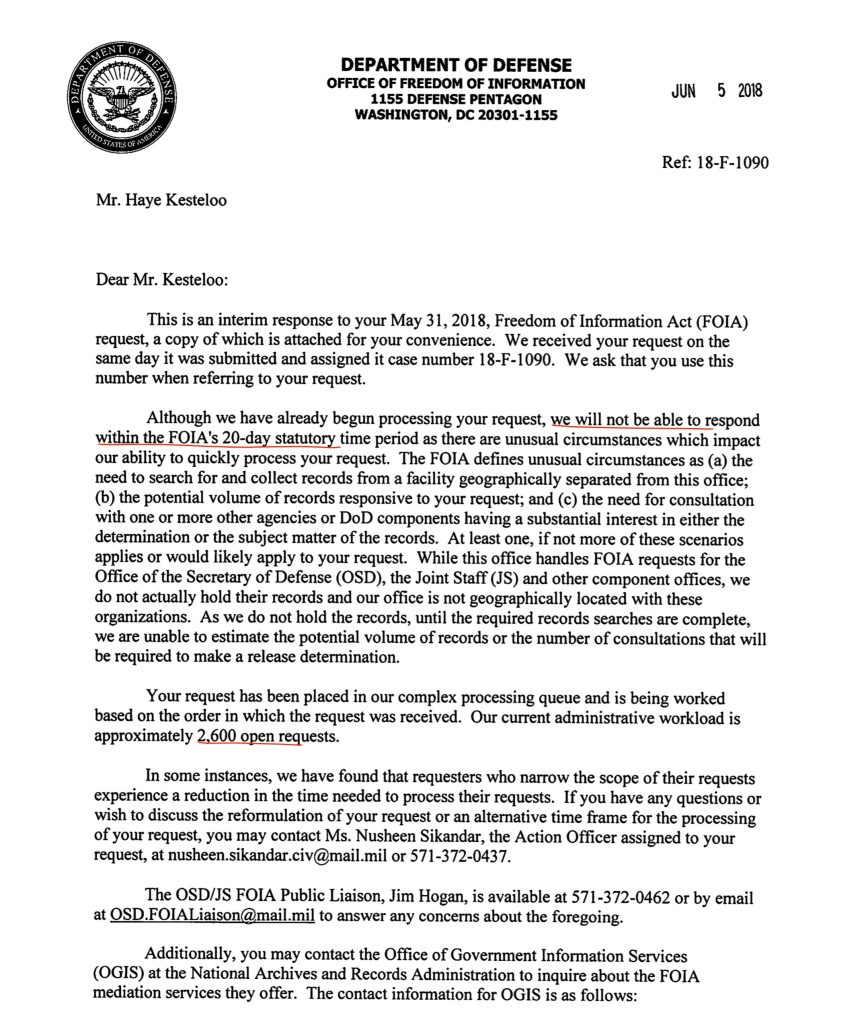