100% drought in Australia made visible through drone photos 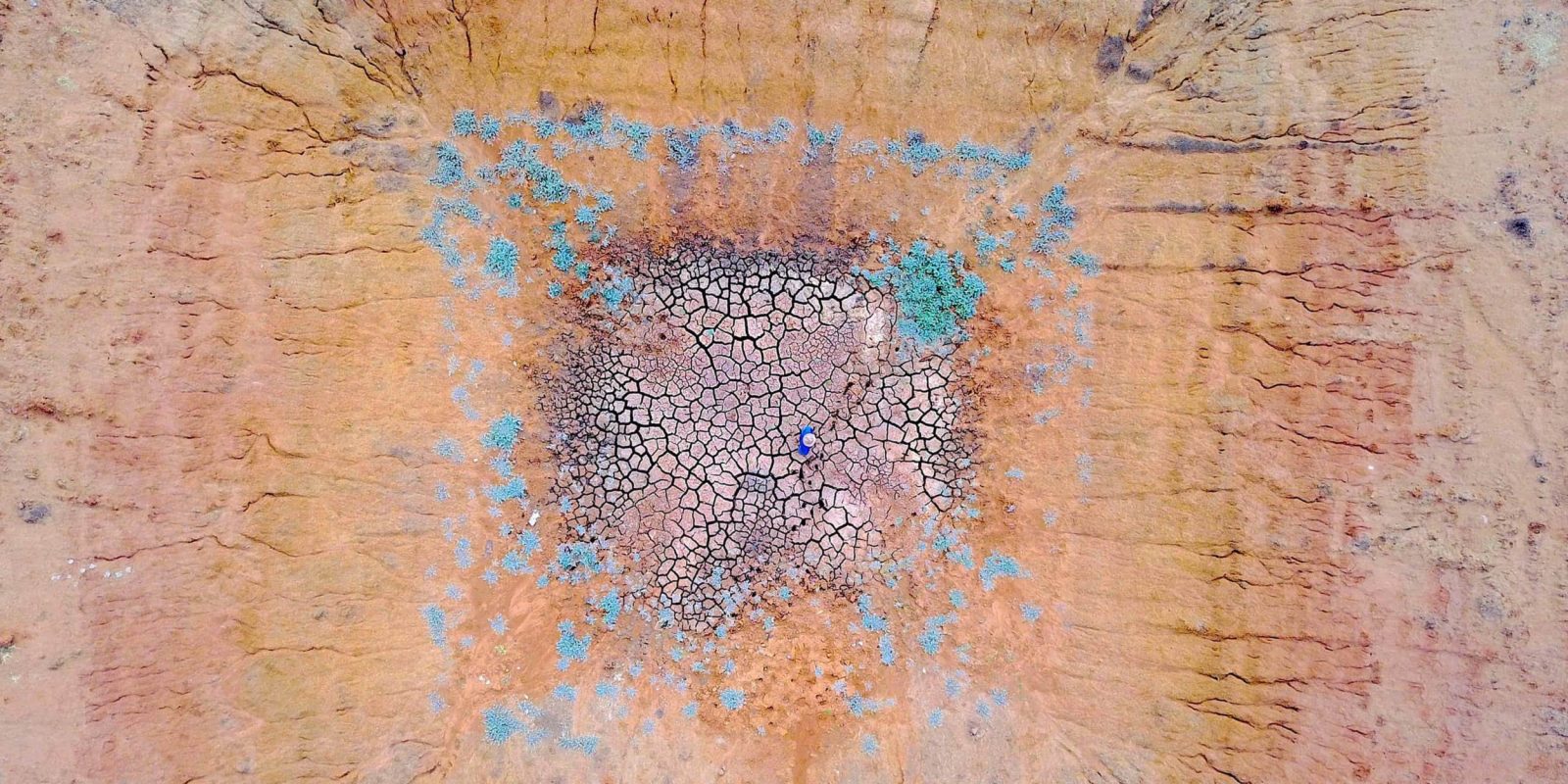 The summer of 2018 will be remembered as a very hot and dry one. Many parts of the world experienced very high temperatures and extreme drought that led to wildfires, water shortages and all kinds of other problems. The state of New South Wales in Australia wasn’t spared either as they were hit with a 100% drought, causing farmers to struggle with failing crops, reduced livestock feed, and limited water supplies. In an article from The Guardian, photographer David Gray shows us that the drought, when seen from the air, can provide some really artful scenes. David captured them with his drone for all of us to see. Check them out below.

Drone photos show the beauty of the dry conditions

Even though, the drone photos are really beautiful, for the farmers the drought is a real disaster. Farmer Ash Whitney sees no beauty at all and fears that this drought “will be around a while.” Margo, the wife of farmer Tom Wollaston, says that the droughts are not only negatively impacting her family but the farmer’s community as a whole around the nearby town of Tamworth in northwest New South Wales (NSW) state. She says that:

“I find droughts a little bit like cancer – it sort of eats away at you, and it just gets drier and drier and more severe and more severe, and impacting on your life a lot worse. I do try really hard to keep the house and the garden clean and green because that keeps your head in the right space at night time”. 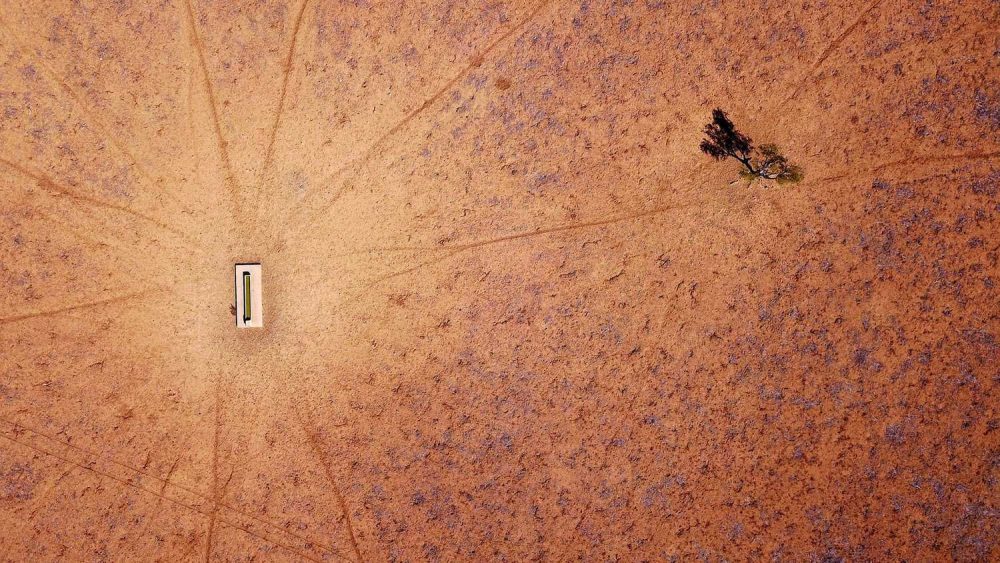 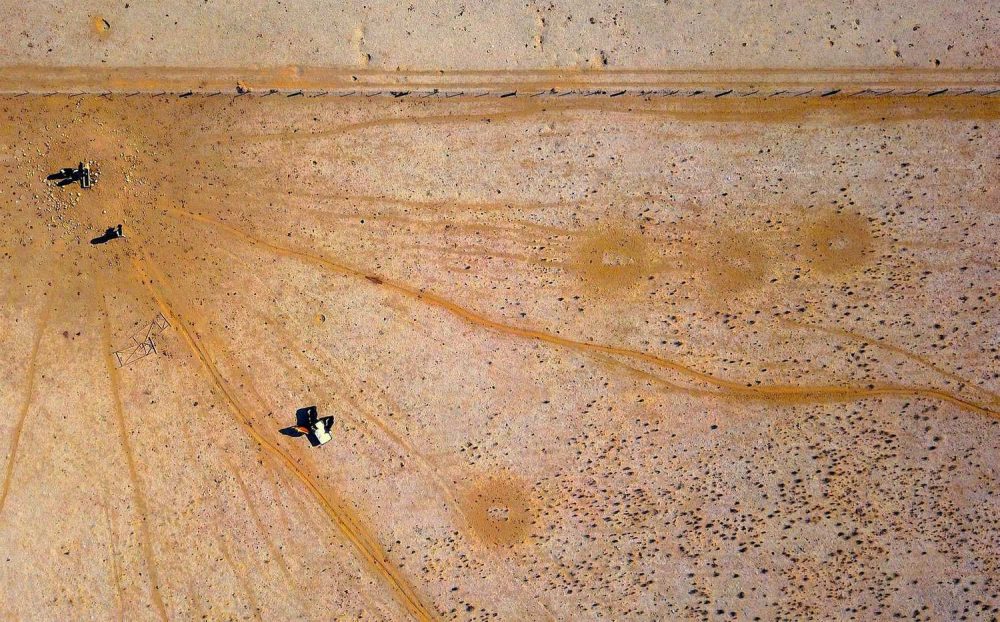 Cattle tracks seen around a water tank and feed lot. The worst drought in living memory is sweeping parts of eastern Australia. 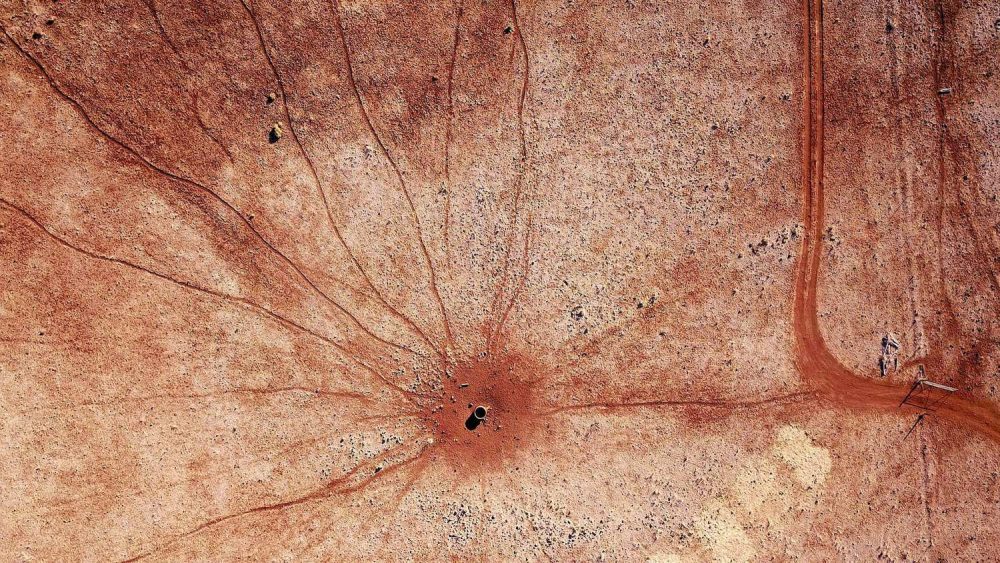 A road and tracks leading to a water tank on Whitney’s property. A quarter of Australia’s agricultural production by value is grown in NSW and the state government has offered more than A$1bn (£570m) in emergency funding to farmers. 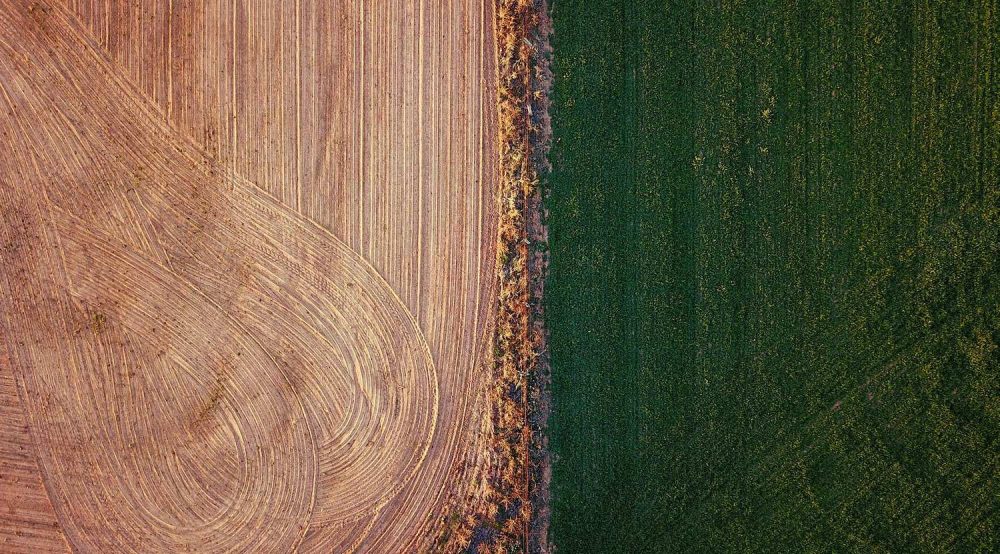 An irrigated paddock seen next to a ploughed paddock at a farm on the outskirts of the town of Mudgee. The state government has announced an extra A$500m in emergency drought relief. 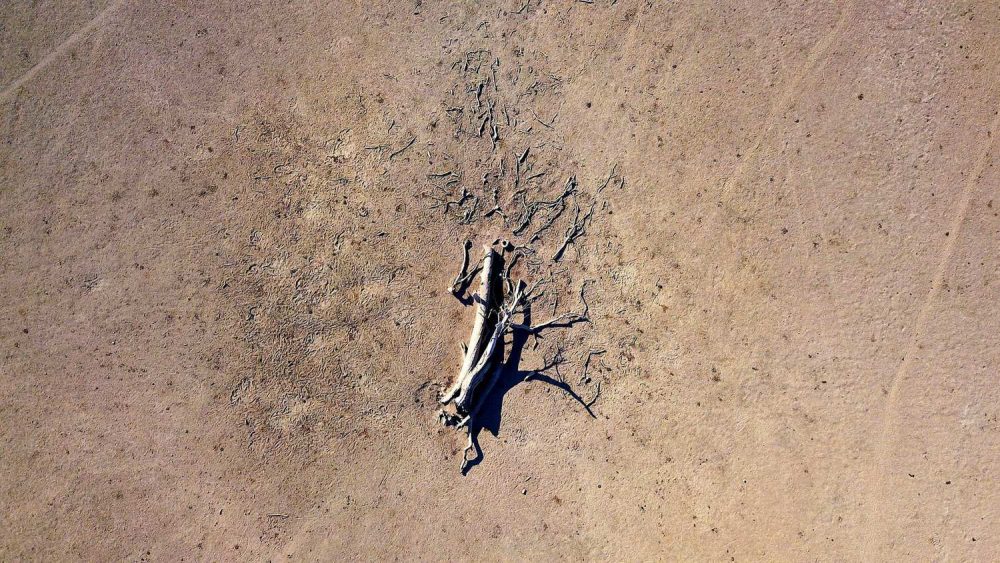 A dead tree in a drought-affected paddock on farmer Tom Wollaston’s property, west of the town of Tamworth. ‘I can’t seem to be able to do anything else apart from just feed, and keep things going, and it [the drought] seems to be one step ahead of me all the time. We’ll battle it out, but it puts a strain on everyone,’ he said. 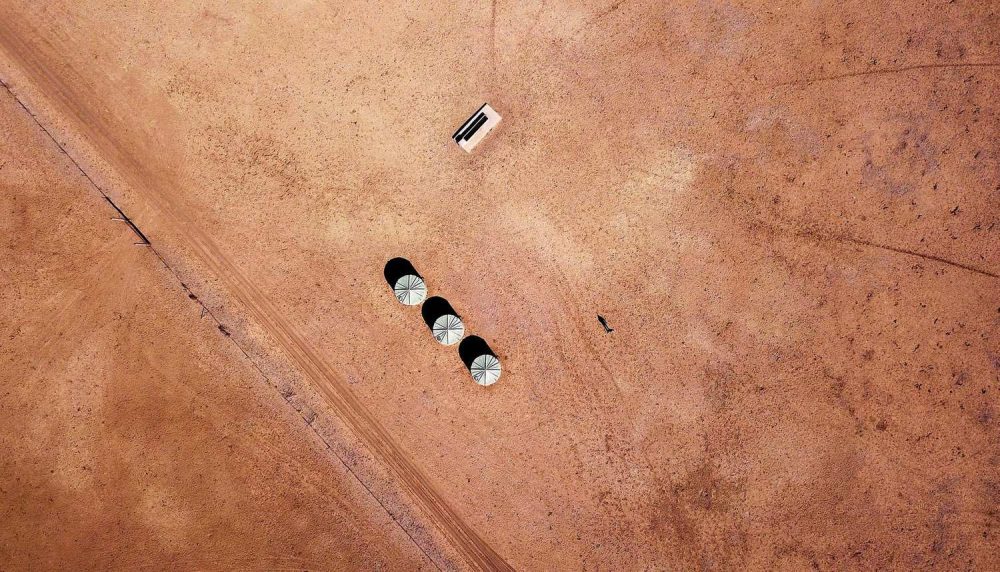 Jimmie McKeown walks near a water trough and tanks. ‘My great grandfather settled on this land in 1901, and he never had to remove cattle from the paddocks over there,’ said his mother, May, pointing to the west. ‘But we have had to remove them all and bring them closer to the homestead so we can more easily feed them.’ 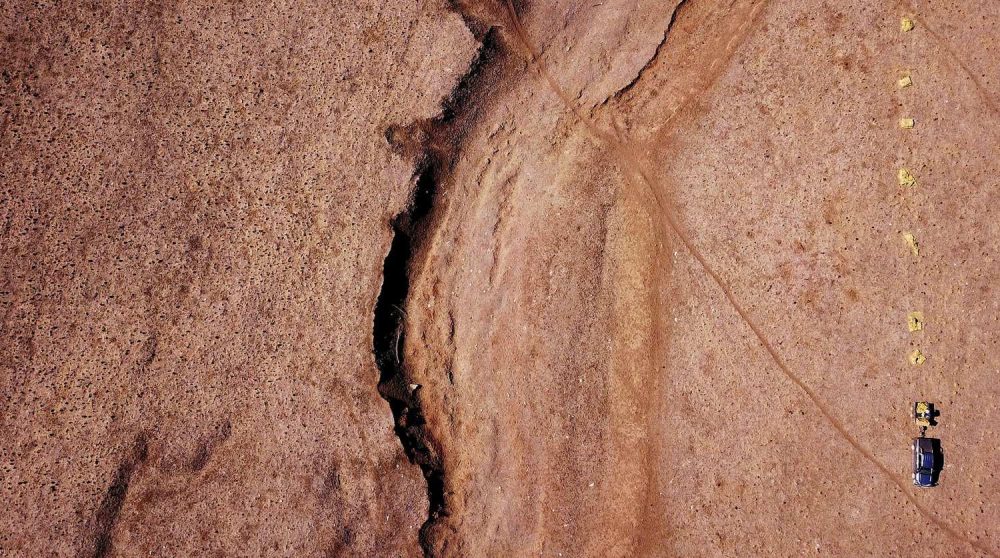 Scott Cooper drops hay for his cattle next to a dried-up creek in Gunnedah. The Australian Bureau of Meteorology said parts of Australia experienced the second warmest summer (December-February) on record and had just had one of the driest and warmest autumns (March-May) on record. 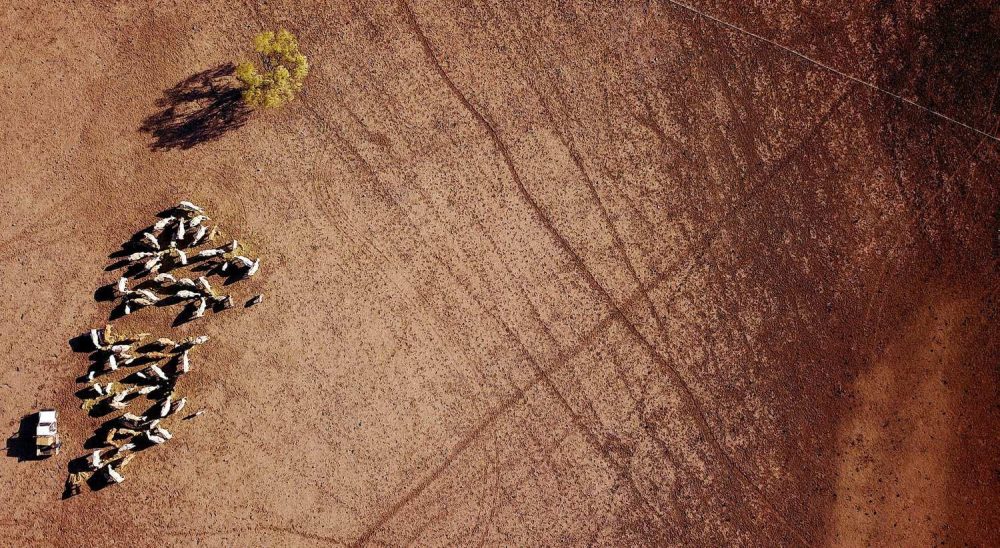 May McKeown feeds her remaining cattle. The McKeowns said they were extremely worried about the future, having had almost no rain since 2010. 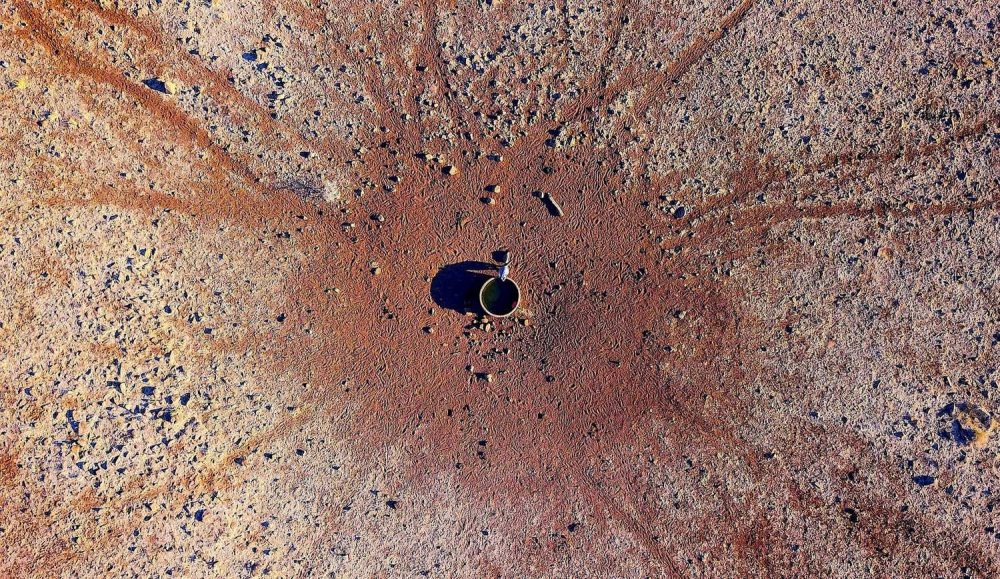 A kangaroo casts a shadow as it drinks from a water tank on Whitney’s property. 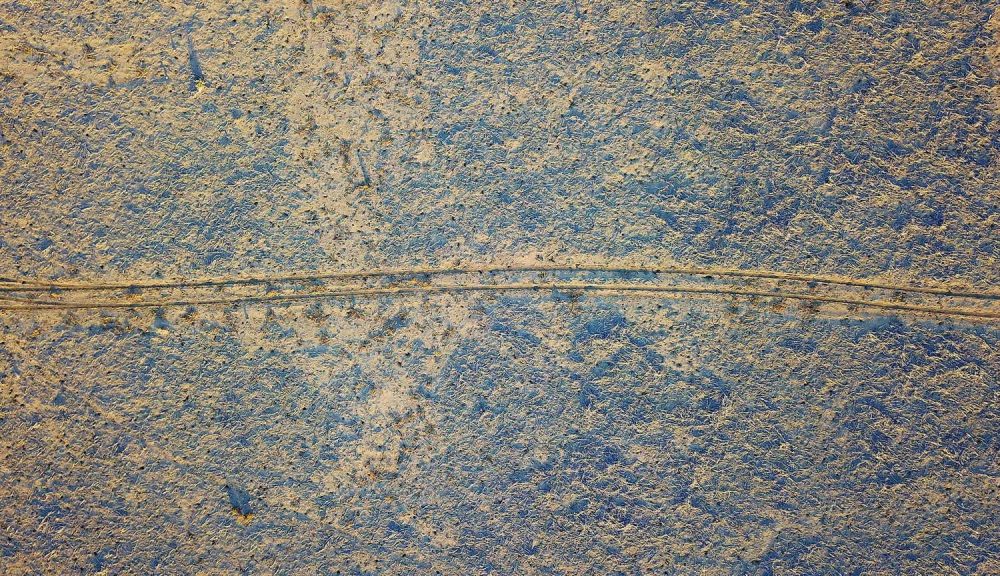 Tyre tracks from Jimmie McKeown’s truck. The farm has made little income in recent years and when it runs out of hay in a few months, rising hay prices will leave the family in a dire financial situation. 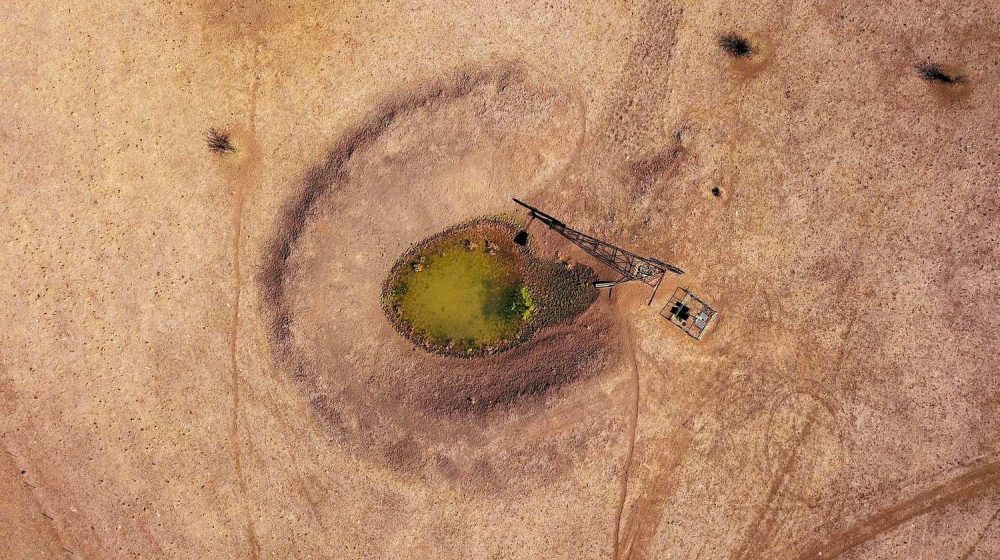 A windmill and solar panels stand next to a dam on Cooper’s property, South Park. 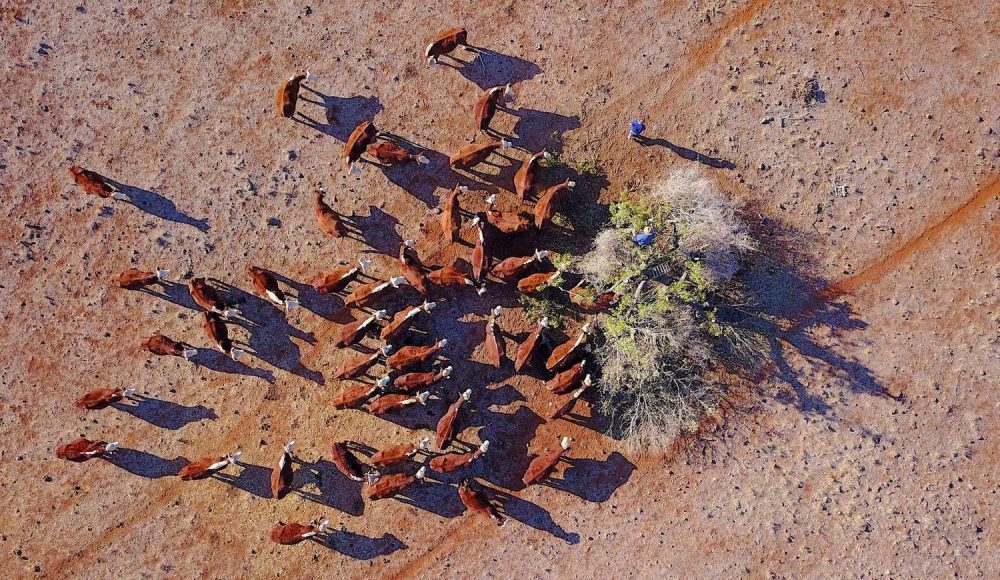 Whitney stands on top of a tree as he cuts off branches to feed his cattle. 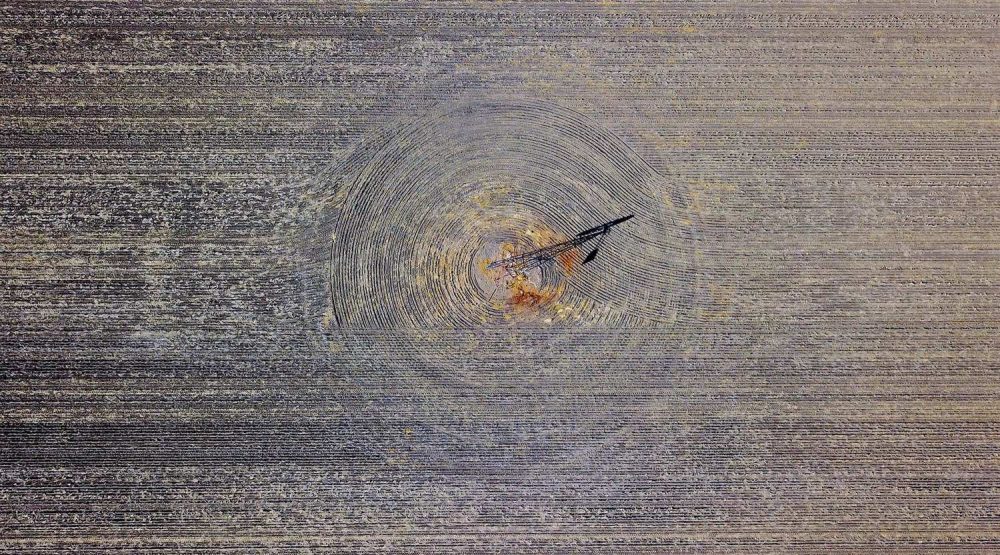 Plough patterns in a paddock. 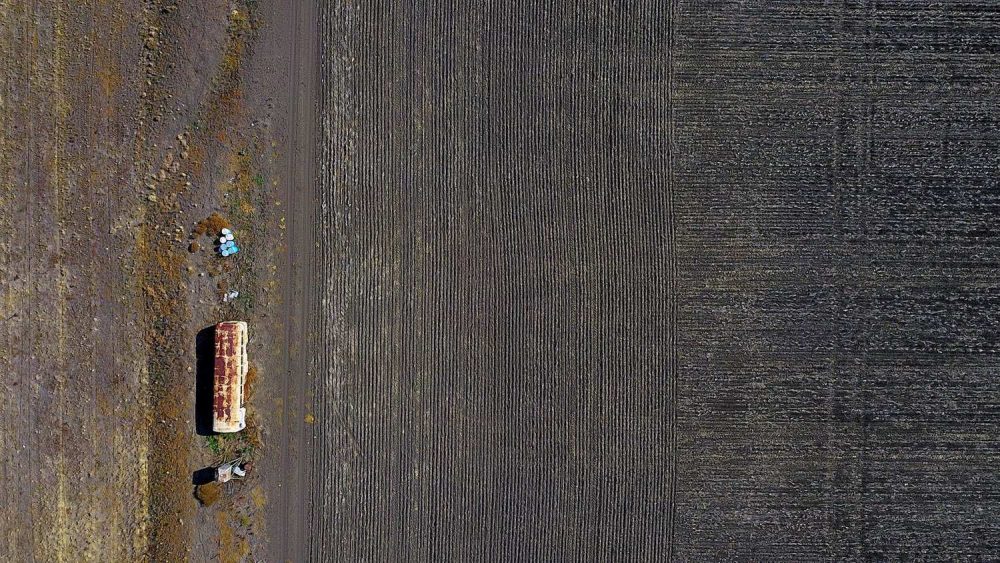 An old bus used for storing farming equipment stands in a paddock. 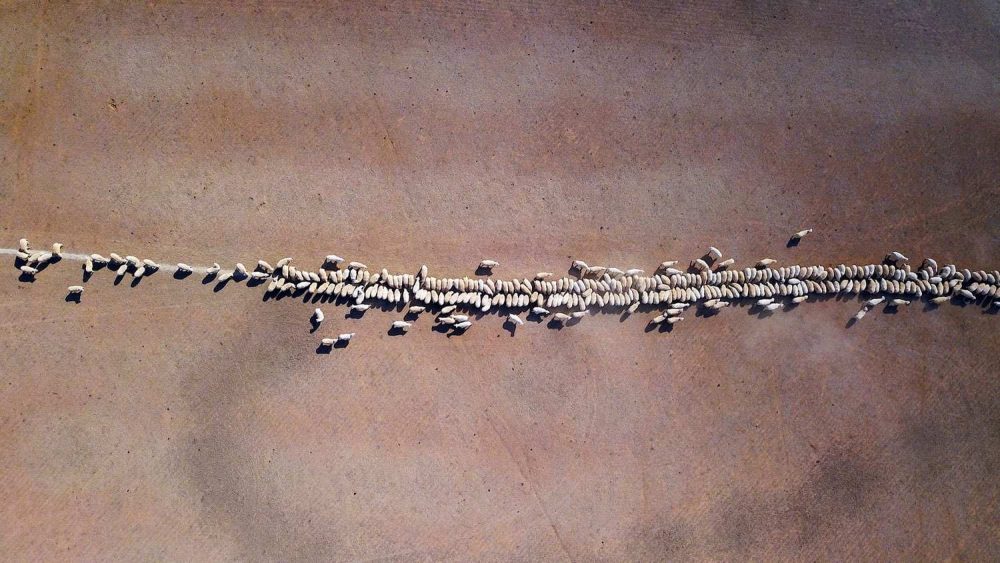 Sheep eat grain dropped on a farm on the outskirts of Tamworth. 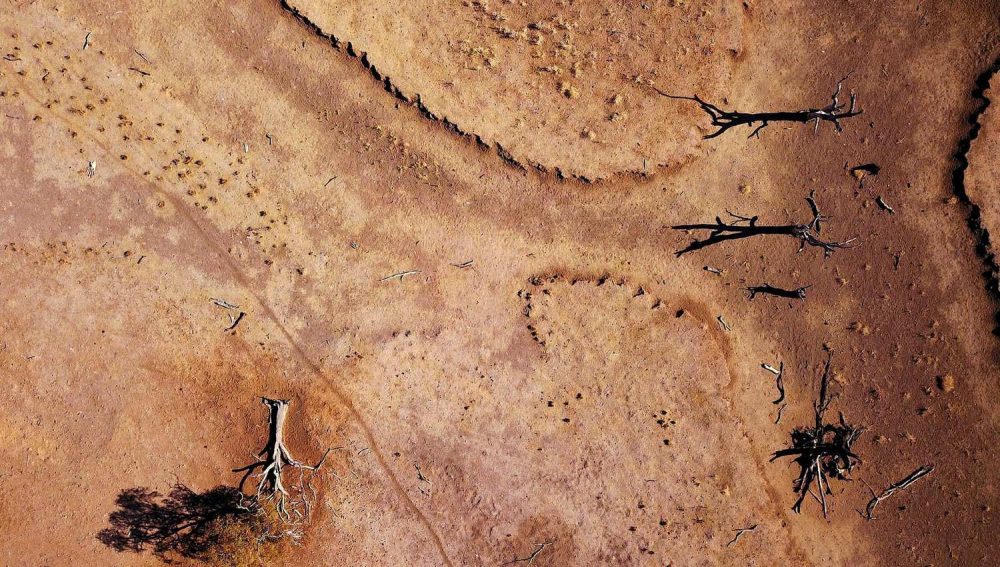 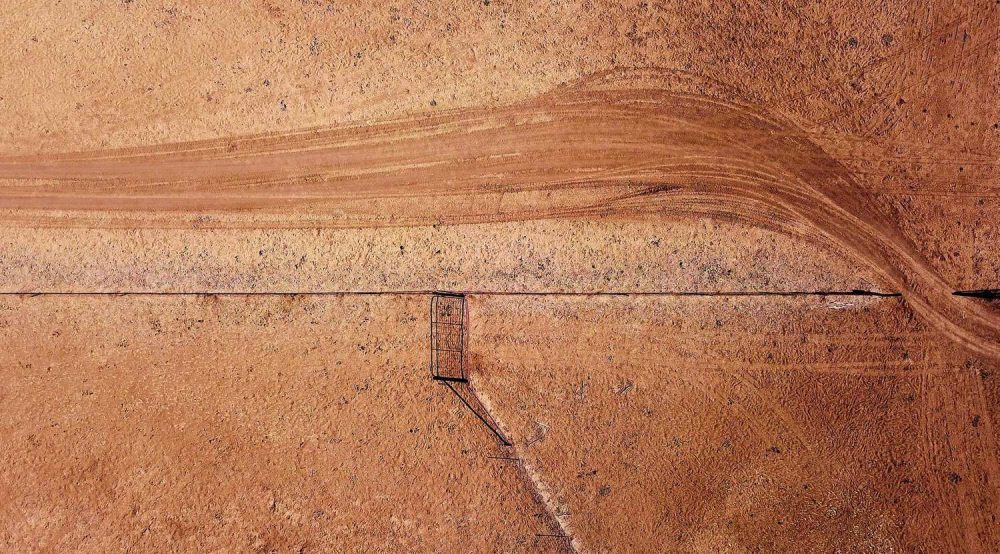 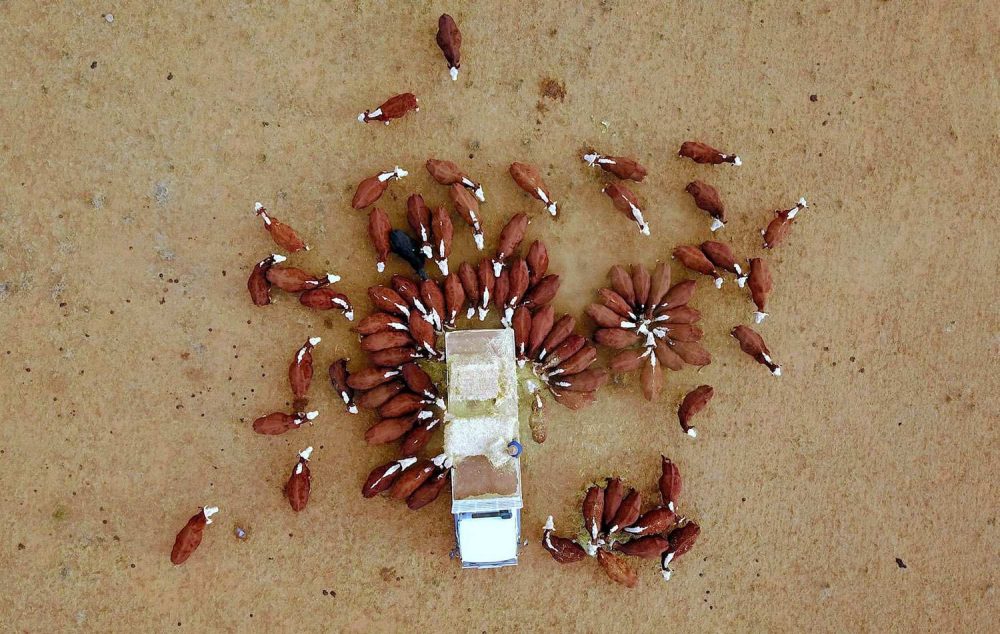 Ash Whitney stands on the back of his truck as he throws hay to his cattle. ‘I have been here all my life, and this drought is feeling like it will be around a while,’ said Whitney, whose property near the town of Gunnedah is on the usually fertile Liverpool Plains, which has received the lowest average rainfall in nearly 30 years.