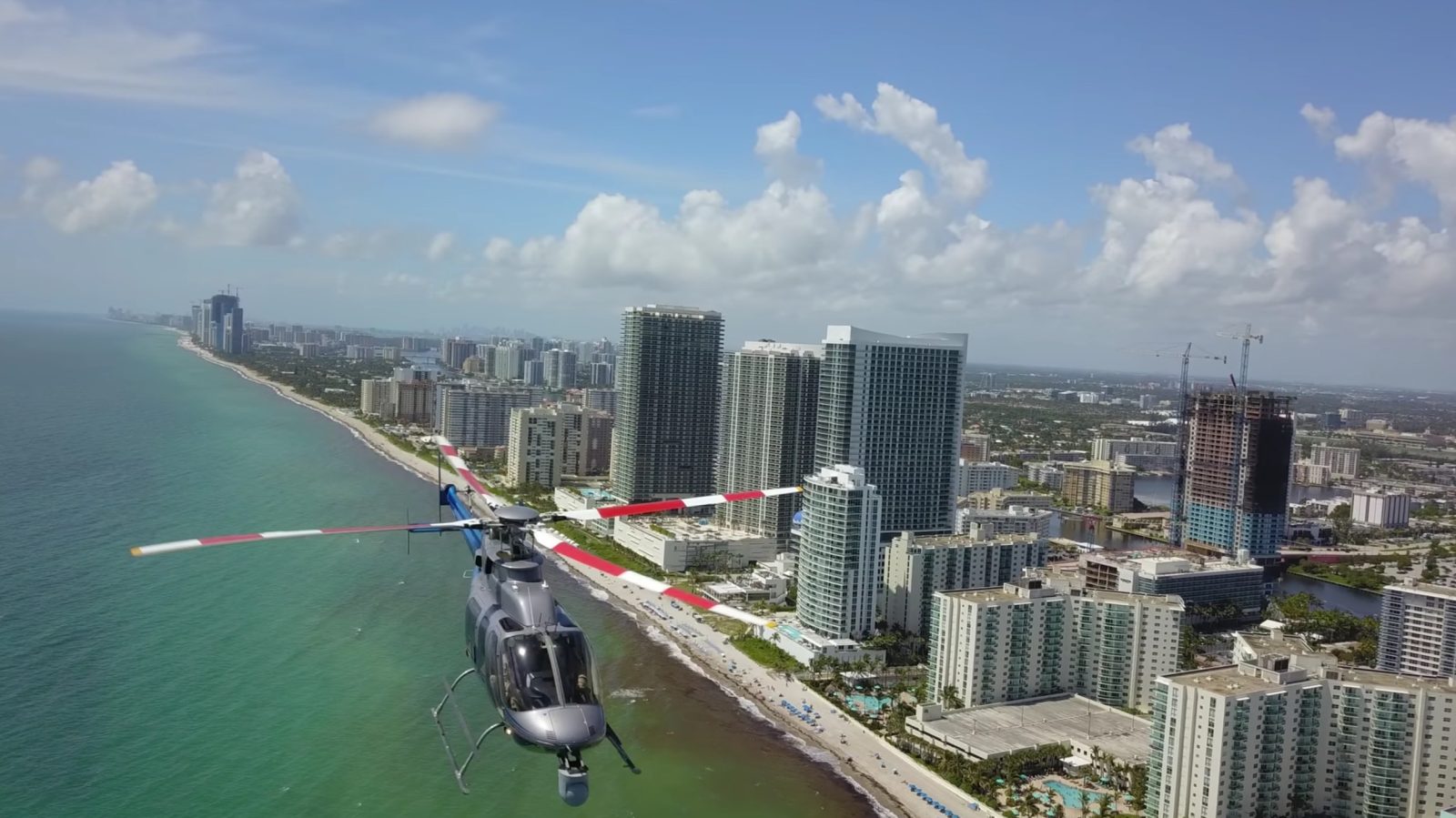 Check out this near-miss drone video that was just posted on YouTube yesterday. It shows you how a helicopter can quickly appear out of nowhere and come at you fast. All of a sudden, your leisure drone-flight along the Hollywood Beach, FL coastline, could potentially cause a tragic accident, guaranteed to make the headlines throughout the country. Luckily this one ended well, but it shows you how careful we all have to be when flying our drones in a congested airspace.

Yesterday, Masih Persian uploaded this video to YouTube of his drone flight along Hollywood Beach in Florida, capturing beautiful 4k footage with his DJI Mavic Pro Platinum. The video starts with him panning to the left and showing some of the condominium buildings along the shore. As he keeps moving the camera to the left, he is now facing south, toward Miami. It is unclear whether he did this because he heard the helicopter approaching or whether he was just capturing footage of the coast. Either way, on the left side of the screen, over the ocean, you now can see a small blip quickly coming towards the drone. On a 27″, 5K computer screen, this is clear to see, however, when you’re the one flying the drone and you are looking on your smartphone or tablet in bright sunlight, it would have been very difficult to spot the approaching helicopter and still have time to react.

We do not know where the pilot was positioned and whether he was able to see or hear the helicopter approaching, but it is obvious that it all happened so fast that you would not have had much time at all to respond and get out of the way. The helicopter is approaching the drone at a very high speed and it appears that the drone pilot might have been looking for the helicopter in an effort to avoid it, once he heard or saw it approaching. As the manned aircraft passes, Masih pans the camera to the right and we see the helicopter disappearing in the distance.

Update: it seems that Masih had removed the video. Good thing we have a copy.

From all the drone footage I have seen, I have never seen such a close call between a drone and a manned aircraft. the only more bizarre video is probably this one. As the helicopter passes by, it seems to be perhaps only 10 feet away from the Mavic Pro Platinum. Very scary stuff indeed.

Masih had this to say about the near-miss video:

Enjoying an afternoon flight with my drone around Hollywood Beach, FL. A private helicopter flew right into my drone. I guess I got lucky that day nothing has happened. Phewww

Mention that I was flying the drone under 400 feet altitude.

I guess I got lucky…

Obviously, Masih was not the only person who got lucky that day, as I’m sure the occupants of the helicopter will agree. Fortunately, this was a near-miss and nobody got hurt, but it should serve as a clear warning to all of us drone pilots to be very careful of our surroundings when flying in crowded airspace, as helicopters (and airplanes) may be coming at you suddenly and very quickly, leaving you with very little time to respond.

Some people on YouTube suggest that the video might be fake, but I doubt that based on the shadow from the helicopter in the water and also the way the rotor blades appear curved because of the frame rate of the recording.

Lastly, Masih says he was flying below 400 feet and based on a quick search on Google Maps and Airmap.io it seems that he was allowed to fly there (unless there was a TFR in place), although there are some heliports in the vicinity. We currently have no information whether the FAA is looking into this drone incident.

Update: apparently the FAA has already started an investigation according to Local10 news.