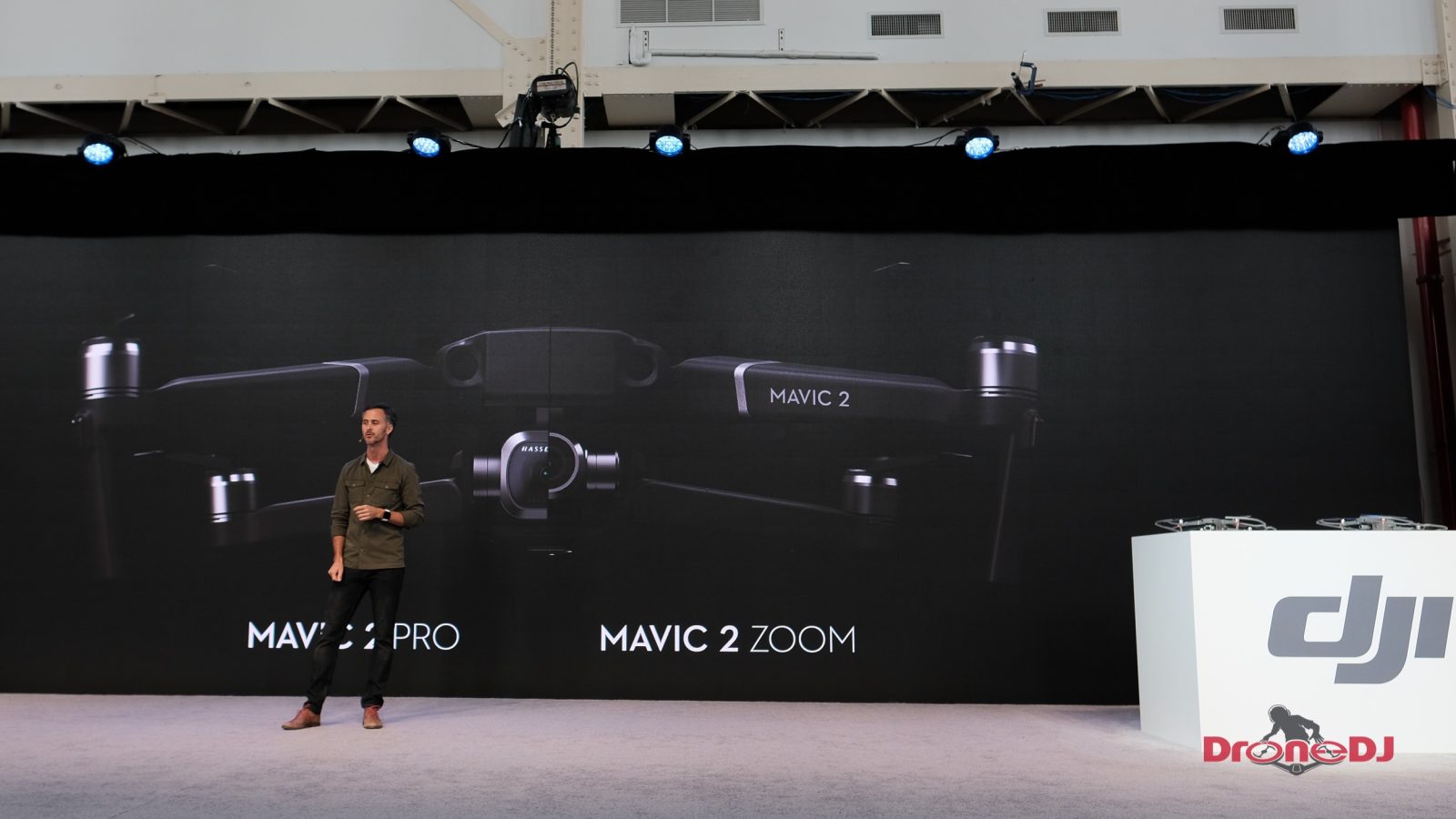 Today was the day of the long-awaited DJI global introduction of the successors to the original Mavic Pro, the DJI Mavic 2 Pro and the DJI Mavic 2 Zoom. Both versions are identical in terms of their body-style and flight capabilities. The difference between these two foldable drones comes down to their cameras. The Pro version has the Hasselblad camera with the 1-inch sensor and the Zoom version has a camera with an optical zoom lens from 24mm to 48mm and offer the unique Dolly Zoom effect. Both drones allow you to record hyperlapse videos. DJI’s new foldable drones have omnidirectional obstacle avoidance, fly faster, farther and for longer with a higher capacity battery and OcuSync 2.0. DJI has improved pretty much every aspect of the best selling original Mavic Pro and has come up with two outstanding drones that should get any drone enthusiast very excited indeed. The DJI Mavic 2 Pro retails for $1,449 and the DJI Mavic 2 Zoom sells for $1,249. There is also a special Fly More Kit available with extra batteries and other accessories for $319. DJI starts shipping today so you should be able to get your hands on one in only a matter of days. Does it get any better?

Make the Mavic 2 a flying D-SLR

DJI’s Michael Oldenburg opened today’s event at the Navy Yard in Brooklyn, NY with the amazing feat of Bartek Bargiel’s Mavic Pro that took the photo of the K2 Mountain at 27,600 feet elevation as well as the rescue of the mountaineer Rick Allen, who had been presumed dead. Than Michael moved on to the main part of the show, the introduction of the new drone but not before mentioning that at this point most of us probably already had seen images of the two new drones that they were about to introduce. Without wasting too much time, Michael explained how after the launch of the original Mavic Pro DJI’s designers and engineers went back to the drawing board and started to figure out how they could further improve their first iteration of the foldable drone. During the design process, the team sought feedback from photographers and videographers around the world and their message was simple and clear:

“Make the next version of the Mavic Pro better in every aspect. Get as close as you can to a flying D-SLR that you can take with you on your travels and adventures.”

That is exactly what DJI set out to do and by the looks of it, they succeeded. The new Mavic 2 Pro and Zoom drones are better in every respect when compared to the original. Let’s dive in and take a closer look! 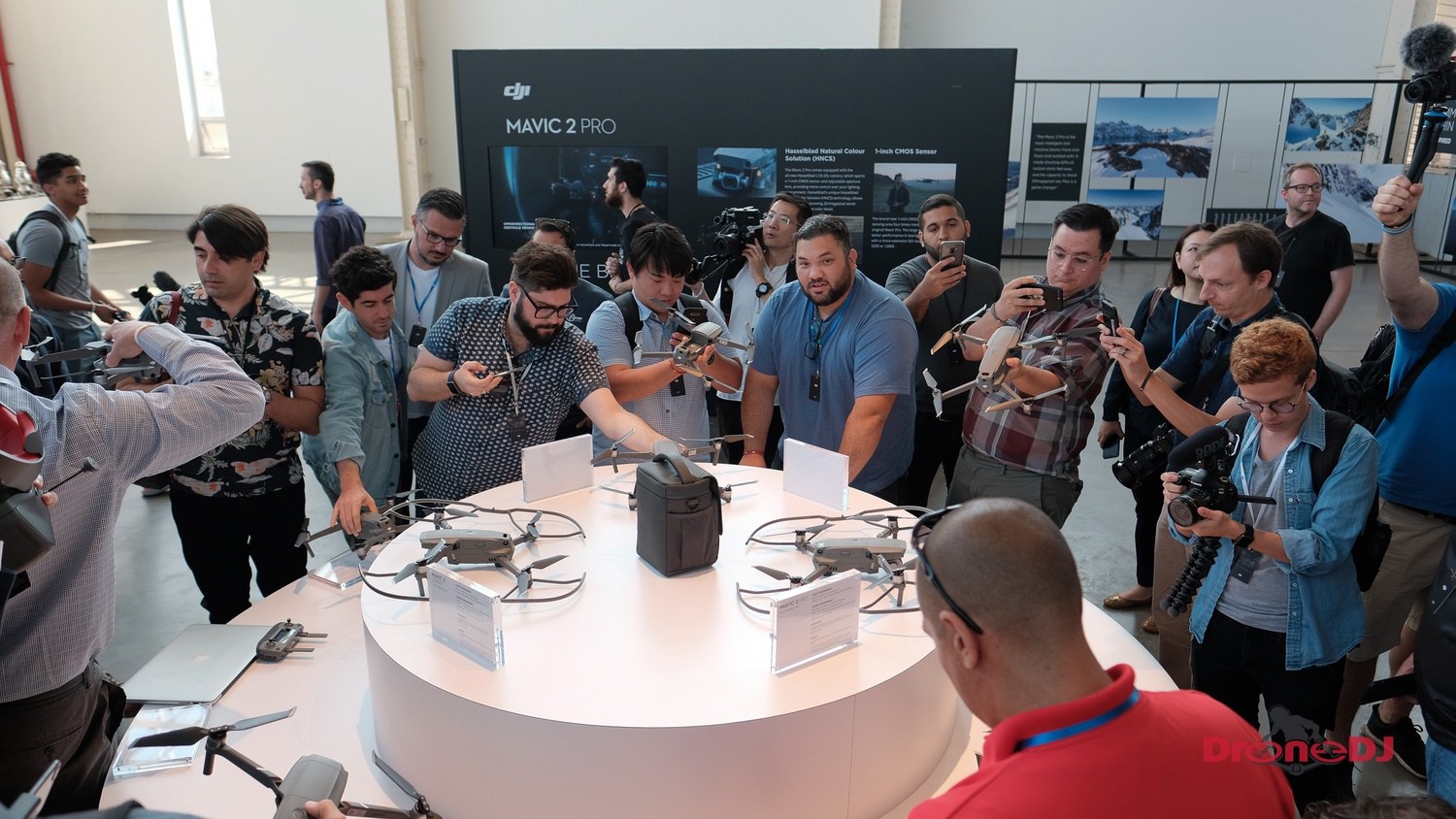 The design and flying capabilities of the Mavic 2

The new Mavic 2 Pro and Zoom versions have the exact same body. The only difference is in the camera/gimbal. The new drone looks very similar to the original Mavic Pro but feels more solid and slightly more rounded and aerodynamic. According to DJI, they were able to reduce body drag by 19% with the new design, resulting in a higher top speed of 44 mph (or 72 km/h) in Sport mode. The folding mechanism of the Mavic 2 is in principle the same as with the original but feels a lot more robust. The battery has increased both in size and capacity, allowing the new Mavic to stay in the air for up to 31 minutes versus 27 for the original Mavic Pro and 30 for the Platinum Edition. With DJI’s new OcuSync 2.0 you are able to fly the Mavic 2 Pro and Zoom to up to 5 miles (or 8 kilometers) away with a live video feed of 1080p. An improvement both in quality and distance compared to the original Mavic Pro, albeit at the expense of a slight weight increase as both models weigh a little over 900 grams. The drones now also include 8GB of internal storage and a micro-SD card slot. So even when you forget your memory card, you are still covered. The LED lights have been redesigned and relocated to the end of the legs for the rear two lights. They have also added a Bottom Auxiliary Light that turns on automatically to ensure safe and precise landings in low-light situations. Lastly, both models come with the quiet propellers making this the least intrusive DJI drone ever.

Now, let’s take a look at the Mavic 2 Pro. It has the Hasselblad camera with the 1-inch CMOS sensor that will provide more resolution and a higher dynamic range (14 stops). It shoots 20MP stills and is able to record 4K UHD video at 30fps (not 60fps unfortunately). The camera has an adjustable aperture from f/2.8-f/11 and offers 10-bit Dlog-M and 10-bit HDR video at 100 Mbps. Both editions record 4K video at higher bitrates with advanced H.265 compression. The Hasselblad camera offers you four times as many levels of colors per channel compared to the original Mavic Pro, to provide you with more freedom and flexibility in post-production. If you are looking for the ultimate image or video quality in a portable, foldable drone, this is the one to get. 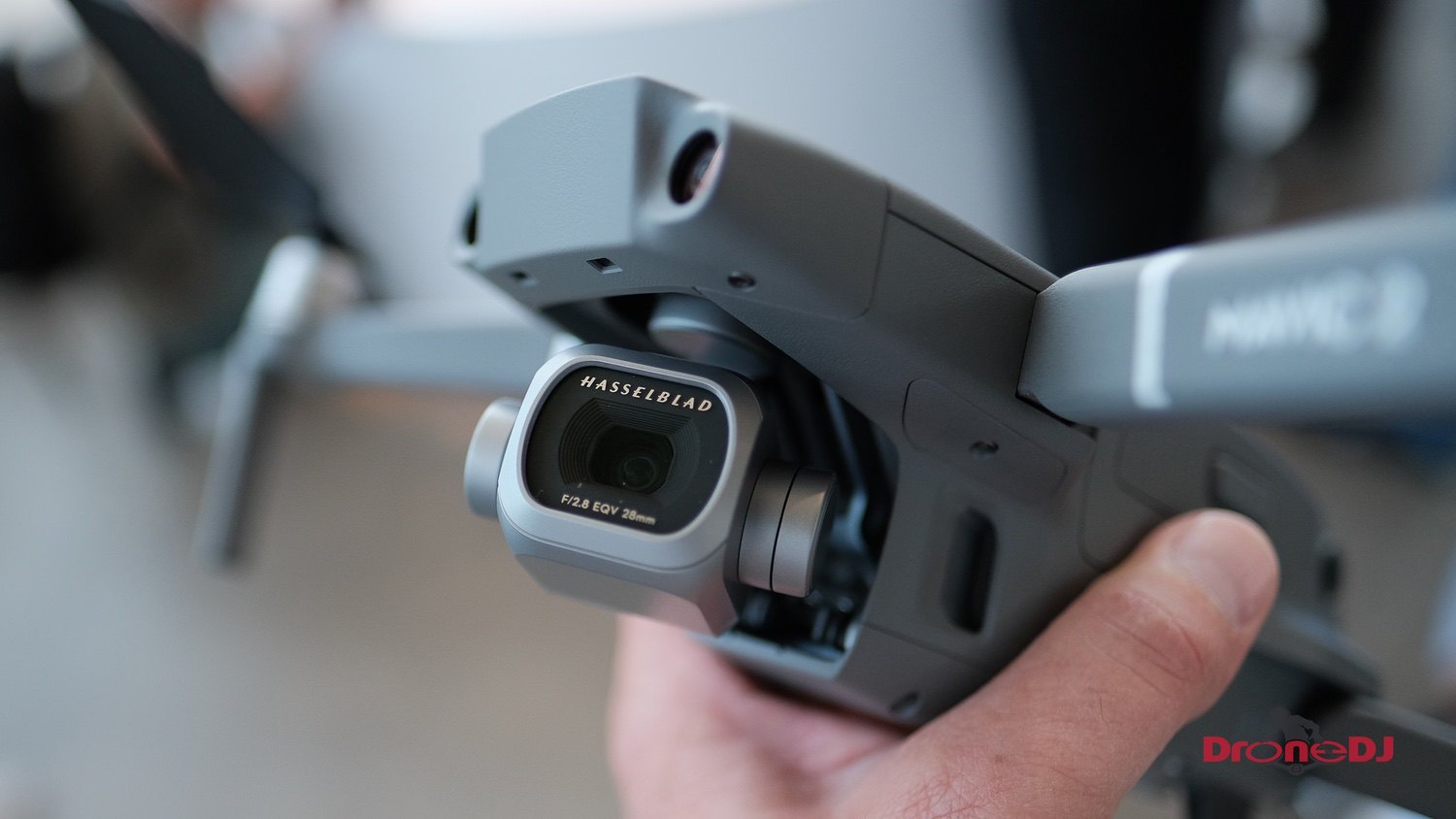 The Mavic 2 Zoom is the slightly less expensive version with a 1/2.3″ CMOS sensor (13 stops) that is able to shoot 12MP stills, 4K video and has an optical zoom lens from 24mm to 48mm. Digitally it can be zoomed even further to 96mm, but at that point, you will lose the ability to record video in 4K. A unique feature of this version is the Dolly Zoom effect that recently has become quite popular in video production. It is an effect for which you typically needed expensive film equipment but that can now be achieved with an off-the-shelf Mavic 2 Zoom (or Parrot Anafi) drone. Very cool indeed.

Both the Mavic 2 Pro and Zoom are able to record hyperlapse videos with a press of the button. You can choose from four different options:

The new Mavic 2 Pro and Zoom drones now come with ActiveTrack 2.0 which is an enhanced auto-track feature that keeps a moving subject in frame while following it and avoiding obstacles. DJI had this to say about the drone’s ability:

“Using the main camera and the front dual vision cameras, the Mavic 2 creates a three-dimensional map of the area in front of it, and uses new trajectory algorithms to analyze motion and predict the subject’s path up to three seconds in the future. When tracking a target, the Mavic 2 can recognize and avoid obstacles while shooting your target without interruption. It can stay on target, even if your subject momentarily goes behind an obstacle, and can track the subject at higher speeds of up to 44 mph (72 km/h).”

During the event, DJI showed the Porsche car chase video, with they said was captured with ActiveTrack 2.0, implying that this time around the drone will not only follow you when ascending but also when descending and of course avoiding any obstacles along the way. We will be sure to test this out shortly. 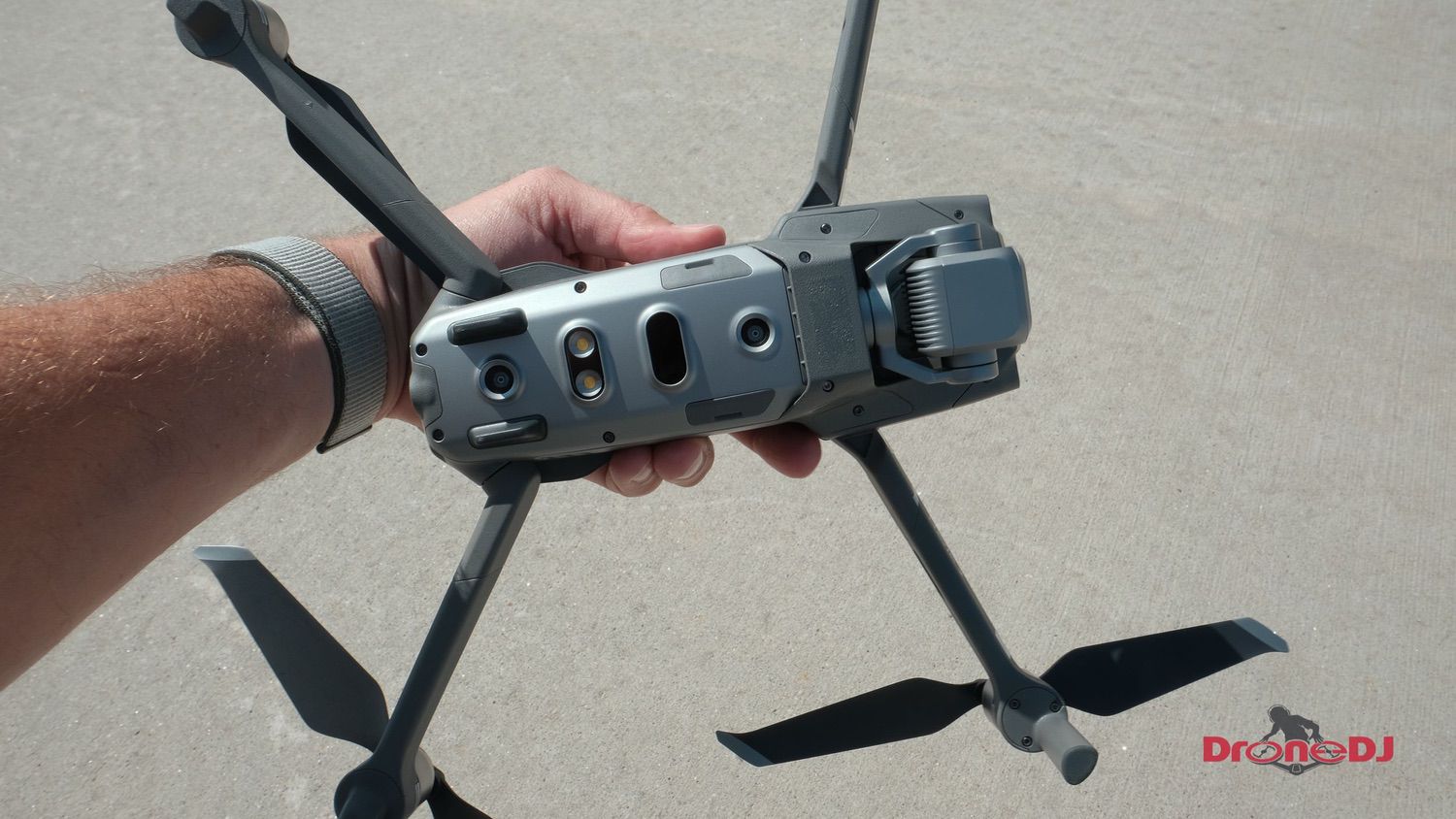 The Mavic 2 Pro and Zoom drones have omnidirectional obstacle avoidance that uses the following 10 sensors to keep you out of trouble.

DJI introduces the new OcuSync 2.0 video transmission system that provides an even more stable connection between you (with the controller in hand) and the drone. the new system is less sensitive to interference and automatically switches between 2.4 GHz and 5.8 GHz frequency bands with the capability to use different frequencies for uplink and downlink data streams. With OcuSync you should be able to fly your Mavic 2 Pro or Zoom up to 5 miles away and maintain a 1080 live video feed.

At end of the event, we had the opportunity to try out the new Mavic 2 Pro and Zoom drones. If you are at all familiar with DJI drones you will feel right at home behind the controls. In terms of how the new Mavic flies, well the first thing you notice it how much quieter it is than the original Mavic Pro. Those low-noise props make quite a big difference! Once in the air the Mavic 2 feels fast and nimble. I flew it out over the East River towards Manhattan and it was quite windy with gusts of up to 20 mph. It did not bother the Mavic 2 one bit. On the way back, I flew it in Sports mode and it really picked up speed. Once I got close to the landing zone, I put the brakes on and the Mavic 2 responded quickly and decidedly. It is a very confidence inspiring drone to fly. At no point in time, did I lose the connection or did I feel that the drone did not respond accurately to my inputs. Meanwhile, there were a number of Mavic 2’s in the air simultaneously and there is all kind of interference in an urban environment like Brooklyn, NY. I walked away from today’s event very impressed and I’m looking forward to testing this new drone extensively in the near future. Btw – the one I flew was the Pro model.

At one point during the hands-on session, the sky became pretty crowded with a seaplane, a helicopter and some Mavic 2’s in the sky. The DJI drones were restricted to an altitude of 170 feet and the company reportedly had to pull quite some strings to allow us to fly here in Brooklyn, New York.

DJI told us that if you buy the Zoom or the Pro model and at some point decide that you want to change the camera, they can do that for you. You just need to send it to DJI and they will swap it out for you. We no information on the associated cost. Talking about gimbals, the new Mavic 2 still comes with a, slightly less, clumsy plastic gimbal cover…

The DJI Mavic 2 Pro retails for $1,449 and the DJI Mavic 2 Zoom sells for $1,249. There is also a special Fly More Kit available for an additional $319 with two extra batteries, a car charger, additional low-noise props, a shoulder bag and the option to turn your batteries into a power bank.

DJI started shipping today so you should be able to get your hands on a new Mavic 2 Pro or Zoom in a matter of days. Does it get any better?

What do you think about the new Mavic 2 Pro and Zoom models? Let us know in the comments below.