DJI Inspire 2 drone shot out of the air in Ohio 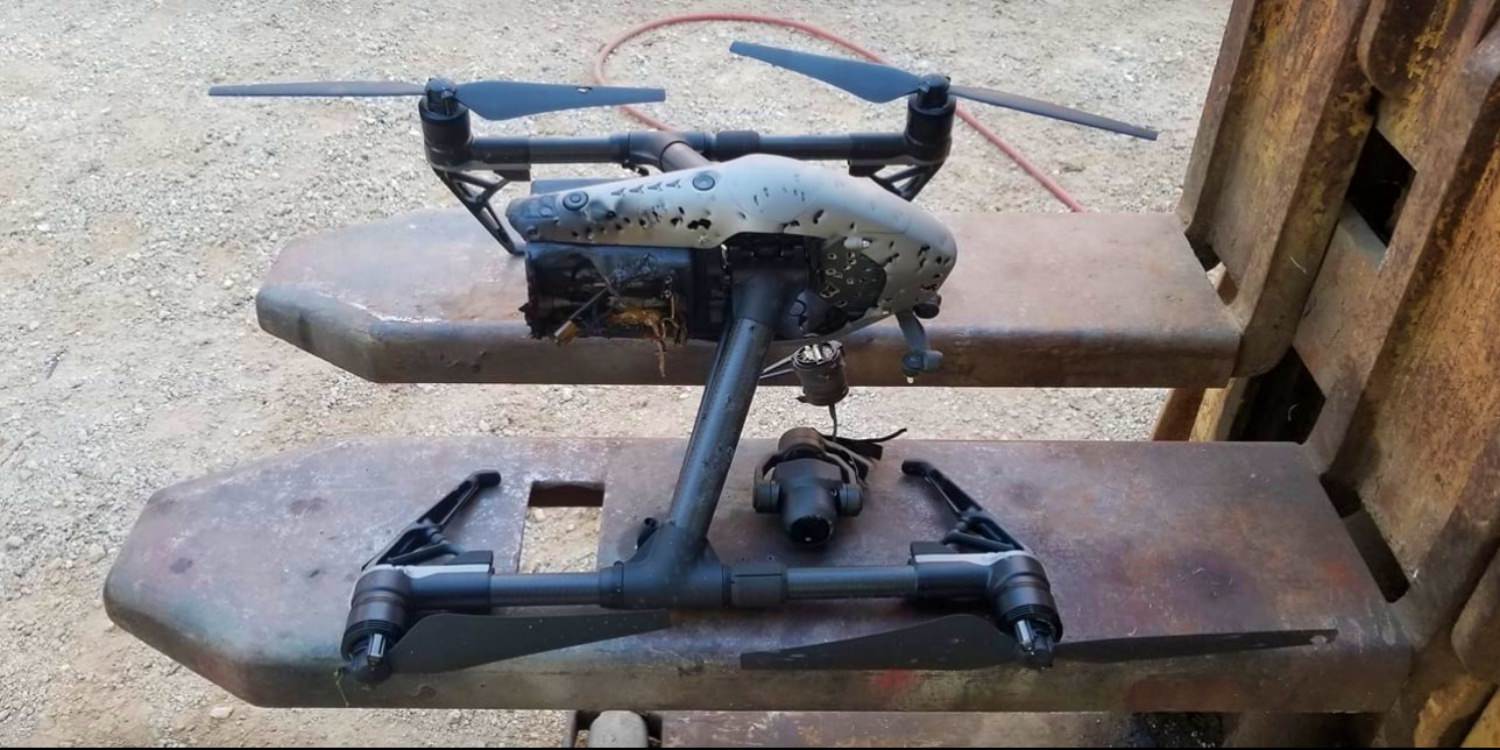 According to a post from Rick G. on Facebook, his DJI Inspire 2 was shot out of the air by an angry neighbor in Ohio last night. The drone crashed down to earth from about 168 feet high. The aircraft, as you can see in the photo was heavily damaged as a result. The pilot has a pretty good idea who had shot down the drone. He went to the house and finally got his Inspire 2 back after the neighbor first denied shooting it down. The drone pilot then turned to Facebook for advice.

Here’s what the drone pilot had to say about yesterday’s incident:

“So this happened tonight SHOT out of the sky while documenting a bridge construction in my neighborhood made a police report but they’re not sure where to go with it turning it over to prosecutor tomorrow what can I expect?”

According to the posts on the social media network, the drone operator checked his flight log and went over to the house that was close by to where his flight had abruptly ended. Apparently, the neighbor first denied having short down the drone, but then changed his story, admitted to having it shot down and returned the Inspire 2 to the owner. The drone pilot said the following about how this went down:

According to the drone pilot, the angry neighbor offered the following explanation for having shot down the aircraft:

What to do next?

As expected, other people on Facebook expressed their outrage over the incident and were quick to chip in with advice, ranging from:

Reading through the advice from various people, it seems that one should not expect much to happen on a federal level and that perhaps the best results can be achieved by working with the local police first.

DroneDJ does not offer any legal advice for cases like these as we lack the required expertise and experience. We do however want to share stories like these with the overall drone community because it is a serious offense. And, this can (and has) happened to other drone pilots as well, elsewhere in the country.

Fyi – we did reach out to Rick to find out what actions he has taken next. We will update this post when we hear back from him.

“I’d like to take a minute to thank those of you that are taking an interest in my situation. Most of your advice has been helpful, some has been amusing but still mentally helpful. I think I’ve been taking this pretty good considering, but the reality is starting to set in today that no matter how this goes I probably won’t be flying an I2 for a while that was a pretty big chunk of change for a hobbyist/aspiring drone pilot and sadly I won’t be just going out and buy a replacement I’m going to have to see how this plays out. And even in the small claims court route I may get the judgment but realize sometimes that’s not the end of it I still have to get them to pay up.

As for a little update, there’s not much to report I’ve started going through the proper channels making reports Sheriff’s Department and FAA now I guess I just wait for a response.

One thing’s for sure the Drone Community is GREAT! I’ve heard from a lot of people from across the country some that I’ve even turned to on Facebook and YouTube in my quest for drone knowledge.

In closing thanks again and I’ll try to keep you all updated hopefully we can get some action taken not only in my case but to prevent any of you from having to go through something similar and education to the public of what this drone hobby and business is all about.”

Related cases of drones being shot at

In a similar case that happened in Oregon last year, the shooter had turned himself in at the local police station. He was subsequently jailed on one count of criminal mischief in the first degree (a Class C felony). The case was also forwarded to both the County’s District Attorney’s Office and the Federal Aviation Administration, by the sheriff’s office.

In another related case, a drone was shot at in Florida because a homeowner feared for his family’s privacy. Surprisingly, no charges were filed against the homeowner, but deputies did tell him it was illegal to do so and they discussed the “proper use of a handgun.”

Lastly, a Forbes article from more than two years ago states that the FAA confirmed that shooting a drone is, in fact, a federal crime and cited 18 USC 32. According to that statute, it is a felony to damage or destroy an aircraft. In the same article, Loretta Alkalay, an aviation attorney who teaches Drone Law at Vaughn College of Aeronautics and Technology is quoted as saying that interfering with anyone “engaged in the authorized operation of such aircraft” and carries a penalty of up to 20 years in prison.

If you are a lawyer or you have had your drone shot out of the air and have experience with what to do next, we would love to hear from you in the comments below or send us an email.