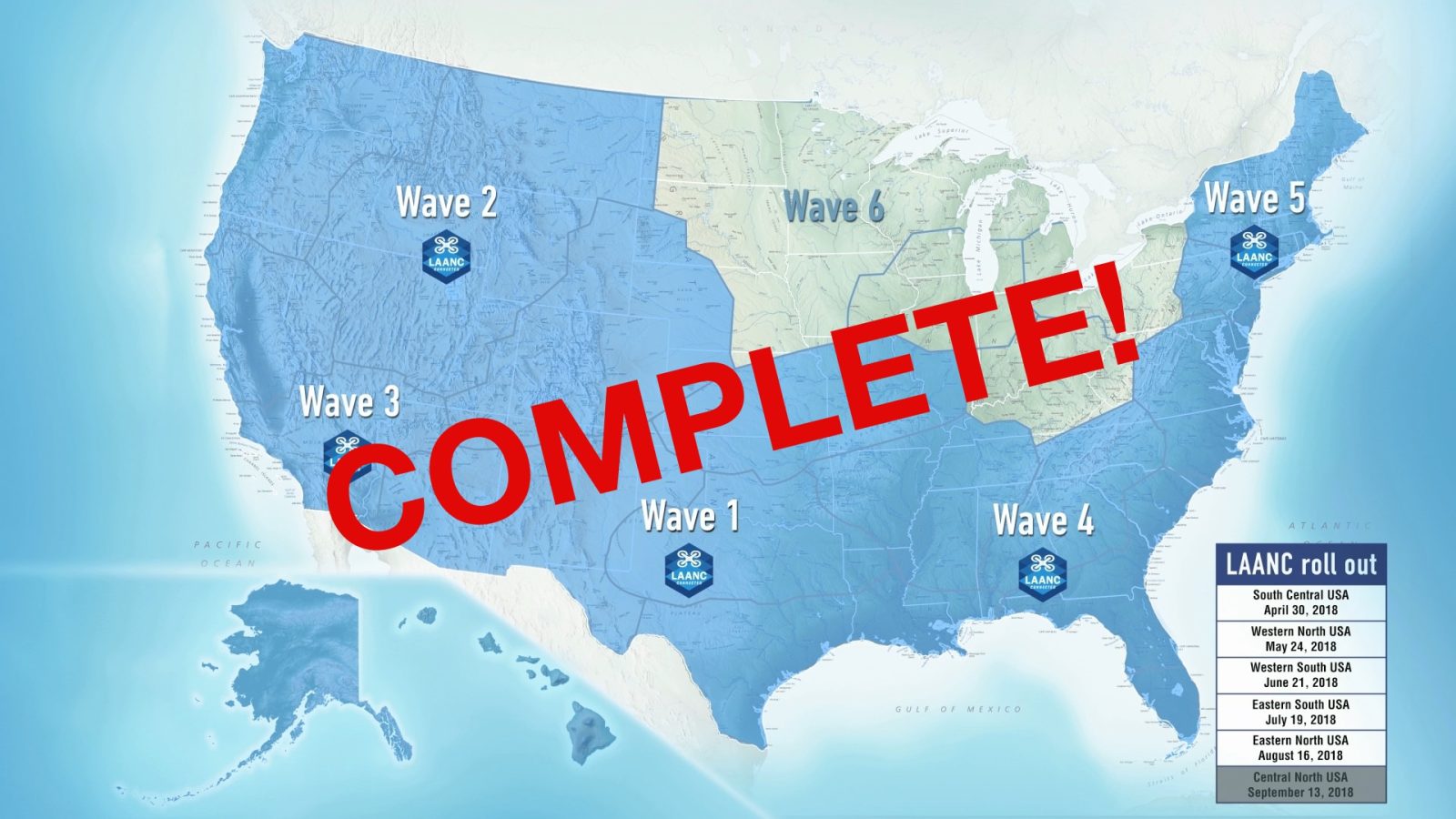 Last week during InterDrone, Dan Elwell, the Acting Administrator of the Federal Aviation Administration (FAA) had stated that the Low Altitude Authorization and Notification Capability or LAANC roll-out would be completed before the end of the month. Well, it seems that the FAA is ahead of schedule. As of today the Central North States have been activated. This is the last region to come on board. LAANC is now available for commercial drone operators nationwide. Allowing pilots to get near real-time approval for their flight plans. In the past, the approval or waiver process used to take weeks if not months. The availability of LAANC throughout the country represents a huge milestone in the development of commercial drone applications.

LAANC opens up 99% of the national airspace

The FAA started with a LAANC test late in 2017. Going into 2018, the government organization has been rolling out the program out quickly in six successive waves. Today marks the completion of the LAANC roll-out with the Central North States region thas was added in the sixth and last wave.

Through LAANC commercial drone operators who have a Part 107 license will be able to get FAA approval for their flights in near real-time. What used to take weeks, can now be completed in seconds. This represents a huge breakthrough for commercial drone operators, who previously had difficulty planning their missions for customers because they could not be sure when the FAA approval would come in. Making it very hard to plan and promise to a customer when they would receive their drone services.

Many industries will benefit from LAANC

As of today industries such as real estate, insurance, construction, telecommunications, agriculture and more will be able to incorporate drones into their business practices. With the completion of the LAANC roll-out, 99% of the national airspace is now open for drone business

Drones will not only benefit these businesses with time and money saved. Lives will be saved as well. Professions such as home inspections will become a lot safer when drones are used instead of people. According to the International Association of Certified Home Inspectors,164,000 inspectors in the U.S fall off ladders every year. 300 of them do not survive the fall.

Acting Administrator of the FAA, Dan Elwell said in a tweet today that:

“Aviation is evolving at the speed of innovation. And drones are transforming how the private sector and government work. Most importantly it’s our collaboration that keeps our skies safe. the FAA has delivered on the commitment I made on April 30th to expand the low altitude authorization and notification capability nationwide. I’m pleased to announce that LAANC has been successfully expanded to 288 FAA air traffic facilities and approximately 478 airports. LAANC is a technological solution that helps us safely integrate drones into our airspace. It gives our air traffic controllers visibility into where and when authorized drones are flying near airports so that they can have more flexibility plan their flight operations. Drone pilots using LAANC can receive authorization to fly in certain airspace in near real-time. What used to take weeks now takes mere seconds.”

During InterDrone, I spoke with a number of commercial drone operators who have used LAANC in the past through apps from Airmap or Skyward. All of them were very pleased with how fast and painless the online approval process is and praised the FAA for implementing the system so quickly.