Wash your windows with an Aerones drone The San Fransisco based company Aerones is developing a drone to clean the windows of high rise buildings. They claim their drone can clean windows 20 times faster than humans all while being much safer. They believe the technology they have developed can also be used to help fight fires, as well as clean, de-ice and paint wind turbines.

The Aerones drone is quite large. It has 14 rotors and its box frame is roughly 3 meters by 3 meters. It tips the scales at 90 kg (121 lbs). Because of its large size, it can be tethered to the top of a building should something happen it won’t crash to the ground. The pilot on the ground can view an HD video feed from a 5G connection on the drone. Both water and electricity are fed to the Aerones drone from hoses and wires on the ground. Watch the it in action in Riga, Lativa below.

Aerones was founded by Dainis Kruze and Janis Putrams, in 2015. Aerones has offices San Fransisco as well as Riga, Latvia. Their main focus is on building drones that can lift payloads of up to 200 kg (441 lbs). The build both ground tethered drones as well as battery-powered drones. Their focus is on industrial applications as well as search and rescue operations. 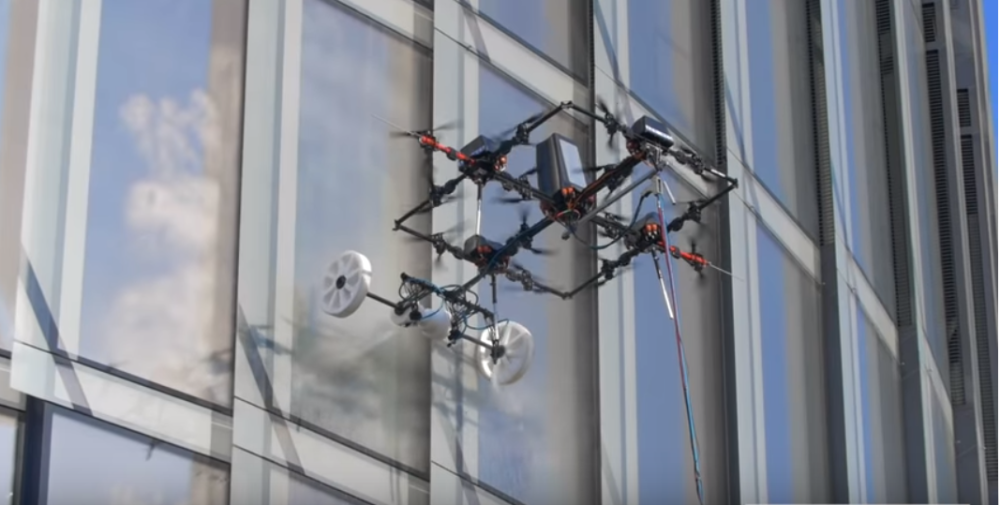 This Aerones drone is the second window washing drone we have seen. Back in May a 19-year old Australian won Intel’s ISEF’s top award by developing a window washing drone. The idea is definitely one that merits consideration. Having a drone to perform high-height tasks is certainly safer than putting peoples lives in peril. There is even a place for it in the consumer market. My wife tried to convince me to outfit my Mavic 2 Zoom to wash the windows at our house. Hopefully, this technology continues to develop to make our lives safer and easier.