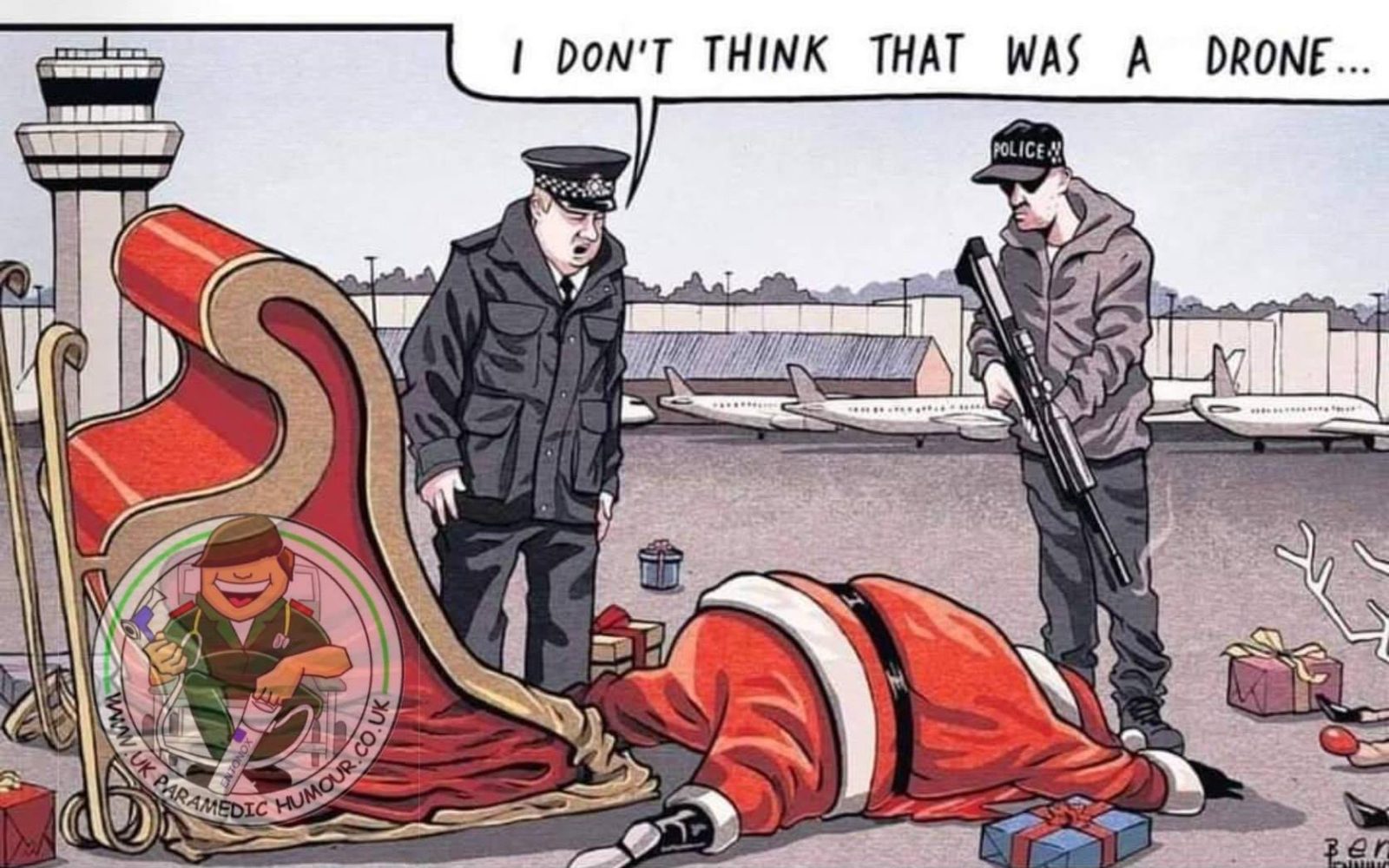 A cartoon perfectly sums up the Gatwick Airport fiasco. It was posted by UK Paramedic Humour on Facebook and it shows one police officer saying to the other policeman holding a smoking rifle: “I don’t think that was a drone…” as the two are looking down on a Santa and his crashed sleigh and reindeer. In the background, you can see Gatwick Airport.

As of Monday evening (in England), it still has not been confirmed that a drone, in fact, was to blame for all the disruptions at the airport. No photos or videos have been made public that show the drone. There have been 67 sightings of a drone near or over the airport property between December 19 to 21. These sightings are actively being investigated by the Sussex Police.

The Sussex Police issued a second statement on Monday in which they strongly denied that the disruption at the airport may have been for nothing. Deputy Chief Constable Jo Shiner said:

“We can unequivocally state that there have been numerous illegal drone sightings at the airport over three days from December 19 to 21. There were numerous reports clustered around 37 occasions where a drone or drones were seen and I am keen for those responsible to be brought to justice.”

The couple that was arrested late Friday evening has been released after having been found innocent. Their names and photos, however, had already been made public by a number of British news outlets and media people.

In an interview with Sky News, the couple said:

“As you can probably imagine, we are feeling completely violated. Our home has been searched, and our privacy and identity completely exposed. Our names, photos and other personal information have been broadcast throughout the world.”

“We are deeply distressed, as are our family and friends, and we are currently receiving medical care. Post released without charge or further action, we are totally overwhelmed by the support we have received from the people all over the world and we would like to thank every single one that has done that.”

“We would ask that the press please respect our privacy and leave us to try and get through Christmas as best we can and no further comments will be made at this time. Thank you.”

The Gatwick Airport Fiasco to be continued

In the Telegraph, the entire situation is referred to as the Gatwick Fiasco. Not only the police, but even the army was sent in to help and catch the culprit(s) who flew the drone nearby and over the airport. Gatwick Airport has even offered a £60,000 reward for information leading to the arrest and conviction of those responsible for disrupting that travel plans for about 150,000 passengers.

It remains to be seen if the drones and their operators responsible for the chaos at Gatwick will ever be caught if there even were any, to begin with.

What is clear at this point though is that Gatwick Airport (and very likely many other airports as well) is wholly unprepared to deal with rogue drones. And from that point of view, the cartoon is spot on in displaying the Gatwick Airport fiasco.