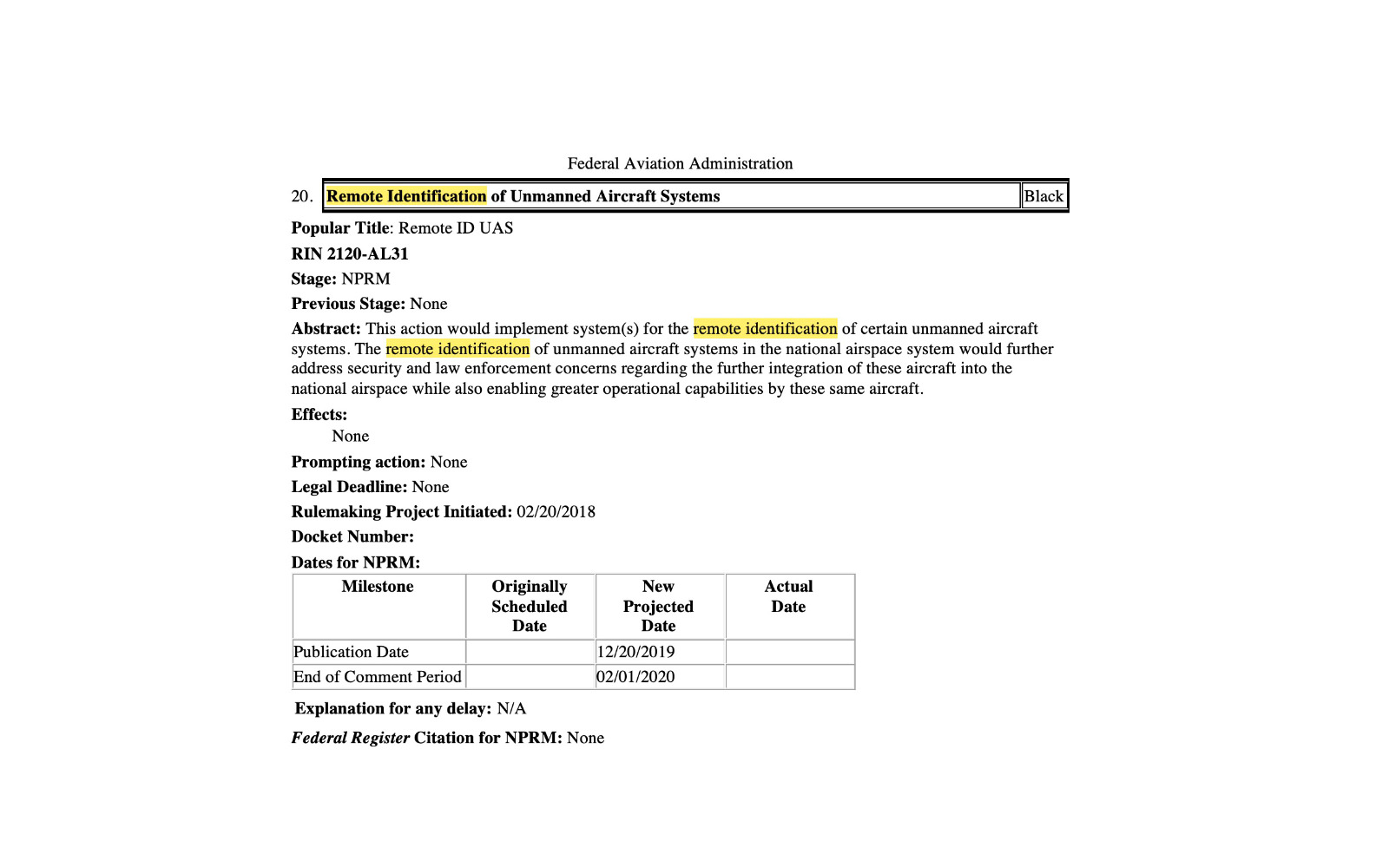 One of the main hurdles preventing commercial drone applications from taking off in the US is Remote Identification of Unmanned Aircraft Systems or drones. Without Remote ID, officials will have no idea who is flying, where, where to, and for what purpose, and thus the FAA will keep their foot on the brake when it comes to allowing commercial drone services. The process of making Remote ID a reality has yet been delayed again by another three months as shown in this significant rulemaking report from August from the US Department of Transportation (USDOT).

The previous time, Remote ID got delayed was back in March. See here for details on that.

In the report from the USDOT it says:

This action would implement system(s) for the remote identification of certain unmanned aircraft systems. The remote identification of unmanned aircraft systems in the national airspace system would further address security and law enforcement concerns regarding the further integration of these aircraft into the national airspace while also enabling greater operational capabilities by these same aircraft.

As you can see, the Publication Date has been delayed until December 20, 2019, and the End of Comment Period has been pushed back until February 1, 2020. Keep in mind that these are “New Projected Dates,” i.e., that might be pushed back even further. Finger crossed that that will not happen…

Brian Wynne, president and CEO of the Association for Unmanned Vehicle Systems International (AUVSI), issued the following statement regarding the US Department of Transportation’s update on significant rulemakings report and the delay of the Notice of Proposed Rulemaking for “Remote Identification of Unmanned Aircraft Systems (UAS)”:

It’s disappointing the rulemaking for remote identification has been delayed again. The need for remote identification cannot be overstated, as the advancement of the UAS industry depends on identifying and tracking UAS flying in the airspace. Remote ID is necessary for enabling advanced and expanded operations such as flights over people and beyond line of sight, which will provide significant benefits throughout our economy and society. Most importantly, remote ID is critical for ensuring airspace safety by helping law enforcement identify and distinguish authorized UAS from those that may pose a security threat. We urge the FAA to move as quickly as possible with rulemaking for remote identification to keep the skies safe for all aircraft — both manned and unmanned.

What do you think about Remote ID for drones? Let us know in the comments below.