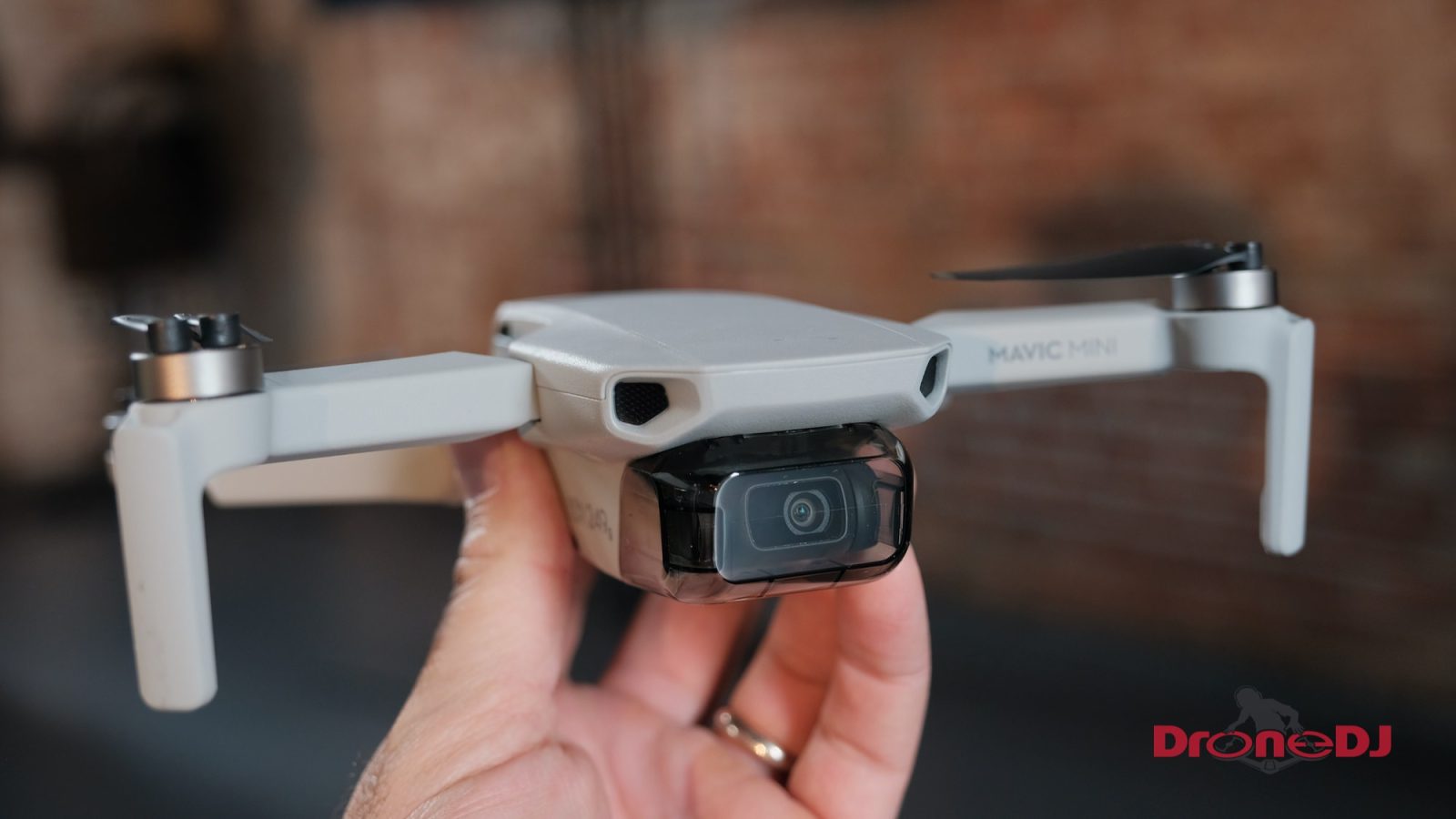 The new Ultra-Light DJI Mavic Mini (from DJI or Amazon) is officially introduced by the world’s largest drone marker this morning. And it weighs only 249 grams! And that is with the micro-SD card included! You can preorder the drone starting right now. It’s $399 for the Standard Version and $499 for the Fly More Combo.

It feels like we’ve known this drone a long time already with all the photos that were leaked over the last week or so. Anyway, we have a lot of information to go over, so let’s get started.

Last Monday, I finally had the chance to hold (and fly) the new Ultra-Light DJI Mavic Mini in my own hands. After having seen so many pictures of this new tiny Ultra-Light drone, I was curious to find out what it would actually feel like. And now having done so, I can say that the size and weight of this drone is indeed its main feature. You can feel it everywhere. The prop blades are very small and flexible. The arms of the drone are super lightweight. The motors are small. And the entire drone is about the size of a smartphone, albeit slightly higher.

If there ever was a DJI drone that you can literally take anywhere and fly almost everywhere, it would be the new DJI Mavic Mini. You will have no excuse to ever leave this drone behind, as you can always find a place in your backpack or your pocket to take it along for the ride.

A DJI employee told me that the battery itself weighs 100 grams, so there were only 149 grams left to build the entire drone including the gimbal, camera, and micro SD card. Somehow, DJI pulled it off.

When you lift this drone, it feels lightweight (and it says so on the side). It is indeed an ultra-light drone weighing only 249 grams. And that is the main feature of this unmanned aircraft, as it allows you to not have to register the DJI Mavic Mini with the Federal Aviation Administration (FAA) if you fly it recreationally. Pilots who use the Mavic Mini commercially will still need to register it.

Outside of the US, for instance in Canada and the UK, it will be much easier to fly this drone as well. Although, as DJI points out, if you take this drone abroad, please make sure you check with the local rules and regulations so you know where you are allowed to fly your unmanned aircraft.

Overall, I would say that DJI made a great lightweight drone without making it feel fragile or flimsy. The Ultra-Light DJI Mavic Mini still looks, feels, and flies like a real Mavic.

This is what Roger Luo, president of DJI, had to say about this latest Mavic in the lineup:

To design a drone as lightweight, compact, yet capable as Mavic Mini was one of the most challenging projects we’ve ever tackled at DJI. Distilling top-of-the-line features into a palm-of-your-hand drone is the culmination of years of work, and we are ecstatic to bring a new class of drone to the DJI lineup. Mavic Mini’s long flight time, ultra-lightweight, and high-quality camera makes it DJI’s everyday drone — and most importantly, it’s easy to fly, no matter your experience level with drones.

Let’s take a closer look at the design of the DJI Mavic Mini. I say function over form as it’s obvious that everything in the design of this aircraft was aimed at reducing weight.

However, it still is undeniably a DJI Mavic drone, as it shares many of the recognizable features from the Mavic lineup. For instance, the arms fold in the exact same way as you’re used to with the DJI Mavic Pro and the DJI Mavic 2 series. The two black openings at the front of the aircraft are familiar. They look like obstacle avoidance sensors, but unfortunately they’re not, as DJI had to leave many features out in order to get the weight below 250 grams. But the overall shape and form factor resemble a DJI Mavic drone for sure.

At the front of the drone, you see a three-axis gimbal and camera. When you turn the aircraft over and look at the bottom, you see four LED battery status indicator lights, an on/off button, and three ventilation slots. Also, on the sides of the drone, there are different air slots for ventilation, as cooling always seems to be an issue when you have such tightly packaged aircraft.

One difference with the DJI Mavic Mini versus the other larger Mavic drones is the way the battery mounts. Instead of mounting it on top of the aircraft with the Mavic Mini, you have to open up a hatch on the back and slide the battery in. 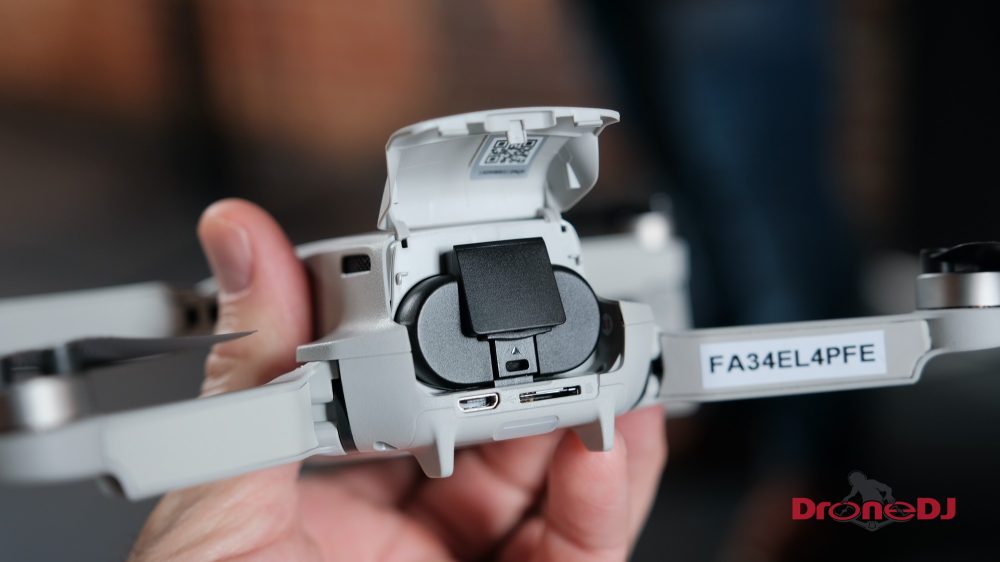 Like I said earlier, the plastic housing of the aircraft feels much lighter than what we’re used to compared to the DJI Mavic 2. That drone feels really solid and much heavier. The Mavic Mini feels really lightweight, however, without feeling fragile. Testing and flying will tell us how sturdy this drone is in real life.

The best drone that you have is the one that is with you. And even though the DJI Mavic Mini is small and features a tiny (1/2.3-inch) sensor, there really is no need to leave this drone behind. Especially when you consider that most photos and videos are watched on social media and on smartphones and tablets, you really don’t need super-high resolutions.

The DJI Mavic Mini shoots 12 MP photos and delivers three-axis, gimbal-stabilized 2.7K video footage at 30 frames per second, or 1080p at 60 frames per second. This should be more than enough quality for the typical recreational drone pilot DJI is aiming for with the Mavic Mini.

Features of the Mavic Mini

Let’s take a closer look at the features of this drone. The main feature is its sub-250-gram weight, which we discussed earlier.

And as I said, you will not find obstacle avoidance on the Mavic Mini, as there simply is no space or weight allowance for such advanced features. The tiny drone, however, does have sensors at the bottom that will help you fly it easily indoors and allow you to precision land the aircraft.

The Mavic Mini also has a GPS receiver to make sure that you get a very stable and smooth flight. The GPS receiver functionality also allows you to bring the drone back home in case you need to. Or when the battery runs low, the drone will automatically return home.

When it comes to flying this drone, the DJI Mavic Mini actually has one of the longest flight times of the entire DJI drone lineup. The Chinese drone maker claims that this drone will fly for 30 minutes straight. Now, of course in real life, this will probably be slightly less. But even if you fly 25 minutes with the Mini, that would be really impressive. When the first leaks surfaced, many readers were concerned that a drone this small might only fly for about 13 to 15 minutes max.

Safety is something that DJI values very highly, and it’s also one of the main features on the DJI Mavic Mini. Of course, it is light and thus inherently safer, but it also has geofencing to make sure that you don’t accidentally fly into restricted areas or close to sensitive facilities such as prisons or airports. Btw, in case you’re wondering, the Ultra-Light DJI Mavic Mini will show up on DJI’s Aeroscope remote identification system to help authorities identify your drone. Furthermore, it has built-in altitude limits to prevent you from flying too high. 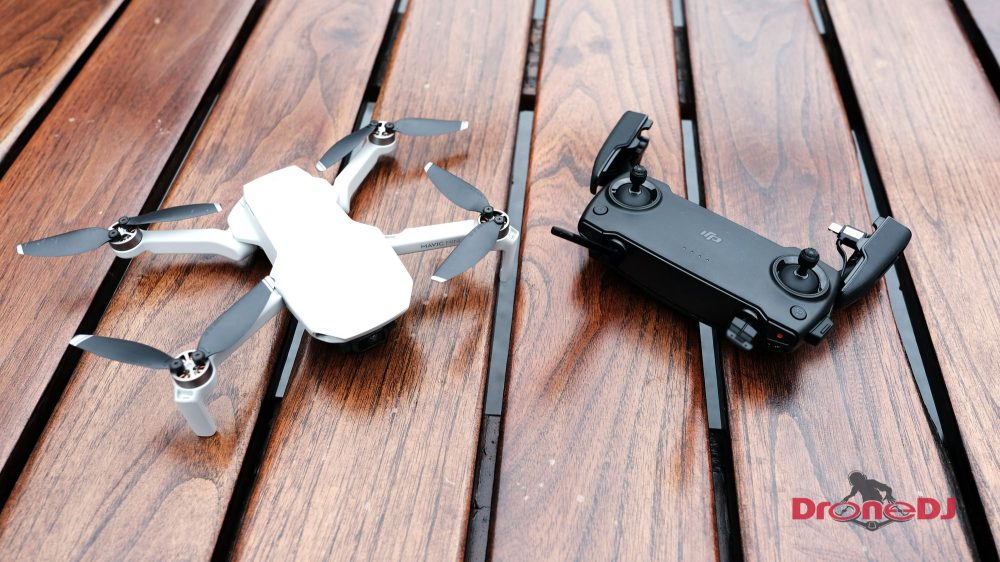 The DJI Mavic mini comes with a remote controller that looks and feels very similar to the controller we all know from the Mavic 2 series. However, this one does not include a screen and has fewer buttons. The controller uses a Wi-Fi connection or transmission signal, and delivers an HD live feed for up to 2.5 miles of range.

The DJI Mavic Mini uses a different app to fly the aircraft. Instead of using DJI Go 4, it uses a new DJI Fly app that is uniquely designed for this drone. The new app has fewer bells and whistles and is a lot less cluttered than the DJI Go 4 app. It makes navigating much easier and also less distracting for a beginner drone pilot.

You can fly the drone in the standard position (P), which is basically your normal operation. However, in the menu, you can also activate the Sport mode (S) or a Cinesmooth mode (C) that will allow you to create smoother footage.

Furthermore, the DJI Mavic Mini and the DJI Fly app offer you a number of QuickShots. You have the Rocket, the Circle, the Dronie, and the Helix. These are all QuickShots that people who are used to flying DJI drones will already know and recognize. However, I don’t remember seeing the Panorama mode in the app, which would be really disappointing. 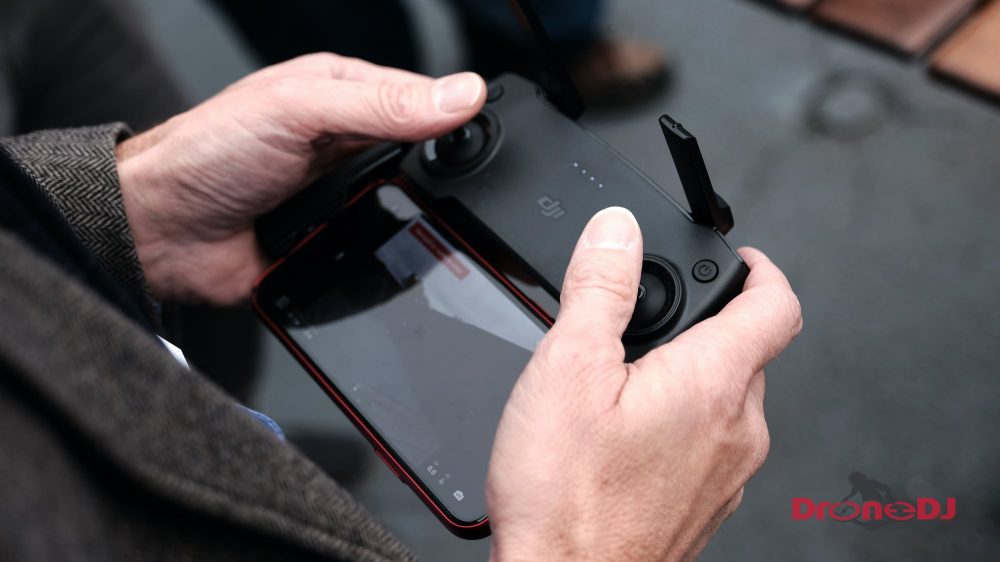 Specs of the DJI Mavic Mini

At the time of writing this article, the spec sheet for the DJI Mavic Mini had not yet been released. As soon as the drone appears on the DJI website, we will be sure to include the specs here.

You will be able to pre-order the DJI Mavic Mini starting today at the official DJI online store and other flagship stores and authorized retailers and partners. DroneNerds should have them in stock, and they can ship them out quickly to be sure to check in with them.

The DJI Mavic mini comes in two different versions. The Standard version includes the Mavic Mini, remote controller, one battery, extra propellers, and all necessary tools and wires for $399 USD. The Mavic Mini Fly More Combo includes all of the components from the standard version with the addition of the 360-degree Propeller Cage, Two-Way charging Hub, three batteries in total, three sets of extra propellers, and a carrying case for the price of $499 USD. You can add DJI Care Refresh for an additional $39 USD.

Shipping will start on November 11.

What do you think of the DJI Mavic Mini? Is it everything you hoped for? Will you be getting one? Let us know in the comments below.