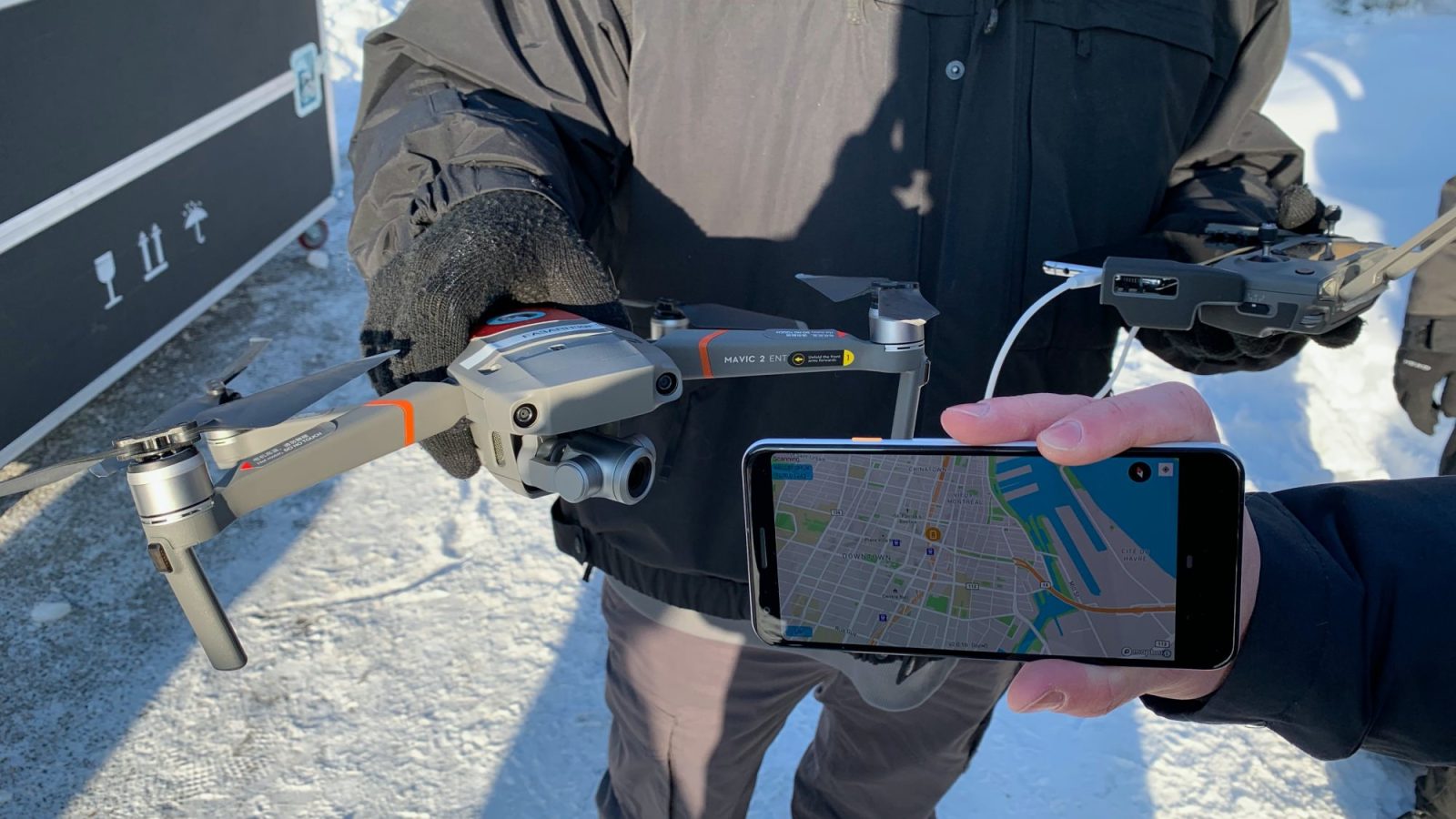 DJI announced today that the Chinese drone maker has been working on a new drone-to-phone Remote ID solution that uses WiFi. The new app was demonstrated with a DJI Mavic Air (DJI, Amazon) and a DJI Mavic 2 Enterprise drone at the International Civil Aviation Organization’s third annual Drone Enable conference in Montreal. In their statement, DJI says that with this simple app “anyone within radio range of the drone can receive that signal and learn the location, altitude, speed and direction of the drone, as well as an identification number for the drone and the location of the pilot.” the new drone-to-phone Remote ID app and firmware updates from DJI are not yet available for public use as this was merely a demonstration. The company is waiting for further direction from aviation regulators and final publication of the ASTM International standard.

DJI, the world’s leader in civilian drones and aerial imaging technology, today demonstrated a direct drone-to-phone, Wi-Fi based solution to remotely identify airborne drones, pioneering an easy way for anyone with a smartphone to monitor nearby drones for enhanced safety, security and peace of mind.

DJI’s remote identification solution, developed in collaboration with industry stakeholders and regulators, broadcasts information from drones directly to off-the-shelf mobile phones using existing Wi-Fi protocols. Using a simple app, anyone within radio range of the drone can receive that signal and learn the location, altitude, speed and direction of the drone, as well as an identification number for the drone and the location of the pilot.

“Remote ID functions as an electronic license plate for drones, allowing anyone who is curious about a drone in the sky to learn more about what it’s doing,” said Brendan Schulman, DJI Vice President of Policy & Legal Affairs. “Around the world, aviation authorities have said remote ID is the key to allowing more complex drone use, and to solving concerns about safety and security. DJI’s direct drone-to-phone remote ID shows we’re committed to providing a solution in a way that is instantly usable worldwide without any additional infrastructure.”

“Our direct drone-to-phone solution is an easy and elegant solution for drone pilots. They will be able to comply with Remote ID expectations simply by updating the software on many drones already in widespread use, without any extra cost or equipment,” said Javier Caina, DJI Director of Technical Standards. “In contrast, remote ID solutions that require pilots to add telecommunications equipment, subscribe to an ID service provider, connect to a cell tower or buy a data plan for their drone will create new costs and barriers for beneficial drone operations. DJI’s direct drone-to-phone solution uses the latest technological advances to make remote ID compliance as easy and inexpensive as possible.”

Aviation regulators in many countries are moving to require remote ID systems for drones as a solution to concerns about drone safety and security. The U.S. Federal Aviation Administration (FAA) has said it will release a mandatory remote ID proposal by the end of this year. The rulemaking process will take more than a year to complete, but an FAA industry committee has urged manufacturers to develop voluntary remote ID systems in the interim. The European Union Aviation Safety Agency (EASA) will impose remote ID requirements in July 2020. The app and the associated drone firmware updates used for DJI’s demonstration this week are not yet available for public use, pending further direction from aviation regulators and final publication of the ASTM International standard. 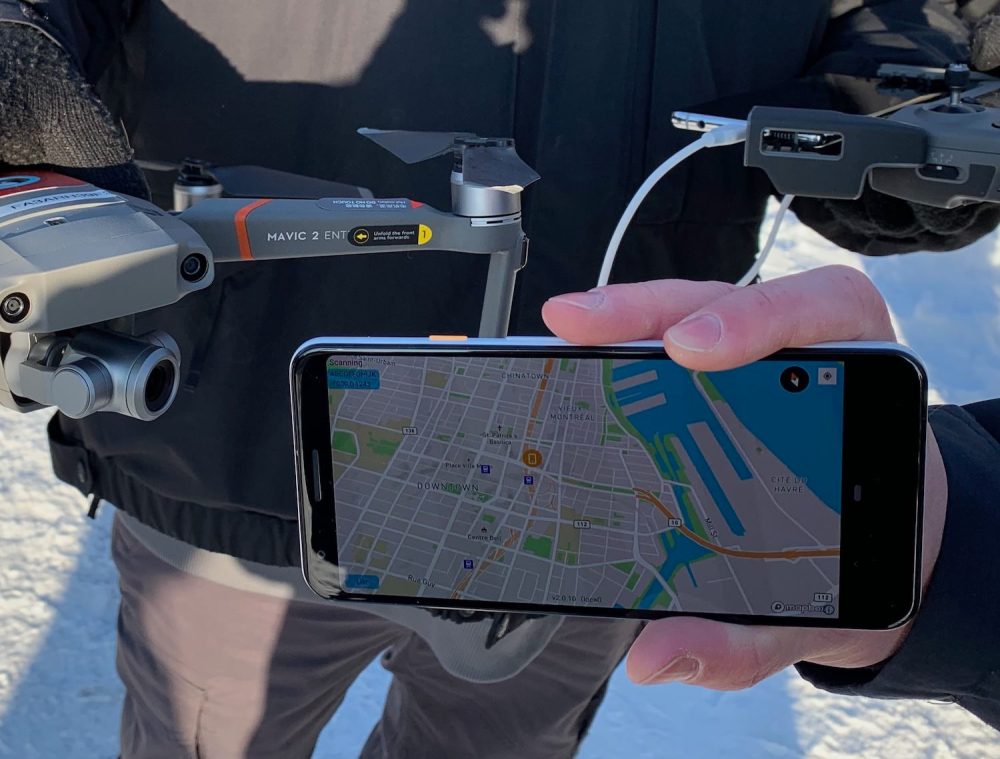 “As more drones take to the skies every day, remote ID addresses the public’s interest in understanding what’s happening in the airspace,” said Christian Struwe, DJI Policy Director, Europe. “DJI’s drone-to-phone implementation helps accomplish that by allowing drone pilots to broadcast a simple description of their flights, so anyone viewing the smartphone app can understand that they are inspecting a roof, surveying a construction site, or performing another beneficial task with a drone.”

DJI’s system was built to conform to the forthcoming ASTM International standard for broadcast drone remote ID, developed over a period of 18 months by a broad group of industry and government stakeholders. The solution uses the Wi-Fi Aware protocol for mobile phones, which allows the phones to receive and use the Wi-Fi signals directly from the drones without having to complete a two-way connection. Because it does not need to connect to a Wi-Fi base station, a cellular network or any other external system, it works in rural areas with no telecom service. In DJI’s preliminary testing, the Wi-Fi Aware signals can be received from more than one kilometer away.

“Wi-Fi is the premiere way to connect devices in the modern era, and we are pleased that Wi-Fi Aware from Wi-Fi Alliance® provides a reliable, virtually cost-free solution for drone Remote ID that can be implemented in many drones with just a software update,” said Wi-Fi Alliance, a worldwide network of more than 850 companies. “Wi-Fi Alliance will help facilitate broad industry collaboration on implementation of Wi-Fi Aware as this solution is adopted by manufacturers and policymakers.”

The new direct drone-to-phone solution is an evolution of the broadcast methodology pioneered by DJI AeroScope, the professional remote ID system first introduced in 2017 for airports, prisons, stadiums and other critical locations protected by police departments and other government agencies. AeroScope broadcasts a drone’s location, altitude, speed, direction and identification number, as well as the location of the pilot, using different radio protocols that can be received from miles away by special receivers developed for safety and security authorities who most need it. More information about how AeroScope is currently used to protect the public is available at this link.

What do you think about DJI’s drone-to-phone Remote ID solution? Let us know in the comments below.