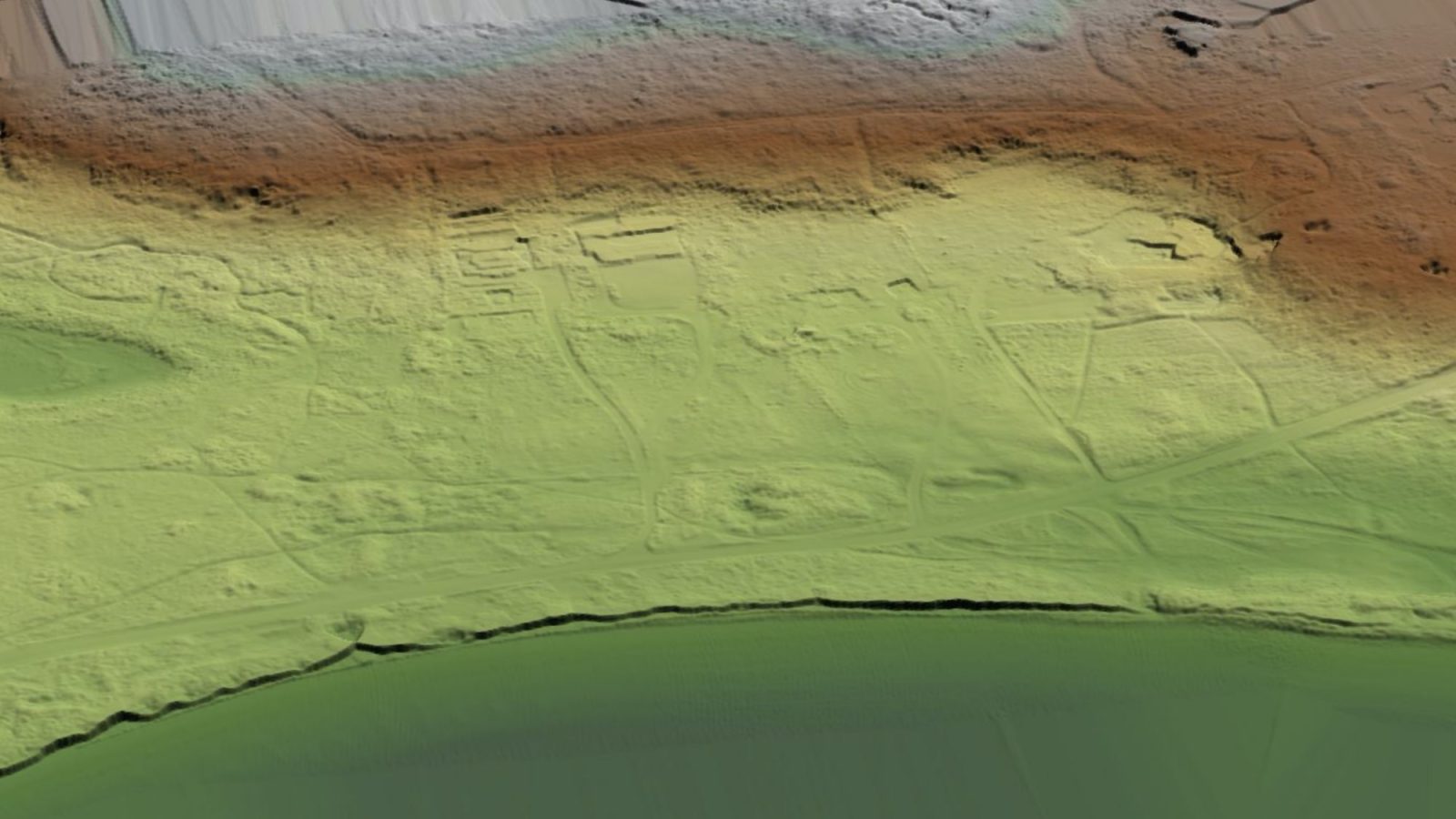 As we have seen in other cases, LiDAR-equipped drones are revealing secrets that have remained invisible to the naked eye. This time a drone with LiDAR reveals a German SS concentration camp from WWII. Old reconnaissance photos from the RAF had shown that during the war a prison camp had been present on Alderney in the Channel Islands, UK, but it took a drone to show where exactly the remains of the camp were located. Be sure to check out this video as well.

The Routescene UAV LiDAR system and software was a key component in a LiDAR drone survey on Alderney in the Channel Islands, UK. The objective was to locate and digitally recreate a German SS concentration camp from World War II.

The LiDAR system features as part of a TV documentary from the Smithsonian channel. The program ‘Adolf Island‘ investigates the overgrown site. During the war and German occupation, a Nazi concentration camp was built on the island. Little is known about the estimated 4,000 laborers who were forced to work and how many may be buried there.

In late 2018, a team from Staffordshire University lead by Caroline Study Colls, Professor of Conflict Archaeology and Genocide Investigation, traveled by boat to the island. They were joined by Routescene customer Michael May and his team at Flythru. They conducted aerial drone surveys as part of the investigation into the camp and potential gravesites. 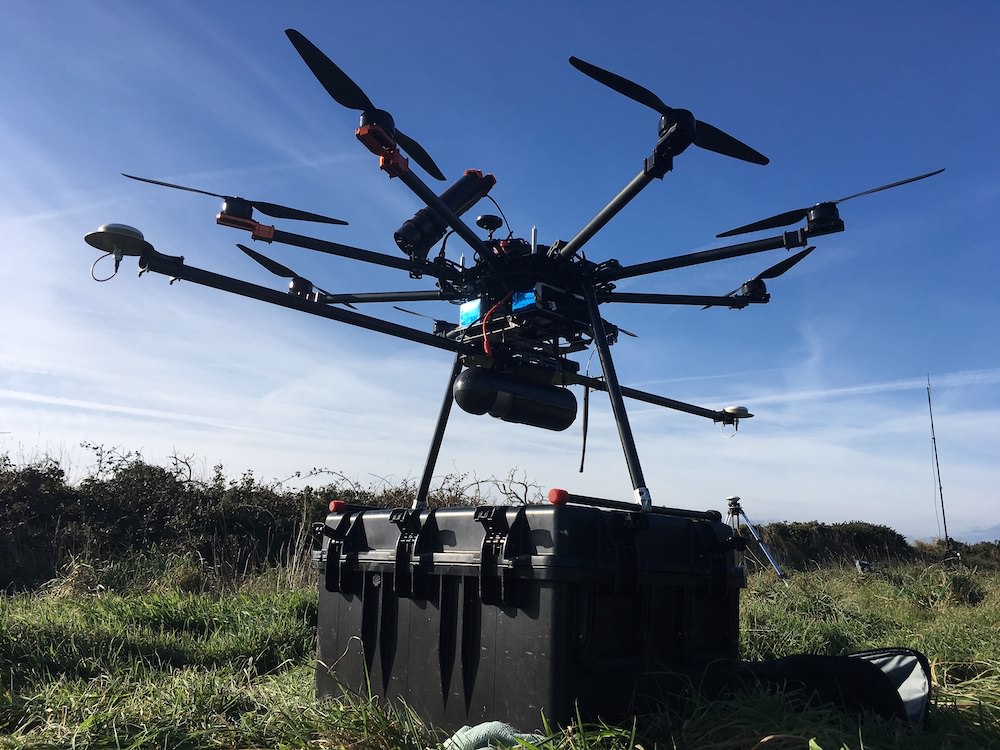 Vegetation penetration is one of the key benefits of UAV LiDAR systems. High-resolution Digital Terrain Models (DTMs) can be created without disturbing the land. With the area now overgrown with thick vegetation, Routescene’s LiDAR system mounted on a drone was selected as the best way of gathering the data needed. This point cloud data could then be used to generate a DTM. This allows the identification of structures of the prison camp that could no longer be seen in the undergrowth. Aerial drones mounted with LiDAR systems are increasingly being used for archaeological, heritage and forensic investigations because of these advantages.

They had an idea of the location of the camp from RAF reconnaissance photography taken during the war along with records from a German War Graves Commission investigation in 1960. The Sylt site was a notorious labor camp built by the SS Longis Common was the location of the known gravesite. They also wanted to see if the LiDAR surveys could show the location of other unknown grave locations.

Uncovering invisible features on the ground

Flythru used Routescene’s UAV LiDAR system which comprises the LidarPod and proprietary software LidarViewer Pro. The LidarPod was developed using a carefully selected array of sensors including the Velodyne HDL-32 LiDAR scanner. It measures the height of the ground surface and other landscape features using laser pulses. With a scan rate of up to 1.4 million points per second with 32 different lasers angled in a 40-degree field of view. This sensor was specifically chosen for its’ ability to penetrate through vegetation. The team was able to gather up to 400 ground hits per square meter, even through the thick ground cover. Once the vegetation is digitally removed this leaves a very accurate bare earth model. This helps uncover ground features that are not visible with the naked eye.

Michael May commented, “It would have taken weeks to survey the area with conventional means, and due to the thick undergrowth it would not have been possible to find the structures with the naked eye. We were able to survey the site in just a couple of 15-minute drone flights.”

The data gathered was processed that evening. Using the LidarViewer Pro software, the team applied a number of filters to process the millions of data points collected in the point cloud. These included the new ‘Bare Earth Tool‘ to remove all non-ground points to leave the bare terrain. This process made the remaining artifacts and structures in the camp clearly visible.

See the trailer for the documentary showing the LiDAR aerial survey.

The information gathered from the LiDAR UAV survey, photogrammetry and Ground Penetrating Radar (GPR) were combined to produce a 3D terrain model. The model revealed traces of grave materials in three significant locations. When overlayed with the survey data gathered by the earlier RAF reconnaissance, Professor Sturdy Colls identified new sites of interest and potentially a mass grave. 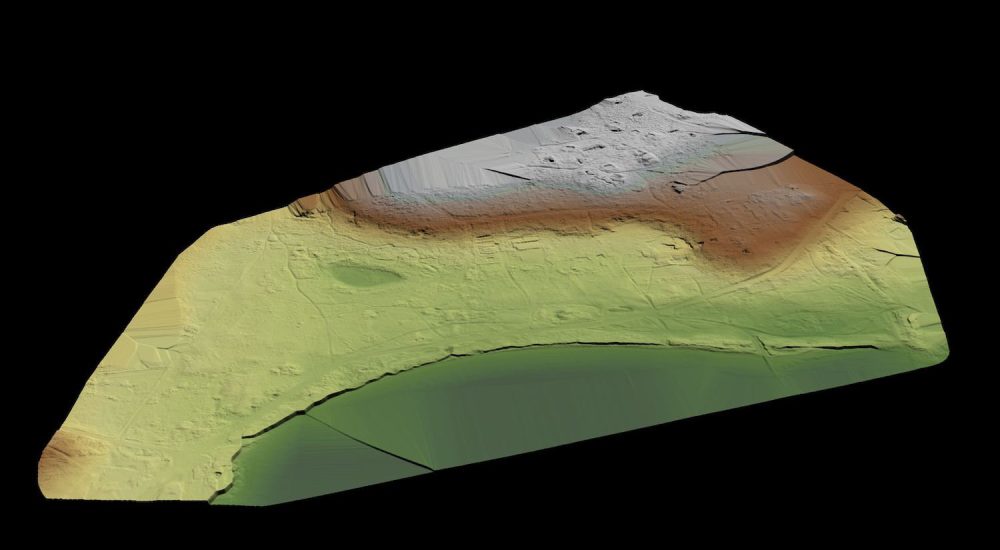 Professor Sturdy Colls commented, “The drone surveys conducted by Flythru using LiDAR and photogrammetry helped us enormously with our research. As the sites were so overgrown, ground-based surveys would have been very difficult. UAV surveys were the obvious choice here. The results have proved incredibly interesting. We found structural elements of the camp that were simply hidden in the dense vegetation and we could not see.”

Gert Riemersma, founder, and CTO of Routescene added, “We are delighted to see the LidarPod and LidarViewer software being used in such important research. LiDAR on UAVs is a quick and effective way of surveying small sites covered in dense vegetation. Being able to analyze and interpret the results on-site whilst all the specialists are on-hand at the location obviously accelerates projects incrementally.”