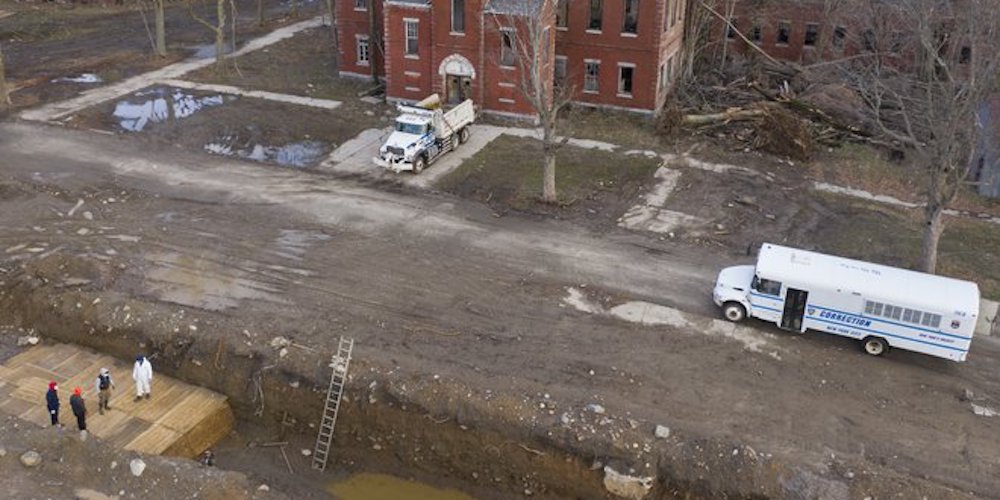 Two weeks ago, the world was stunned by drone photos and videos of mass burials of COVID-19 victims on an island that is part of the Bronx, in New York City. Last week, renowned photographer George Steinmetz set out to capture his own images, but  police seized his drone. And now we have more details of how that went down. “These are humans, and they’re basically being treated like they’re toxic waste, like they’re radioactive,” Steinmetz told Gothamist about the people buried on Hart Island. The island has served as a potter’s field for New York’s unclaimed and anonymous dead since the 19th century.

The Department of Correction, which oversees Hart Island, would not provide an exact number of people buried on the island, but a spokesperson said it was as high as 47 people on a single day.

Hart Island is closed to the public, but it’s less than a mile from City Island in the Bronx. That’s where Steinmetz launched his drone to take photos on April 15. He managed to capture a few shots before plainclothes police emerged from an unmarked van. They confiscated Steinmetz’s $1,500 DJI Mavic 2 Pro drone (but not his memory card), and issued a misdemeanor summons for “avigation.” That’s not a misprint. It’s a violation of a 1948 law that prohibits aircraft from taking off or landing anywhere in New York City that isn’t an airport.

Preparing for burials of what appear to be more COVID-19 victims this morning on Hart Island, New York City. For over 150 years this island with no public access has been used to bury over a million souls who’s bodies were not claimed for private burial. With the morgues of NYC strained, the pace of burials on Hart Island has increased dramatically. I was cited by NYPD while taking this photo, and my drone was confiscated as evidence, for a court date tentatively scheduled for mid-August. #keepthememorycard

Steinmetz is a licensed drone pilot and a well-respected photojournalist. (He’s shot for decades for National Geographic and the New York Times Magazine.) He insists that the flight from City Island to Hart Island was legal. The office of Mayor Bill DeBlasio insists that it is not.

The island, meanwhile, has its own rules. “[W]e have a longstanding policy of not permitting photography of an active burial site from Hart Island. It is disrespectful,” Jason Kersten from the Department of Correction told Gothamist.

This is a legal muddle that may take some time to sort out. But whether or not they were following the law, Steinmetz and other photographers have played a key role in documenting the terrible toll COVID-19 has taken on the city.

“I believe reporting on and images of mass burials anywhere in the US is a newsworthy event, but especially during the pandemic, it is certainly a matter of public concern,” said Mickey Osterreicher, general counsel for the National Press Photographers Association. “The fact that those being buried are the city’s poorest residents only adds to the tragedy.”