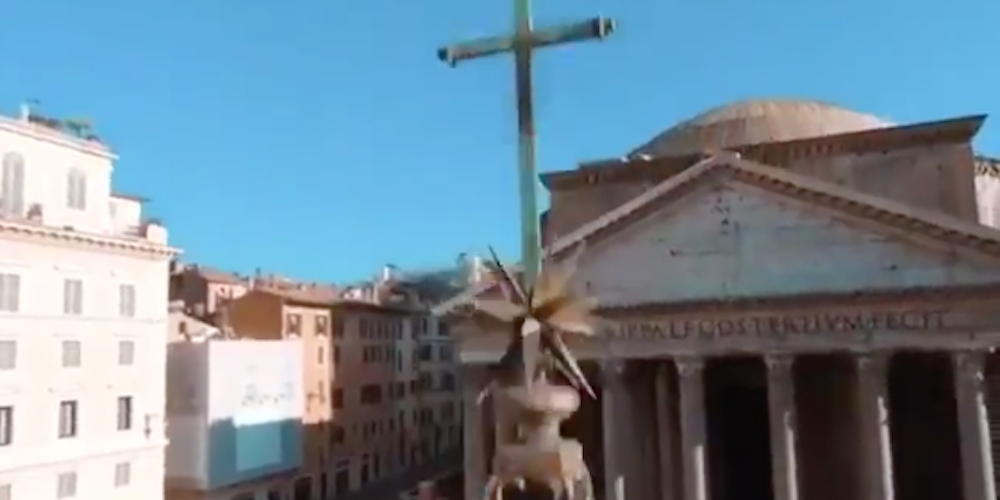 The COVID-19 lock-ins have been an opportunity to see our cities in a new light—devoid of the usual crowds. In some ways, this can be a somber experience, seeing the once-bustling streets and plaza’s deserted. But it also helps focus attention on the design of some of our most impressive cities.

And none are more impressive than Rome. The Eternal City hosts art and architecture stretching back more than two millennia. One of Rome’s greatest historical treasures, the Pantheon, appears as never seen before in this frenetic drone video shot by photographer Dirtyseagullsfpv and posted by the Twitter account Roma Medieval.

Unlike most ancient Roman buildings, which remain as only piles of stone and broken columns, the Pantheon stands fully intact. It’s a very rare example of the majesty of Imperial Roman architecture still visible. Built as a temple to all the gods in AD 125, the building survived because Christians converted it to a church to their one God in 609.

Up close with architecture

The Pantheon consists primarily of a giant rotunda, 142 feet wide, topped by a massive concrete dome. In fact, it held the record as the world’s largest dome for 1,308 years (when the dome of the Florence cathedral beat it). This video provides a rarely seen perspective on the dome as the drone flies straight over the giant structure, which reaches a height of 142 feet. The video is crisp enough to see the mounts in the concrete that originally held bronze tiles. (They were stripped from the dome in the middle ages.)

The drone also zigzags through the mighty, 39-foot high columns of the building’s grand portico. But perhaps the most dizzying part of the video is the flight around and then straight up the length of an ancient Egyptian obelisk that stands in the plaza before the Pantheon.

Roman architecture was all about size and scale—built to gargantuan proportions. A placid photo or video of the Pantheon can only capture so much of these grand dimensions. But a speeding drone provides the vertigo-inducing perspective that conveys just how gigantic the building is.