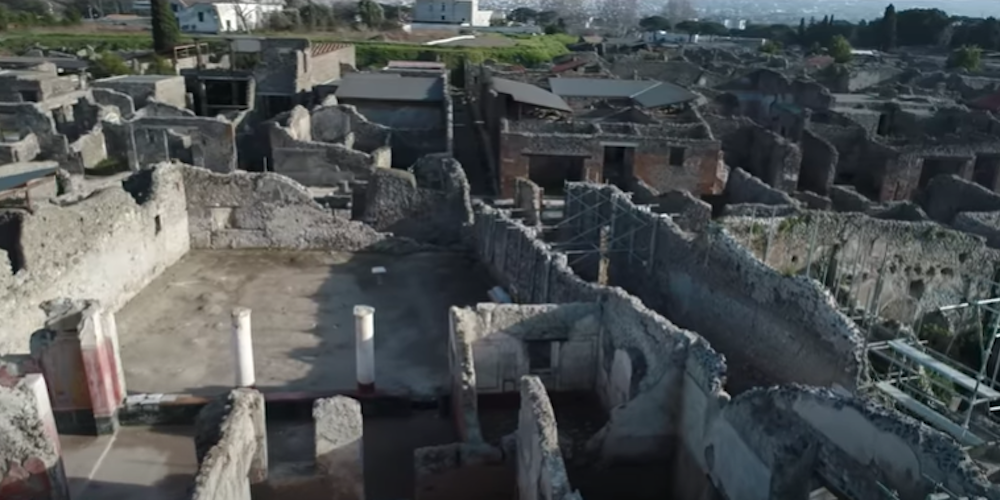 Photography often takes us places we can’t go ourselves. And drone photography takes us even farther than most cameras can. So are we able to get this amazing drone video surveying new excavations in the ancient city of Pompeii.

The drone video provides a wide overview of Regio V of Pompeii, the latest part of the city to be unearthed, over the past two years. It starts off with sweeping vistas over the entire neighborhood. Then it dives down to navigate the ruins of two unique houses, getting close enough that you can see the tiles in floor mosaics.

The archeologists prepared a stunning video tour, narrated in Italian. But English subtitles make the story clear. The tour focuses on the street Vicolo dei Balconi, with houses on either side.

First up is the House with the Garden, a middle-class home named for its signature feature. It’s so well preserved that paleobotanists have been able to determine the types of plants that graced the garden. From this study, they will be able to re-create a living model of what they found. Bright frescos still cling to the stone walls. In one state room, they portray images of love and romance, including Venus with Adonis and Hercules with Omphale.

Not all the finds here were so pleasant, though. The house also featured 11 human bodies. They were mainly women and children seeking refuge from the eruption, likely as the men were trying to find a safe evacuation route. Sadly, the effort failed.

No modest homes in Pompeii

The second home, also a middle-class one, is known as the House of Orion for two mosaics that portray the Greek god. One of them shows how he was killed and then transformed into a constellation in the night sky. In other rooms, the walls are painted to imitate colored Egyptian marble. While probably not members of the elite, the family that owned the home aspired to grandeur and invested heavily in the appearance of the home.

“As is often the case at Pompeii, even these smaller houses feature high-quality paintings,” says the narrator, “and above all yield treasures not only in terms of furnishings but also the most modest of objects relating to everyday life.”

For more Roman architecture, check out this dizzying video of the Pantheon.