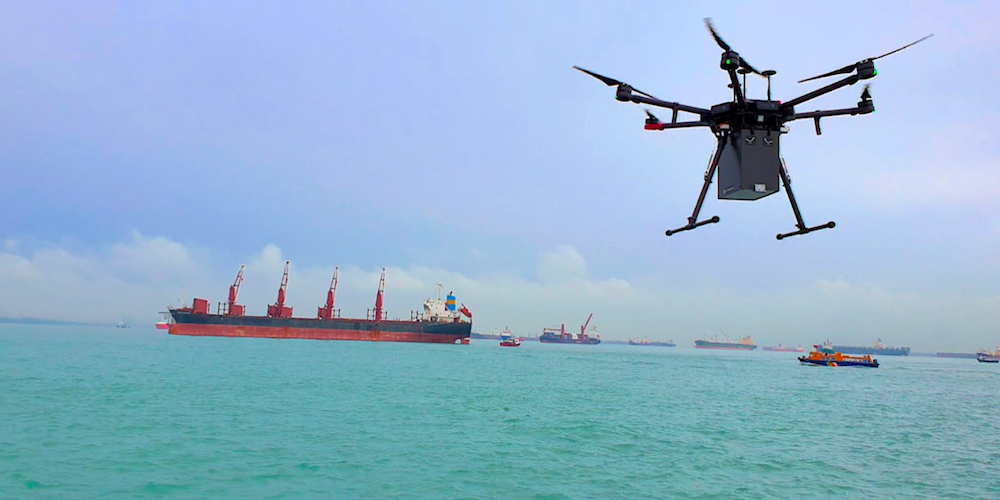 After a very slow start in recent years, the drone delivery business is taking off in 2020. The latest news comes from Singapore, which just got its first drone delivery service. This one is unique because it’s entirely over water.

Singapore is a major port city, with many cargo and tanker ships anchored in the harbor at any time. While the ships pick up and drop off cargos measured by the ton, they sometimes need their own, much-smaller deliveries. In Singapore, it began when a drone carried 2 kilograms (4.4 pounds) of vitamins on a 2.7-kilometer (1.7-mile) jaunt to a ship in the harbor.

The delivery was powered by a very young startup, F-drones, which only launched in March of 2019. Yet it’s already won not only customers but government approval for flights beyond visual line of site, known as BVLOS, which means the drone is allowed to fly farther than the pilot can track it with the naked eye. Instead, the delivery relies on cameras in the drone or on autonomous flight technology. (In the United States, UPS and Wing recently got their BVLOS approval from the FAA.)

F-drones is currently using commercial drones that it bought from another company for its Singapore drone delivery service. (It did not say who its supplier is.) These are limited to delivering 5 kilograms up to five kilometers. But the company is working on its own drones that can go farther. Its first drone, due to start service by the end of the year, will extend the delivery distance to 50 kilometers. But in the second half of 2021, the company aims to launch a much-bigger drone that can carry 100 kilograms for 100 kilometers.

That allows it to reach not only ships but offshore oil platforms, with a meaningful amount of cargo. The goal is to compete with the current delivery system, which relies on small boats or helicopters. F-drones pitches its system as a cheaper and greener alternative to those methods.

F-drones has clearly come a long way in one year. But it has a long way to go. There’s a big difference between buying a small drone and building your own jumbo delivery model. But with the world of drone deliveries opening up so quickly this year, many more dreams seem possible.