Every once in a while, a drone happens to be in the right place at the right time to capture something truly spectacular. Luckily for us, that happened again recently — and the results are truly breathtaking. Just wait until you see this drone whale video.

On June 19, the owner of the San Diego company Gone Whale Watching was out on a run looking for whales. Domenic Biagini noticed that a blue whale began to check out his boat and popped a drone in the air to capture the moment. The resulting video is truly spectacular and wound up being picked up by Fox News.

“We’ve been lucky to see blue whales almost every day for the past week, and in this amazing moment, this giant whale came over to check out our boat,” Fox quotes Biagini as saying. And Biagini’s drone was there to record the magic:

“This was entirely the whale’s choice,” Biagini continued, “as we did not approach this whale at all. In fact, our engine was completely off and we were just drifting there as this amazing moment happened.”

Gone Whale Watching operates out of San Diego and usually offers tours with a small number of people. With COVID-19 restrictions, however, Biagini has been operating only for private charters.

We can be pleased he was operating June 19, given that chance encounter. However, when you check out Biagini’s site, it’s clear that Dominic is one serious drone operator and photographer. The site is packed with some gorgeous images of whales and dolphins, including this winner: 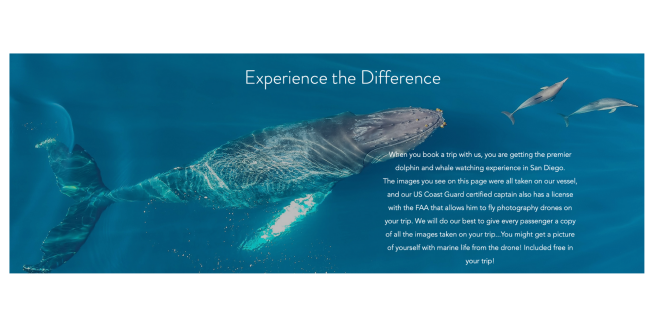 Blue whales are the largest creatures on earth, and according to Wikipedia, the largest animal to have ever existed. How big? Well, they’ve been measured at up to 29.9 meters, or 98 feet in length. It was once abundant in nearly all oceans on the planet, until hunting pushed it to the brink of extinction. In 1967, the International Whaling Commission banned all hunting, though many ignored the ban.

It’s now estimated that 10,000-25,000 blue whales exist around the planet, just a small fraction (around 3-12%) of the numbers that existed just over a century ago.

Biagini, meanwhile, captures their images whenever he can. Known as Captain Dom, he’s a Part 107 certified pilot. And while his website doesn’t reveal what brand of drone he’s flying, we took a closer look at this image, which is from Gone Whale Watching: 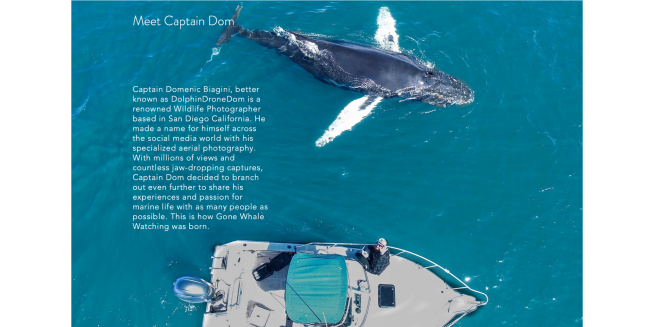 Captain Dom on the deck of his boat. What’s he flying?

Well, a little detective work is in order. Based on the white controller, we’re guessing it’s a DJI product. And based on the shape indented into his open drone case, we’re putting our money on a Phantom. Which model? We’re guessing images like this are coming from a variant of the Phantom 4 line.