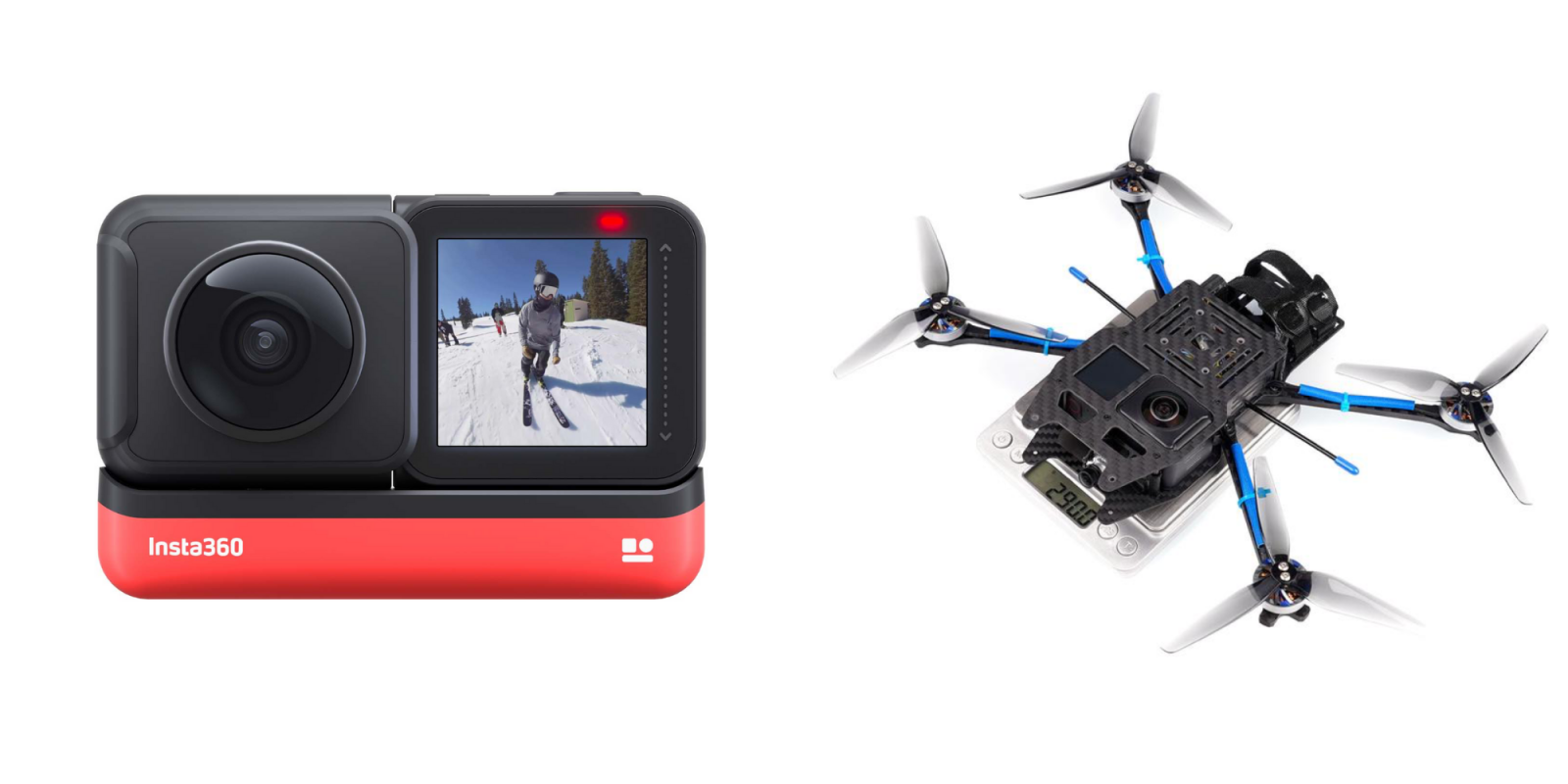 There’s a new Cine-Whoop style drone around. And this one, which utilizes the expertise of drone manufacturer BetaFPV and 360° superstars Insta360, is going to grab some fans. Check out our sneak preview.

There’s no denying the recent trend in the drone world: Increasing interest in Cine-Whoop-styled drones. These are First-Person-View flying machines that generally have wide-angle action cameras mounted on them. The pilot uses FPV goggles to control the flight, while the onboard camera captures 4K internally stabilized video. Some quick processing using software like ReelSteady (on sale now for $69) and you’re golden. So that’s the trend, and it usually involves some degree of mucking around. Maybe you’ll need to order or 3D-print a mounting bracket to get a GoPro or Osmo or Insta360 One R to fit your drone. If it’s more of a Tiny Whoop style drone — and we’ve certainly seen Tiny Cine-Whoops as well — you may wind up taking the casing off your action camera to have a “naked” version, shedding most of the weight in the process. But the above are workarounds more for people who have been flying, and improvising, for some time. Tinkering isn’t for everyone.

That’s where this system comes in.

It’s called the X Knight 360 FPV Quadcopter. When paired with the Insta360 One R, it’s like using the equivalent of an invisible selfie stick that happens to fly. Seriously, between the camera and the mounting position, you simply won’t see the X Knight 360 in sight. It will be, says BetaFPV, like a flying camera:

To create a better FPV filming shooting experience, BETAFPV & Insta360 released the X-Knight 360 FPV Quadcopter. It can capture airborne 360 views and hide the drone entirely from sight. With the latest 360-degree camera techniques, ONE R camera makes creative edits easy, not only for FPV racing, freestyle tricks, pilots can also use it for cinematic and vlogging. Come with the F4 35A AIO FC, matched with the lightweight 2004 3000KV 4S motor and HQ 5025 3-Blade Props, X-Knight 360 FPV drone can fly more smoothly, which makes the camera shoot more HD glorious videos stably in flight.

No surprise here, the frame is made of heavy carbon fiber. (As the owner of three BetaFPV products, the models that I’ve had experience with have been solidly built.) You can see the frame has a slot just waiting to be filled by the Insta360 One R.

Can you guess where it goes?

You’ve got it. Depending on your configuration of the One R, it will either have a lens on one side… or both. With a single side shooting you’ll get 4K, 180° video; with twin lenses, the full and glorious 360°. You can see by how the lens pops out it would be shooting everything except the drone. We’ll say it again: A flying camera.

The X Knight 360° FPV Quadcopter is up on the BetaFPV Site now.

I’ve had the good fortune of reviewing a few Insta360 cameras, and also purchasing one for myself. Honestly think they produce excellent quality products for the money, and most people who review in the 360° world would say the same thing. Insta360 also excels with software that allows you to do some pretty incredible things in post-production.

I don’t own the ONE R — but was certainly drawn to it when the camera came out. There are a ton of reasons why I think this is both a great and flexible camera. I could write down a whole lot of paragraphs about this, bouncing back and forth to Insta360 to double-check my specs. Or I could just offer up this video.

And before we get there…did we say the ONE R has a ton of amazing reviews? It does. But rather than quote several, we’ll peel off this one from DP Review. We have long regarded Digital Photography Review as the most thorough and authoritative of the professional camera sites. And what did it say about this product?

It offers the resolution of a high-end action camera and the versatility and ability to reframe clips after shooting that you can only get from a 360-degree camera.

That resolution is 5.7K. The camera is waterproof to five meters, works with an invisible selfie stick, has very good low-light performance and a ton of other features. We look forward to seeing what people can do with this mounted on that new X Knight Drone.

We’ve be remiss if we didn’t note that Insta360 has a two-day sale on, ending October 14. It’s kind of a match for Amazon Prime Day. Here are the deals — but remember: There’s just one day left.

Insta360 One R: Comes with free selfie stick and battery case. And it’s 15% off for one day.

Insta360 Pro 2: 10% off plus free extra battery and pro series charging station. (This is one of the absolute best 360 cameras out there.)

Seeing Insta360 and BetaFPV get together to create this customized quad is awesome. They’ve done this before with the Beta95X, which can carry either an Insta360 GO or a naked GoPro. We’re happy to see them collaborating again, and hope this becomes a regular thing!