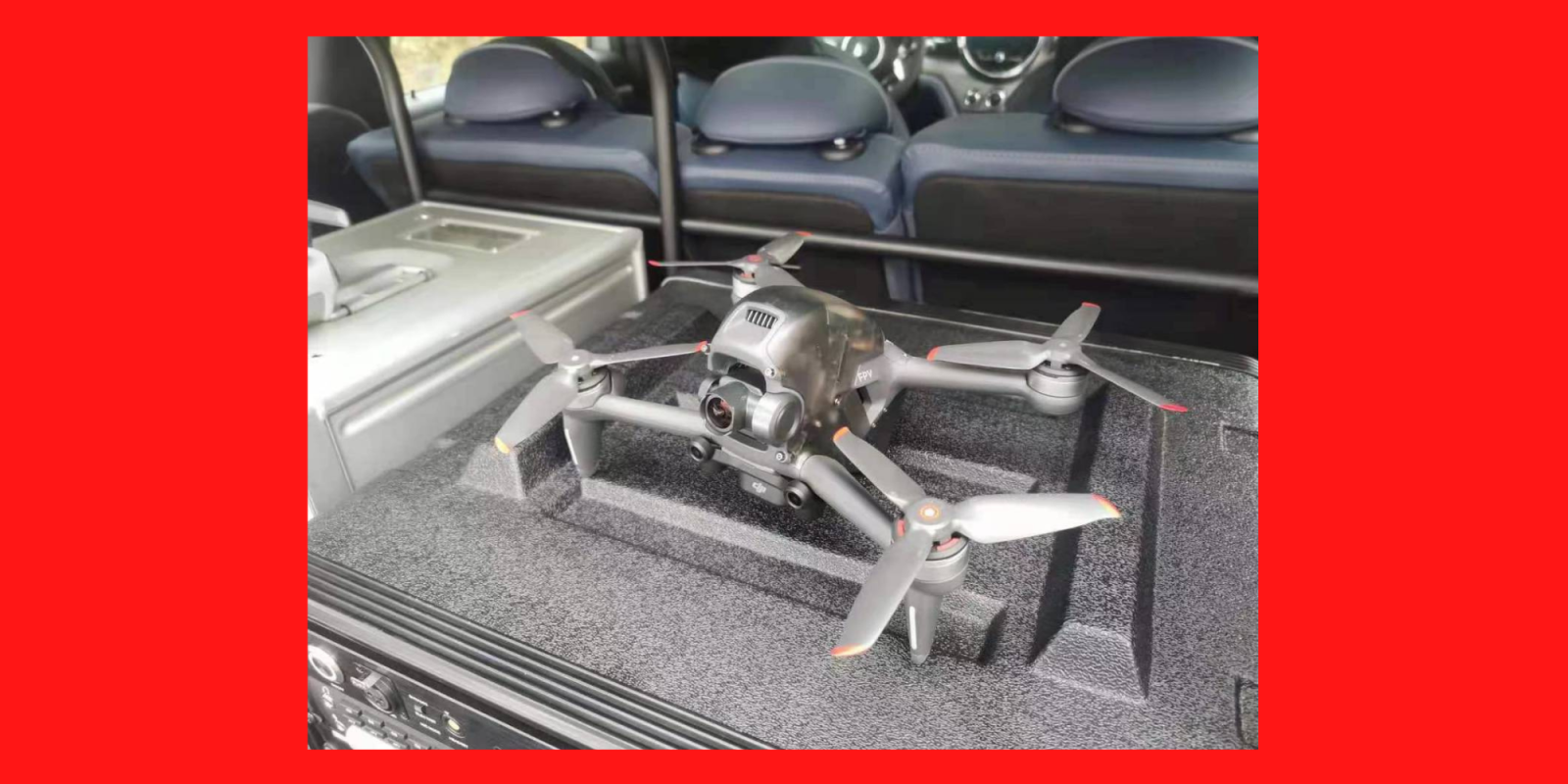 We’ve been waiting for it. And now, sure enough, it’s here: A great pic of the new DJI FPV drone!

You’ve probably seen some of the earlier leaked pix. Remember that first one? It was an earlier prototype, and the images was so pixelated it was pretty tough to figure out anything. Then there was the much better shot with the combo box, which actually told us quite a bit. Like the rest of you, we’ve been eager to see more pictures of the product. And today, we’ve got something to show you.

Another leak of the DJI FPV drone

This one comes to us, no surprise here, from the Twitter account of @OsitaV. This person (and we don’t know gender or anything else about @OsitaLV), got their hands on the best photo yet. And here it is:

Let’s unpack what we can…

First off, we can see the DJI FPV drone has a good-sized chunk of glass on it. The main camera, as we’ve previously speculated, is gimballed. So say goodbye to the days of manually putting your FPV camera into a fixed position before flight. Like any other DJI product, you’ll be able to adjust the gimbal from the radio. This is a major convenience for the pilot, and a feature that will be put to good use in an FPV drone whose primary purpose is capturing high-quality video rather than FPV racing experience.

What’s that directly below the camera?

Yes, those two little circular bits have our attention. What are they? Well, it’s pretty clear there would be two choices here: Obstacle avoidance or a second camera.

Well, that would be pretty interesting and not unlike many current FPV drones. Most pilots take their feed from a small FPV camera, while capturing the video with something like a GoPro or other action camera. It would make sense to have a second viewing option. But why would there be two lenses? Yes, we know it could be for 3D purposes – and we suspect that’s an easy thing to do with DJI’s goggles – but would the company put this on as a feature when it hasn’t really caught on to any great extent in the FPV world? Not impossible, but not our first choice.

This, we believe, is more likely. Remember, DJI wants beginners to be able to fly this product. It doesn’t want the hassle of warranty claims from people who take it straight out of the box and start flying. So it would make sense that some sort of forward obstacle avoidance sensors are included on the drone. Maybe not directly forward, but perhaps – with the drone in flight – on a forward diagonal. This might allow a pilot to avoid the ground as well as other forward obstacles, providing they’re not in the equivalent of Sport mode. (Remember, Sport mode on other DJI products disables the obstacle avoidance – which can’t really be put to work if the drone is moving too fast to respond.)

Plus, those two sensors look very much like a feature we see on the Inspire 2:

Other bits and pieces

We note, as well, what appears to be a pretty substantial heat sink near the top of the unit. It appears to have a scoop to help direct air in. The motors appear to be beefier than what we see on say, the Mavic Air 2, which doesn’t surprise us. Interestingly On the right hand side of the body, just above where it says “FPV” – there appears to be a hole what could well be a vent for that air to exit. On the motor front, it appears that the two front motors are angled slightly forward. We picked this up earlier, on this image – though we cautioned it might be distortion from a wide-angle shot. Can’t say for sure, but we’re betting this is the case.

The only other thing worth noting is the appearance of easily accessible hex bolts in a number of locations. While we don’t expect DJI really wants you tearing this thing apart, there are going to be crashes. And, perhaps, some user-replaceable components. Could this be DJI’s way of making it a little more user-friendly for repairs? We don’t know. But their prominent placement does make us wonder. With many DJI products, it’s not immediately apparent how you take things apart.

We feel like this is getting so close. So let’s have another look at that image:

When will the DJI FPV drone be released?

Wish we knew! We believe it’s too late for December, though DJI is apparently going to release a new Enterprise product on December 15. So that puts us in 2020.

And while we’d love to say “January!” because we want to see this thing so much…we just don’t know.

If history is our guide, however, leaks like this don’t happen until it’s very close to the release date. So we’re going with January or February.

Either way, looks like this will be worth the wait.