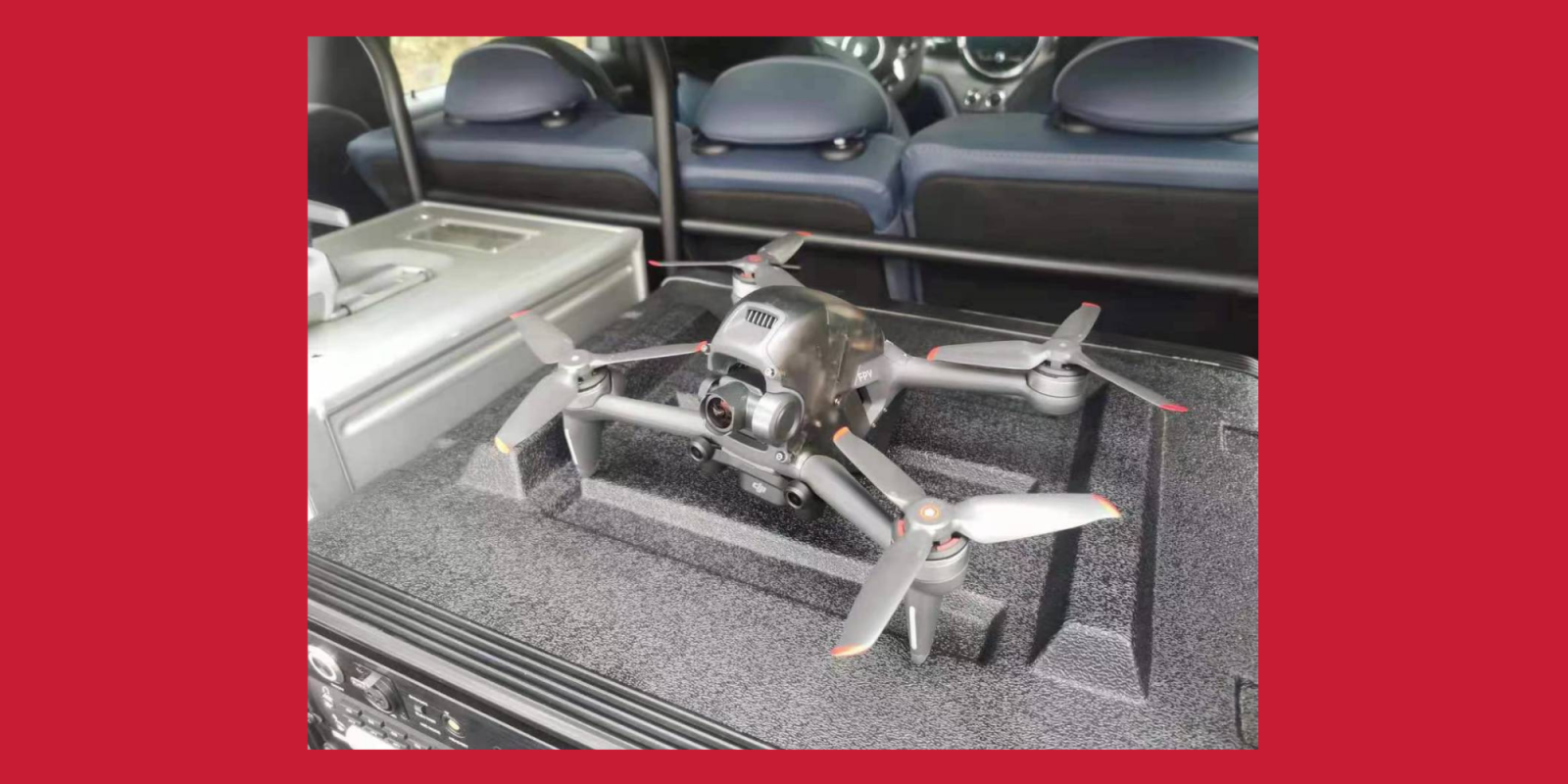 We’re trying to parse everything we can from the latest photo of DJI’s impending FPV drone. And we’ve noted a couple of new things worth reporting.

From the very beginning, we’ve hypothesized that the new DJI FPV drone will be a new type of drone, designed to offer a pain-free flying experience for those who haven’t flown FPV in the past. That means stable flight mode options that will make the device as simple to fly for beginners as any other DJI product is out of the box. We still stand by that view, which we explore in greater detail here. But with each new image leak, more about this aircraft reveals itself.

So let’s see what else we can determine.

A closer look at the gimbal

We had been under the assumption that the gimbal on the FPV unit would be the same as gimbals on other DJI products: A three-axis gimbal. We speculated that there would be a mode allowing you to lock the gimbal, allowing you to experience the horizon tilt that you’d see with other FPV units.

This is actually something DJI has played around with before, with the Fixed Wing mode on the Mavic Pro. That feature was brought in to maximize the experience of original DJI Goggles and to give pilots a racing drone-like experience.

But now, we’ve had a closer look.

Seems pretty clear that the gimbal will only tilt vertically on the new DJI FPV drone. Have a look:

We were scratching our heads on this one: Why would DJI, which is known for its gimbals, not equip this drone with a three-axis version? Why not give people the option, if you could?

We think we have the answer. Three-axis gimbals are too fragile.

Think about this for a second. And think about some other popular DJI drones. Whether it’s the Mini 2, Mavic Air 2, Phantom Four Professional – or anything else we can think of, except for models with removable gimbal/camera combos (like the Inspire 2), every single one of them has that finicky gimbal protector that you need to put on when storing the drone.

And why is that? Because three-axis gimbals are delicate, fragile mechanisms. Exactly the kind of thing you would not want to put on an FPV drone that’s likely to take a few tumbles. No manufacturer wants an avalanche of warranty claims or the bad press that comes with a poorly designed feature.

Yes, a single-axis gimbal will take away some cinematic options. But it’s far less likely to break – so this makes perfect sense.

We saw this feature when the image surfaced, but neglected to mention it. The propellors are clearly a low-noise model. The tips are very similar to the existing low-noise props already sold by DJI:

As you can see from the photo – the rear legs don’t have supporting columns. Instead, the drone sits on what appears to be part of its body. You can see this a little more clearly in the image on the box:

We’re guessing that could be the battery.

An exposed battery on the bottom of the drone? Yes. This is a design we’ve seen before, most notably on the Skydio 2. We also note, if you look at the above image of the drone in the box, that there’s no apparent place to insert a battery on the top. The semi-translucent canopy is no doubt removable, but based on what we see here we don’t think that’s where the battery goes.

What’s more, we’re anticipating that DJI – which has loads of experience with battery optimization – has optimized this drone for extended flight times, at least when compared with standard FPV units. The size of the tail end is too small to accept any substantial battery via a compartment like the Mini 2, so we’re guessing that feature we see on the bottom of the drone, including the tiny legs, is a battery.

Finally, we also note vertical strips running on both of the legs of the front motors. These, we suspect, are LEDs. We’ll go out on a limb and suggest they might even have programmable colors because, you know, flashy FPV.

At least for now. When we know more…so will you.