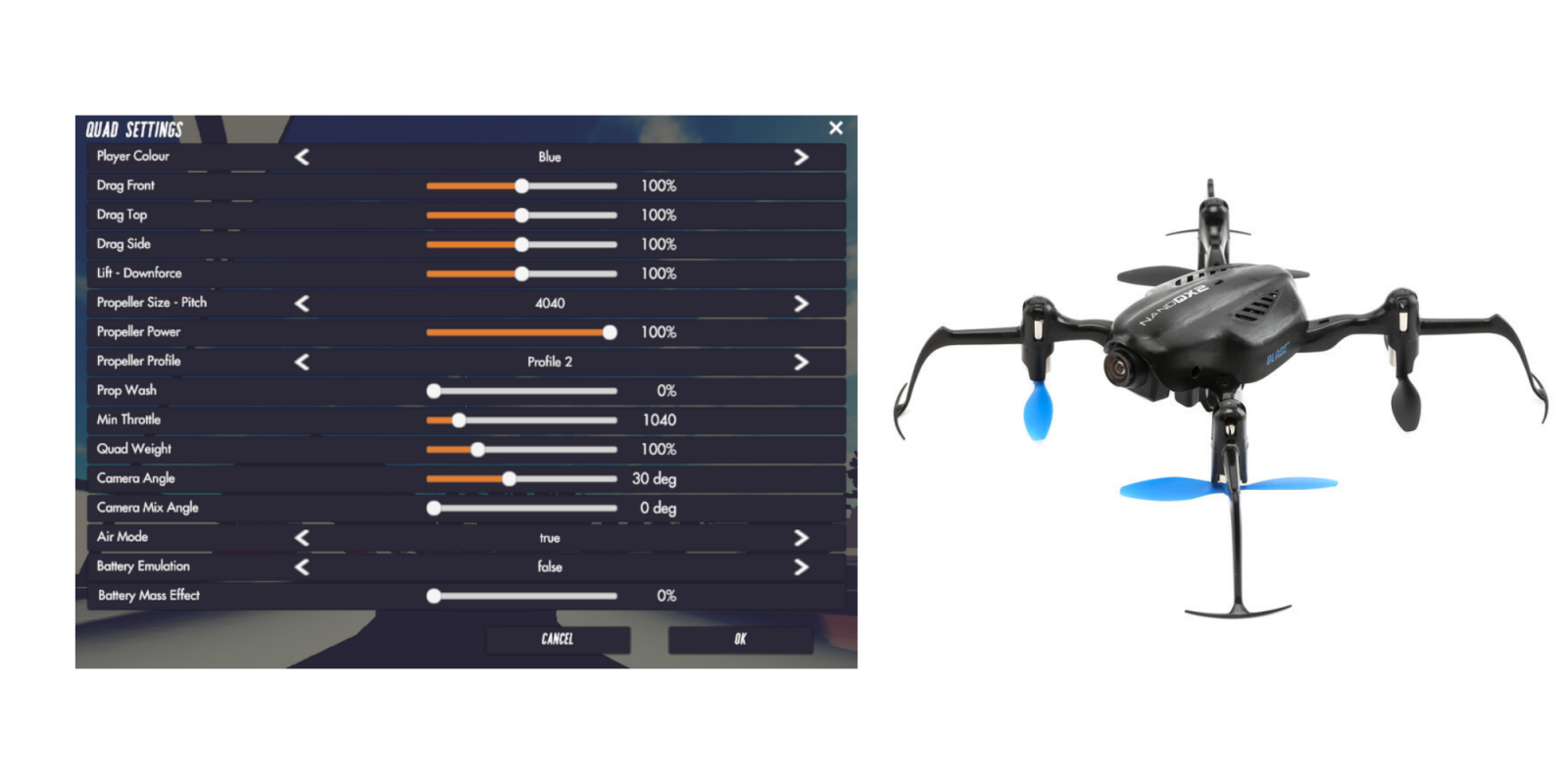 You’ve likely heard that old saying: “Do as I say, not as I do.” Well, it’s very relevant to this story about FPV piloting, simulators, and maximizing your learning curve.

There’s a lesson in this story – and one that I learned the hard way. So if you’re interested in learning how to fly an FPV, hopefully, you can also learn from my mistakes. I’m on the right track now, but it’s taken me some time to get here. So settle back, and I’ll tell you what I did wrong… and what I did right.

Hopefully, it will help you. That’s the point of this post.

My convoluted path to FPV

I’ve nibbled around the edges of FPV for several years now but would not call myself an FPV pilot. My early efforts were focussed indoors (and out) with a couple of Bind and Fly products. I can’t remember which came first, but a lot of my early efforts involved these two products: The Blade Inductrix (a copy of the original Tiny Whoop), and the Blade Nano 2.

Flying indoors and out

These were both really useful tools, and the Blade Inductrix really got a workout. I flew that in the house so often I could actually navigate pretty much the whole home. And yes, it absolutely helped me get a sense of flying FPV. But it was also easy to fly – perhaps too easy. My recollection (it’s been a couple of years now) is that this little drone always self-leveled. You didn’t have to be as vigilant on the sticks as you do with an FPV outdoors. And, let’s face it, there’s a real difference between flying a docile drone indoors and something badass and fast out in the wild.

The Blade Nano was fun but quirky; it started wanting to flip during flight and then wound up back in its box in a closet.

When I got back into it again, it was with a radio upgrade (Taranis X7S) and an Emax Tinyhawk drone. I’d probably been away from trying FPV for about a year at that point, so it took time to get back in the swing of it. But once I got there, the Tiny Hawk was great. It was also capable of flying in Rate mode, which requires more constant stick vigilance and is much closer to the true FPV experience.

I got better, for sure – and took the TinyHawk outside when I could. But I was still worried that if I took out a much faster quad in the field that I’d crash it. And sure, crashing is part of the FPV experience. But I knew I wouldn’t just crash it; I was likely to destroy it.

So, with that psychological barrier, I was kind of stuck. Even flying with the excellent BETAFPV racing kit, an all-in-one good for indoors or out, I felt like I’d hit a wall (which I actually still did, on occasion). But seriously, while I could fly easily from room to room, trying to fly low, fast circuits always seemed to result in a crash. If I flew slowly and sedately, I was fine; anything really ambitious ended in disaster.

After a certain amount of time, the inability to push things to the next level got frustrating. And so I decided to take the advice of two excellent FPV pilots whom I trust: Work on a simulator.

And here’s the start of my mistake

I’d actually purchased a copy of Velociraptor like two years ago. I tried it once or twice, found it frustrating, and forgot about it. But then, a few weeks ago, I finally made the mental decision that 2021 would be the year when I learn to fly FPV, with fast drones, outdoors. I charged up my Taranis and launched Velociraptor.

I loaded up the first course, a series of gates set inside a football stadium. I looked at the advanced settings, which looked really complicated. And so, like many guys, I just ignored that part and pushed on. I revved the throttle gently, pitched forward, and ran straight into the gate. Over and over, I tried…but the simulator was much harder than flying indoors had been, or at least was for me.

Plus – though I didn’t know it then – I was in Horizon mode, where the drone was self-leveling.

I set a goal, based on what I’d heard from a pilot who’d started from scratch, to dedicate 60 hours to the simulator. It sounded like a lot, but I decided to just grit my teeth and dive in.

It took time, hours, but eventually, I was getting through those gates most of the time. But whenever I added some speed? Well, it would all fall apart. I figured this was simply my inexperience and lack of attuned muscle memory. So I kept pushing on. I tried some adjustments on the quad settings. But – and I’m being totally honest here – didn’t really know what I was doing. I mean, obviously, I had some idea what I was doing. But it was mostly guesswork.

So I stumbled along, successfully softening some parameters through a combination of intuition and luck. But the progress still seemed slower than what I’d hoped for. I was up to about 12 hours and feeling like an okay beginner, but I wasn’t progressing at the rate I’d hoped.

And then, just a few days ago, I noticed that I’d been flying in Horizon mode again. I switched that to Rate, and the flying became more difficult in some respects – and easier in others. But I knew that Rate was the way to go if I wanted to be flying, and eventually modestly freestyling, outdoors. I pushed on.

And then – light bulb moment – it hit me: Read the instructions. Watch the tutorials.

YouTube can be anything you want it to be. But when it comes to “How To” videos, it’s an incredible resource. I quickly found the Velociraptor channel and clicked on the first video for learning FPV using that simulator. I committed to starting at the beginning, even though those courses were dead easy, and paying attention to everything in these videos.

Here’s the first one. You can see how simple the course is!

Snorefest, right? Sure. But if you knew nothing about flying FPV, you could hop onto this video and start learning and practicing. What’s great here, too, is that these tutorials jump back and forth between the track and the settings. The narrator explains clearly why you’d want to adjust certain settings to make this easier at the beginning (including flying in Horizon or Angle mode). Before long, I was hopping back in and changing my own settings as I became more comfortable.

Also, by video four, we have moved on to a slightly more challenging track and are flying in Rate mode. And, I’m pleased to say, by video four, I was also flying better than I had been before. Plus, I *finally* had an understanding about what all those complicated settings were about.

Your experience may vary

I’m sure some of you might be saying: “D’uh – yeah. Why didn’t this guy start with the instructions?”

It’s a good question, and I applaud those who have the discipline and workflow to approach things this methodically. It just makes sense. In my own case, I think I just wanted to get on with it; that after such a long period of thinking I wanted to truly learn FPV that once I made the commitment to dive in…I just took the plunge. The time it would take to learn the nitty-gritty felt like unnecessary distractions that would cut into my simulator time.

But those settings are crucial. Building on fundamentals is important. Reading instructions and watching tutorials matters.

As of the writing of this post, I’m up to just over 26 hours on the simulator. I’m what I’d call a competent beginner and now have enough confidence to get out with an observer and try some FPV outdoors. I’m by no means good, and I’m still committed to those 60 hours – even more, if necessary.

But at least now I have a plan for those 60 hours. And that plan, for me, makes sense.

A final tip: Slow and steady

I ran a few laps in race mode last night on a fairly easy course. I didn’t make any errors and felt I’d done things in a reasonable amount of time. So I uploaded my times to the leaderboard.

I came in, if I recall, slot #487. So 486 racers had been faster than me. And you know what? That’s awesome. I’m not doing this to compete with others, but just trying to ensure I have the most solid foundation possible. It was my own personal best, and that’s good enough for me. When you’re learning, control is more important than speed. Speed will come over time, if that’s what you’re after.

Anyway, time to get this story posted – as I’m hoping to sneak in maybe 15 minutes on sim during this shift. Happy flying, and I hope this resonated with at least some of you.