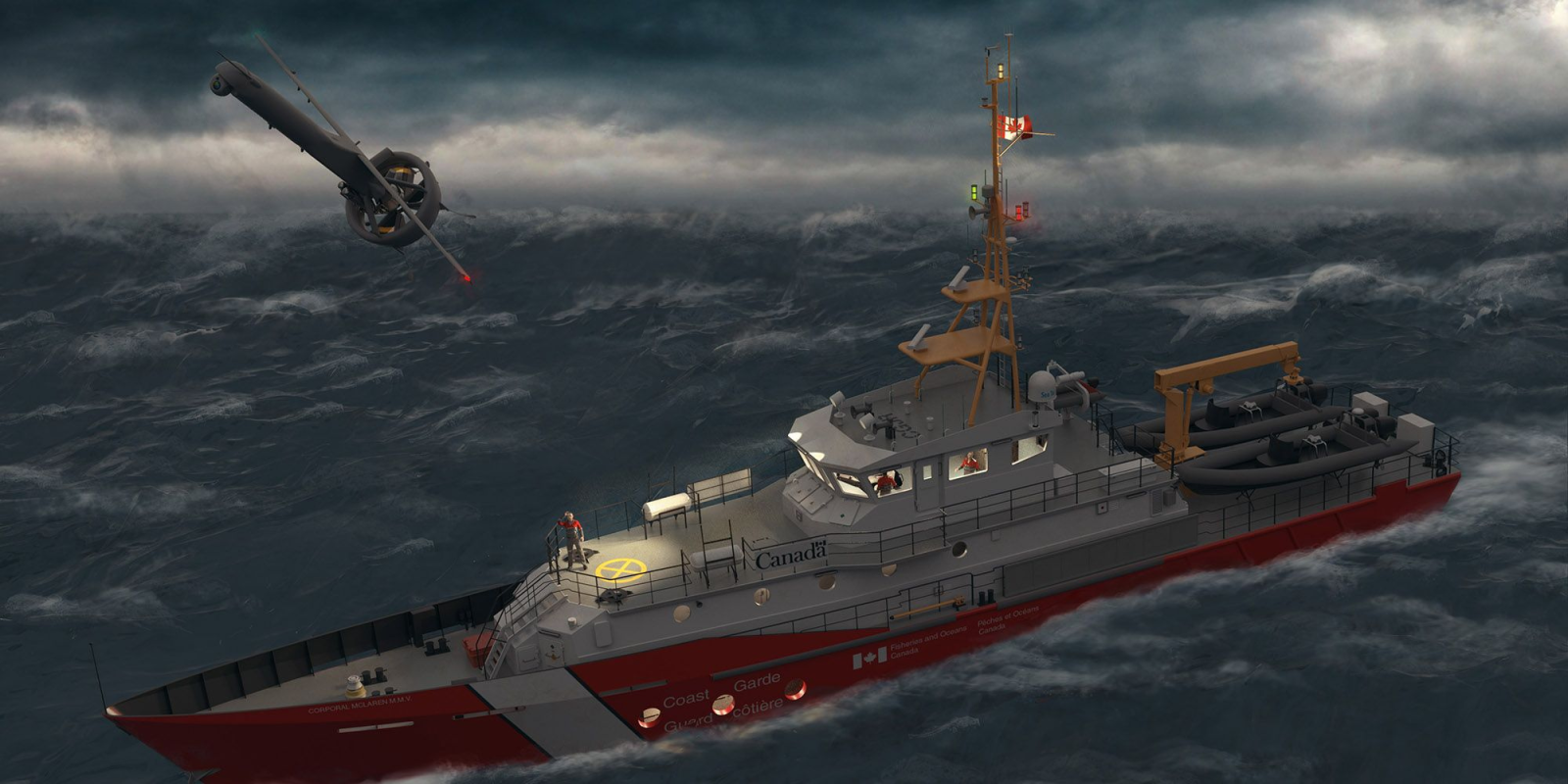 A new surveillance drone will be deployed by the Canadian Coast Guard in trials funded by Defence Research and Development Canada (DRDC). Kongsberg Geospatial has been selected as the firm to oversee the tests, which involve MartinUAV’s innovative V-BAT drone.

Maritime surveillance is tricky business. Ideally, you want a robust, long-range VTOL that easily takeoff from and land on a ship. Factor in that ships are often a moving target, moving with ocean swells, and you’ve got a complex situation. Now, the Canadian Coast Guard will be testing out a new drone – along with a software system from airspace data leaders Kongsberg Geospatial.

The information comes in a news release; let’s check it out.

Kongsberg Geospatial is a leader when it comes to delivering meaningful geospatial data in realtime. That means software that can handle multiple data streams simultaneously, giving the end-user critical data in a flash. Think of a drone carrying multiple sensors on a sensitive mission. All of the information it’s collecting needs to be shuttled back in a format that’s easy to see and understand.

If you’re thinking this is the kind of capabilities that would be useful to the military, you’re correct – though the company does have other clients as well.

During these trials, Kongsberg Geospatial will be using its sensor data management system – MIDAS – on board the Canadian Coast Guard vessels. The software allows everything collected by the drone, including a live video feed, to be seen by those monitoring the mission.

This UAV employs a hugely innovative design. Using a single ducted rotor with vectored thrust, it can take off and land from a small space, yet easily transition to fixed-wing mode for extended flight. Its gasoline-powered 182 cc engine can carry it 130 kilometres, or 70 nautical miles. It’s capable of carrying multiple sensors.

The news release says “The combination of the Martin UAV V-BAT and the Kongsberg MIDAS sensor data management system will allow Coast Guard vessels to significantly expand their surveillance range for search and rescue missions, and for the surveillance of the movement of icebergs, without requiring the use of manned aircraft.”

Kongsberg Geospatial’s MIDAS is derived from technologies created for the NATO Alliance Ground Surveillance project which required the storage and retrieval of vast amounts of intelligence data for Intelligence Analysts. The system directly addresses the problem that the vast majority of UAVs have no standards-compliant capability to process, exploit, and distribute (PED) their sensor data where it is being used. MIDAS provides a fully standards-compliant system that allows intelligence analysts to view, process, and analyze sensor data in near real-time, from where the drone is being operated. MIDAS has packaged these capabilities into a tactical and portable form factor to enables those surveillance capabilities to be deployed as a portable system on board a ship, or in a temporary command post.

The news release also says the Coast Guard will be using the system for Search and Rescue operations, as well as monitoring the movement of icebergs.

UAVs are a useful tool, but they only truly effective if they can collect sensor data that results in actionable intelligence. Our MIDAS system allows users to fully exploit raw sensor data, and derive useful intelligence at the tactical edge where the UAV is being used. In a search and rescue context, that could mean using infrared sensors, or near real-time motion detection to locate a subject when visibility or weather conditions are poor.

Looks like a very useful system. Hopefully, Kongsberg Geospatial will update us after deployment.