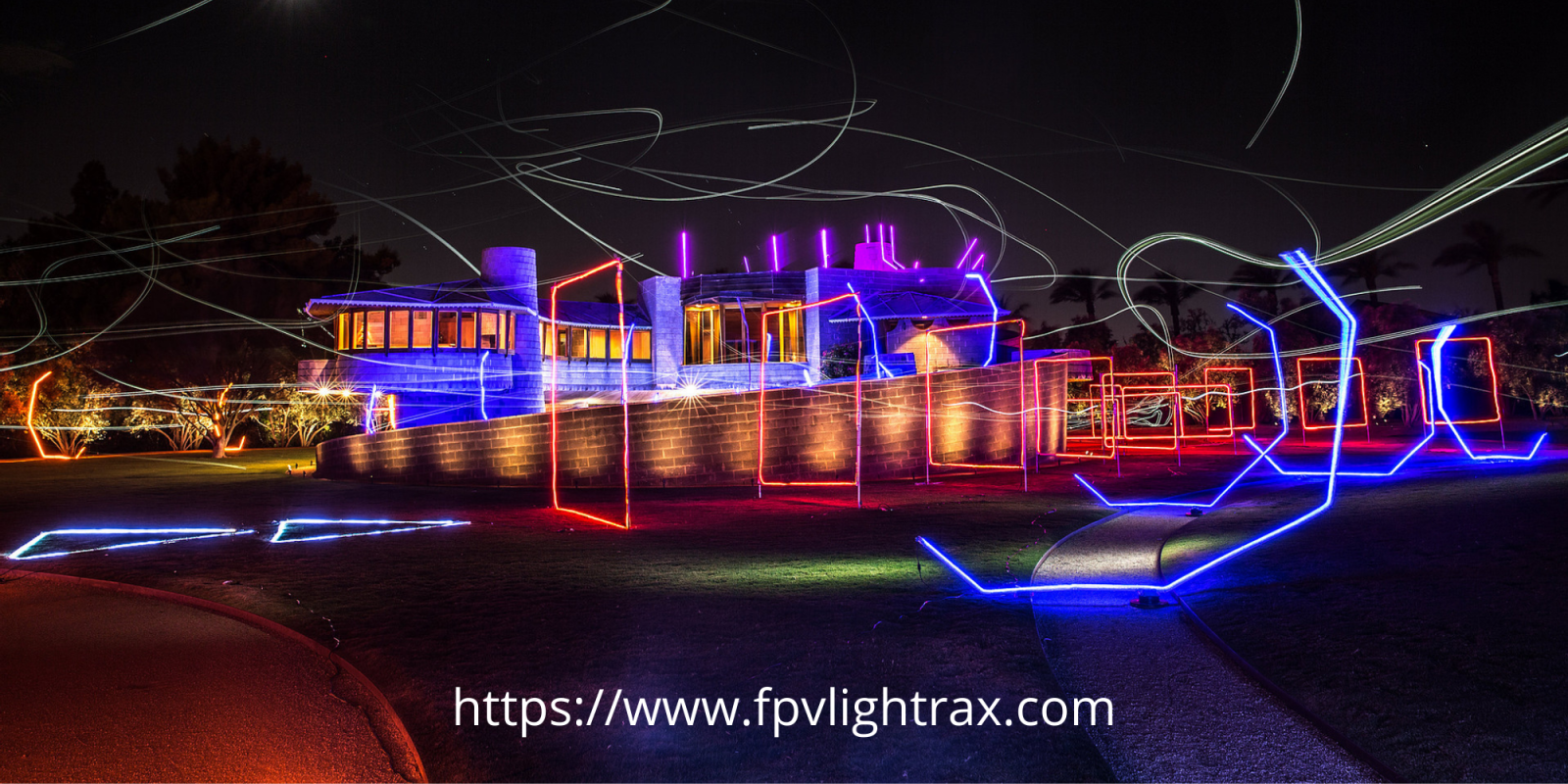 With DJI’s FPV drone now very close to public launch, we thought it would be great to get the opinion of an FPV expert. And David Moquay of FPVlightrax was happy to comply. He’s got some great things to say, so read on.

If you haven’t heard the FPVlightrax name, you’ve undoubtedly seen its work. The company has built quite a name – and a business – by designing and installing colorful, glowing FPV tracks. The company has been building these night tracks since 2015 and is considered a leader in the field. So David has spent a ton of time around FPV and is obviously a pilot.

It’s not often we get to include Lady Gaga in a story about drones, but it’s worth knowing that Moquay is something of a Renaissance Man. In addition to all the cool stuff you’ll find at the FPVlightrax site, David is involved with a ton of other things, including high-end artistic video productions, film and fashion work, some amazing multimedia creations, and more. Seriously, way more. As for Lady Gaga, check out David’s reel from back in 2013:

With that added context, let’s hop back into the world of FPV. Specifically, let’s take a look at the kind of tracks David’s company puts together. Stuff like this:

How did you get started?

I’ve been passionate about all things that fly since a kid and more than 10 years ago, I started strapping small sport cameras to RC airplanes and helicopters with laughable results. Then I came across some of the first videos from Raphael Pirker, aka, Trappy, and of course the rest of Team BlackSheep. I was blown away. My first drones were bashed from kits and parts – super fragile, large, cumbersome and delicate, strictly for aerial photo and videography.

“Then, in November of 2014, a friend pointed out a video called: FPV racing crash session. If I’m not mistaken, that used to be called Star Wars crash session.”

And here it is. Remember, these were the early days and this video was amazing at the time:

Again, my mind was blown. I had been flying FPV for years before this, but this was the first time that I saw people put all these fragile components into what looked like nearly indestructible frames that would just bounce off of tree trunks. That’s when I got my first ‘racing’ drone. The sensation of skimming the surface of the earth at full speed, the changed perspective. The freedom of being able to just take off and explore the world around you, (within reason). I am still, totally, hooked.

Uh huh. Then what?

I was very fortunate to be approached In 2015 by Drone Wars, who with only a week before their event in July, asked me with the help of the small but burgeoning drone scene in Arizona, pull together the first, public, night time Drone Racing event in Tempe. That was very much the start of FPVlightrax. consulting and designing FPV drone race tracks for competitions in the US and Europe.

It was just one of the many courses David’s company has designed and installed. You can browse through them here, or check out the one below:

What was your initial reaction when you heard DJI was entering the FPV world?

DJI has been a part of the FPV world since pretty much the very beginning.  We’ve been using their parts and components in FPV drones for years, some of which can still be found. This is the first time that DJI is introducing a ready to go unit specifically for that ‘FPV’ experience vs an aerial videography drone. You could strap on a pair of goggles and fly a phantom FPV, but I wouldn’t cliff dive with one on purpose.

For sure. What else?

That’s where this drone is really exciting. Especially for people that have no drone flying or RC experience behind them. DJI’s products have been getting easier and more reliable to use every year. I’m really excited to have them introduce this one. It looks a little fragile to slam in a tree trunk or bounce off the ground, but it looks like it’s loaded with sensors to prevent that from happening in the first place. I’m interested to see how that will affect its responsiveness and if you can adjust or remove them.

What do you think, now that you’ve seen some leaks and the design?

It looks like a great long range FPV drone. Especially for people with no previous RC experience. 20 minutes of flight time? A camera that can record HD internaly and transmit it to HD goggles? + a reliable GPS that will most likely return the drone to me, yes please! Super excited to see DJI making a full ready to go, FPV specific drone. I can’t wait to see it fly through the Lightrax at full speed.

Who do you think this will appeal to and why?

I think this will absolutely appeal to people that want to get that visceral ‘flying‘ experience that you can only get while wearing googles; that want to do that straight out of the box, with no RC experience. Or having to muck around soldering wires to pads the size of sand grains and having to configure acronyms, you’ve never heard of on your computer only to be overwhelmed with a remote control with more buttons and switches than the cockpit of 1980’s commuter plane. Then after all the hours, days spent figuring the whole lot out, being terrified of destroying all your hard work in mere seconds by colliding with the ground, or losing it to some assembly failure on your part. This DJI FPV drone could be very appealing indeed. Now, how much for the whole lot?

Do you think there’s a market for people who want the FPV experience but aren’t into racing?

Absolutely. Racing drones is just an off shoot of FPV flying. Much like motorcycle racing could be considered an offshoot of motorcycle riding. Most of us fly FPV for the experience. There is nothing quite like the experience of seeing the world around you from the perspective of an eagle or a hummingbird. Racing is a bonus.

Any thoughts on what the racing drone community will think of this?

The more manufacturers that enter drone racing the better! This is a great way to stress test manufacturers components and technologies. I’m personally very much looking forward to the day we can have 20+pilots on the flight line transmitting full HD without tripping over each others bandwidths. Is this drone going to be faster and more maneuverable than a custom built, ultralight, carbon fiber racer? No. But if I gut it, Nascar style, it just might.

Lots of great thoughts from David Moquay. We really appreciate the time and care he took in crafting these answers… and look forward to lobbying David to install a smaller track in my backyard when the pandemic is over.