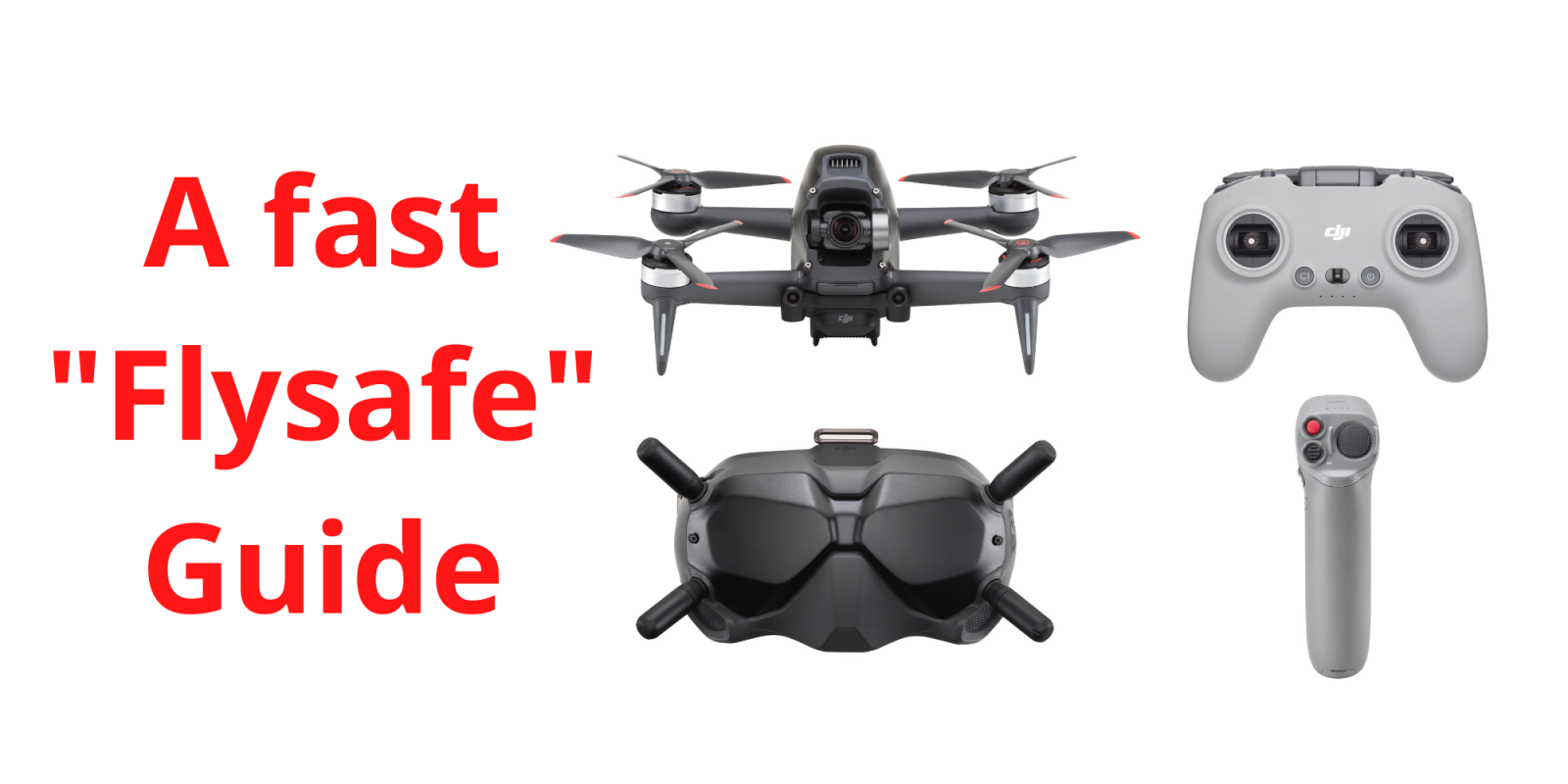 DJI’s new FPV drone combo has some amazing technology baked in. It’s also not inexpensive. So this post is for people who are not experienced pilots.

Manual FPV is not easy

Even if you are an experienced pilot of a stable, DJI-like product, there’s a big learning curve in going to manual flight. You need to keep your sticks constantly in motion for stability, making minute corrections as you fly. It’s a very different experience from flying a standard drone.

And for some people, that’s going to pose a problem.

There’s a big difference between “S” and “M”

On the DJI FPV drone, there are three modes: N, S and M.

N is normal mode and makes for an easy flying experience that’s pretty similar to any standard DJI product. The only difference you’ll notice with the goggles on is the single-axis gimbal, which means you’ll notice the aircraft banking even at lower speeds. Most DJI products (and most other non-FPV drones) have three-axis gimbals, which correct the camera view so that it’s always level with the horizon. It’s an easy mode for a beginner to get their feet wet, since the response is highly predictable and you can take your fingers off the sticks at any point and the drone will simply stop and hover.

Sports mode (S), by contrast, is faster. It’s also what DJI describes as a hybrid mode, bringing the feeling with the controls closer to the fully manual FPV experience.

But – trust us on this – taking that extra step to manual flight is a big one.

M mode is not easy for a beginner

Ask any FPV pilot, and they’ll tell you: They either spent a lot of time with a simulator, a small Tiny Whoop-style drone, or they crashed repeatedly and fixed their drone. Even with sim practice, most FPV pilots will crash from time to time. It happen, especially when you’re flying at speed and near obstacles. It takes time to get that muscle memory to a stage where a nano-second correction is second nature. And if you don’t correct in time? Well, you’ll likely be seeing a blur in the goggles and hear a distant crunch.

How to avoid crashes?

Well, the odds are pretty good you’ll still have a crash at some point. But the point here is to minimize the chances of that occurring. DJI is also aware of this and has put in some steps that will help you out. But they will only help out if a pilot uses them.

First off, there’s a new DJI simulator, now available on the App Store and coming very soon for Android. It takes you through familiarizing yourself with the controller features, including how to immediately take the drone out of M mode and into kind of an emergency brake, where the drone will stop and hover. This is great if you have time and the muscle memory kicks in. But for someone new to the drone, even that safety feature – and it’s a smart one – might not save you.

The best advice here is for you to use the simulator and fly in M mode only virtually. DJI has gamified the sim, so it feels very much like you’re playing a video game. Plus, you can do this simply with your phone and either the remote controller or the motion controller. But you need to put in the time. Once around the track is not enough.

I’ve spent a lot of time flying a Tiny Whoop around the house, but over the past couple of months, I have really hit the Velocidrone simulator hard. But since DJI’s simulator has been created specifically for use with its goggles and controller, that’s going to be a better bet for someone who purchases this combo.

We’ll say it again here: Work the simulator until you are flying naturally and the sticks start feeling more like an extension of yourself. If you’re not crashing and are feeling comfortable, that’s the time to go forth into the world with the drone and switch to N mode. Not before.

Here’s the other thing. When you have FPV goggles on, you are shut off from the world. You won’t know if a person is walking up behind you or a giant condor is circling above you, unless the camera happens to be pointed in that direction. Your world is what you’re seeing through those goggles.

That’s why regulators in the US, Canada, and elsewhere require that you have a second person with you on these flights. Their role is to be your eyes and ears while you focus on flying. If they see something, they can alert you quickly. This is a regulation. Sure, the odds are you’ll be fine on most outings. But you could easily be fined for flying solo.

In fact, while testing this drone with David Klein of Rotorgeeks, I acted as his visual observer. And that was a very good thing.

A strange Return to Home

While piloting with the goggles on, the battery got lower enough that the DJI FPV drone initiated an auto Return to Home sequence. That’s where the drone comes back and lands very close to the spot where it took off – usually within a few feet and, often, quite precisely. Before the flight, we had set the drone down at least four to five metres away (roughly 12-15 feet) away from where David was sitting. The familiar voice said: “The home point has been updated” before he took off.

Great, right? Let the technology do its thing.

Well, in this case, the drone went to our preset altitude for the trek back (a user preset that’s helpful if you want to ensure you fly above trees etc.). As it flew back towards us, I noticed that it didn’t line up with its earlier home point before commencing descent. In fact, it appeared to be pretty much above David’s head. As it started to come down, I warned David it appeared to be too close. Then I said: “Think you’d better take those goggles off and get out of the chair.” He did.

If we’d had the gimbal pointing directly downward, he probably would have seen more clearly. But it was a new-to-us controller, and the gimbal positioning switch was not yet second-nature. David is a highly experienced drone pilot. So if this could have happened to him…well, it could certainly happen to someone who’s brand new to the hobby.

Fly Visual Line of Sight with your spotter

The other thing to note here is that regulations also state that, unless you have received special permission in advance (something not easy to get), your drone must be flown within Visual Line of Sight, or VLOS. That means either the pilot or the spotter must be able to see the drone in the air at all times, and with the naked eye (or glasses). But your spotter can’t be looking through binoculars or a telescope.

We’re not the drone police. But we do believe it’s in everyone’s interest – both for safety and for the reputation of the industry at large – that people obey the rules.

In North America (and a growing number of other countries), every drone weighing more than 250 grams needs to be registered with either the Federal Aviation Administration or Transport Canada. In addition, pilots in Canada are required to have, at minimum, a basic Remotely Piloted Aircraft Certificate. This is a simple online knowledge test, and it’s important to have. In the US, the FAA is gearing up to roll out its TRUST program, which stands for Recreationa UAS Safety Test. At some point in the not-so-distant future, all pilots will be required to have passed this test and carry evidence they have done so.

Here’s what the FAA has to say on registration:

Drone operators must also have a compliant marking label with drone registration number for identification and additionally carry the Certificate of Registration, the certificate may be carried by using our Flight ID card. The Flight ID card contains your Certificate of Registration information as well as your photo. If you will be flying your drone as a hobby, you are required to register with the FAA. If you will be compensated for flying your drone, like selling the flight video or photos, you must register your drone under the Part 107 Commercial Drone System.

In addition to the “emergency brake” feature on both the remote control and the single-handed Motion Controller, DJI has put in an ADS-B receiver in the drone. That stands for Automatic Dependent Surveillance – Broadcast. It picks up signals from transponder-equipped manned aircraft. If a helicopter or a low-flying Cessna approaches, you’ll get a popup in the goggles and an audible warning. That means you should bring the craft back to home and land, then remove the goggles so you can see when the aircraft has passed your area.

It’s a feature DJI’s Brendan Schulman is particularly proud of:

You get the idea

Yes, there are a few things to remember. But they’ll help reduce the risk you might crash your drone, ensure the airspace is kept safe – and that you don’t get into any trouble. To recap:

We know. You want to get out flying. But with these simple steps, you’re likely to have a better experience and stay within the law. Go fly. But fly safely.

Oh – and if you haven’t read our review/overview of DJI’s new FPV combo, here it is. If you’re thinking about buying the combo, you’ll find it here.