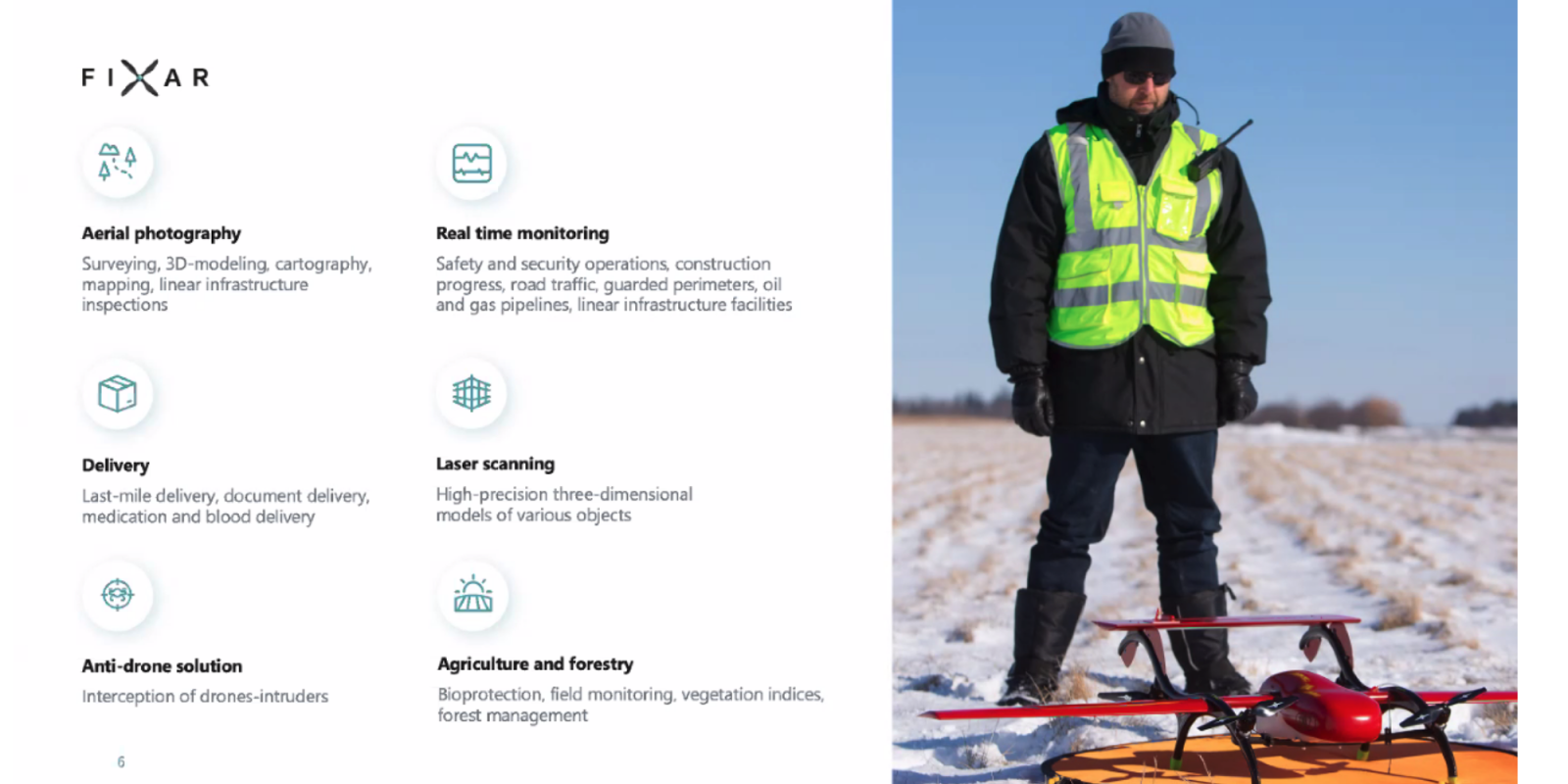 Baltic drone manufacturer FIXAR offered a window into its product today, with a webinar featuring a real-time assembly and demonstration of its product.

We wrote about FIXAR last summer, when its product received the green light for Visual Line of Sight flights in Canada. The product has been well-received, with distributors now in many parts of the world. One of its key features is its Fixed Angle Rotors (where the FIXAR name comes from), which means there are no moving parts during transition between vertical and forward, fixed-wing flight.

Yes, the rotors are turning. But the angle of those motors does not change. FIXAR says this simpler design, with fewer moving parts, is more robust and reliable than most other VTOL designs. It’s also more efficient than many five-motor VTOL designs, as the drone is not required to carry any dead weight during forward flight.

At the opening, FIXAR explained that its FIXAR 007 (named due to its seven-kilogram weight) is certified for VLOS flight in Canada, with similar certifications either complete or underway in other markets.

“We’ve passed the FAA certification, and are now going through the FCC,” explained Yulia Druzhnikova, FIXAR Director of Global Expansion. “We do expect certification in the European Union very soon, so we’re all set to work in all these countries.”

We’re all used to webinars by now. And FIXAR’s offering featured a video that gave attendees a view into the assembly, mission programming, and flight of the drone. It was kind of like being out there for a day in the field without the travel or cold weather.

It was fairly impressive. The drone went together quickly indoors and was programmed for a simple flight within minutes using the company’s proprietary Ground Control System software.

Then, the video took us outdoors where the flight was executed. It went off without a hitch.

During the video, Canadian distributor Philippe Saint-Martin (a commercial jet pilot and the CEO of VideoDrone) programmed the Ground Control Station (GCS) for a simple flight with about six waypoints. The system, in its current configuration, can handle up to 200 different waypoints. It looked super simple. He was asked how much training would be involved.

“The ground station is very intuitive,” he explained. “But still it is a high-tech piece of equipment, so we say two days to understand all of the different options and create a safe and professional flight plan.”

The GCS incorporates a relief map, so a 3D view of the mission planning reveals that the flight follows the contours of the ground. So if you plan an altitude say, of 100 meters Above Ground Level (AGL), the drone will maintain that height during the mission unless programmed to do otherwise.

The webinar also stressed that, once the FIXAR 007 has its mission planned, it’s hands-off.

The product’s inventor and CEO, Vasily Lukashov, joined the webinar from the company’s manufacturing headquarters in Riga, Latvia. Lukashov was a hobbyist in his teens, ultimately winning multiple competitions – including the European Championship in Air Model Sports. The fixed angle rotors design is his own.

The company says the drone can take off and land virtually anywhere and is suitable for long-range infrastructure and asset monitoring, precision agriculture, photogrammetry, and more.

“FIXAR is a solution for business,” says Druzhnikova. “When we created FIXAR, we were thinking about our end customers.”

FIXAR currently has 25 distributors globally and continues to expand its network. You can find out more information at the company’s website.

Editor’s Note: I’ve previous carried out some paid work for FIXAR. I was not asked to write this, nor will I (or DroneDJ) receive any compensation from FIXAR for the publication of this story.