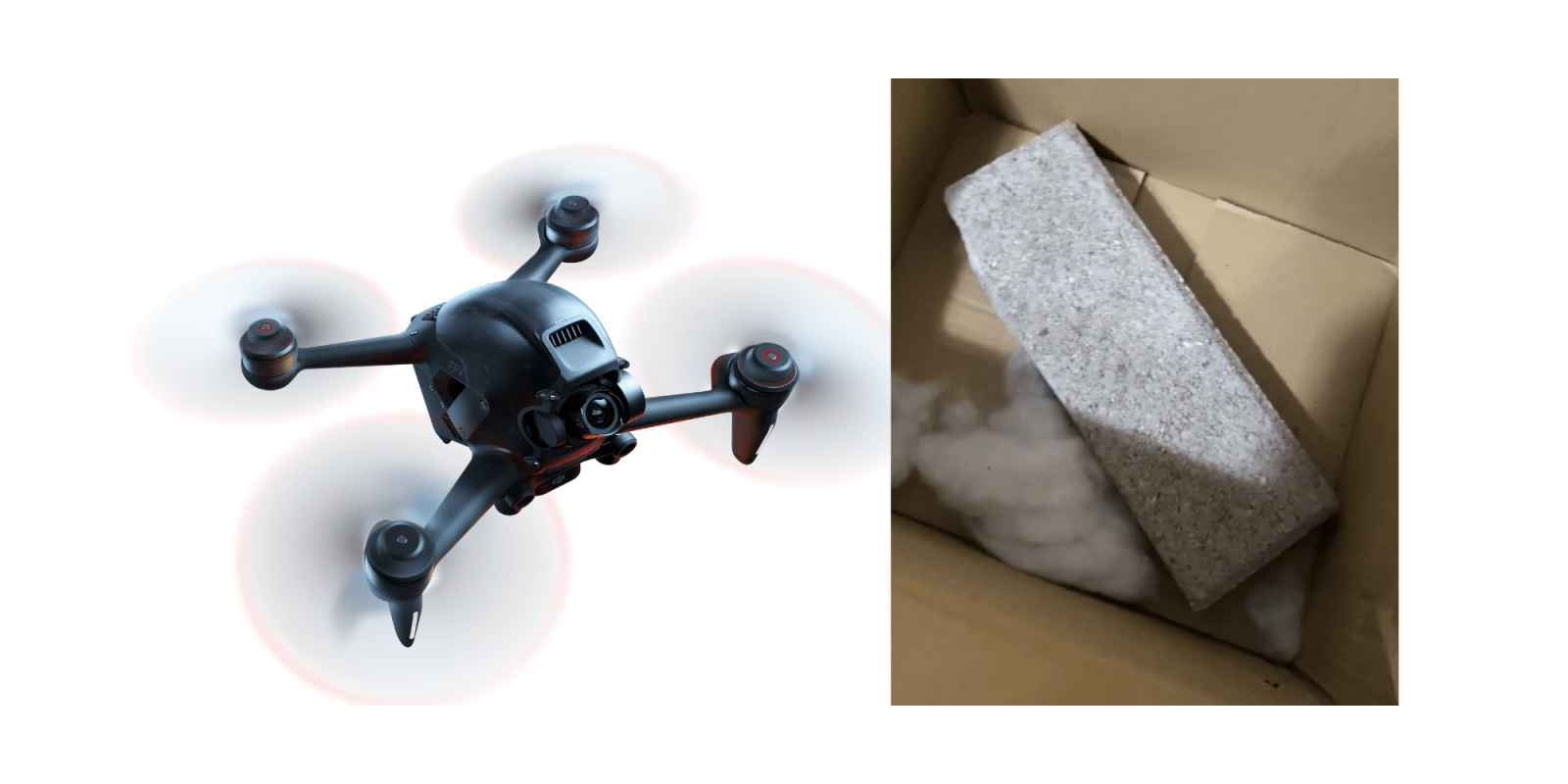 Some good news today: DJI customer Bryan Bailey has received a brand-new DJI FPV Drone Combo. Readers might recall that Bryan was the earlier unfortunate recipient of a box that contained an actual brick and a bit of stuffing.

It’s an unfortunate fact that we live in a world where scams happen all the time. And that’s certainly what happened to Bryan, a US-based long-haul trucker with a pretty impressive drone collection. Bryan recently added to that collection with a roughly $2,400 order from DJI. It included the DJI FPV Combo, the Fly More kit, the Motion Controller, another extra battery… and some extra props.

The FPV Combo didn’t arrive with the other shipment. And when it did arrive, Bryan felt something was off immediately. There was a heavy weight sliding around inside the box, and the tape on the bottom of the box was completely different from the rest of the packing tape.

Bryan knew something was off before he even opened the box.

“Instant scam,” he says. “I knew it had to have been from somewhere in between DJI and my house. It could not have been DJI.”

So he filmed the opening, revealing the contents: a brick and some padding.

We’ve heard of this happening before, though not with the DJI FPV Combo. Bryan, who is active on YouTube and Twitter (often posting about trucking, scuba diving, and ham radios), posted a video from his Ring doorbell showing the courier delivery, along with his opening of the box.

The reaction was swift. Some people sympathized, and a significant number of people jumped on to suggest that Bryan was trying to pull off a scam. Some of those posts were particularly nasty, including one person who said Bryan should die.

Seeing those comments, and Bryan’s predicament, led us to get involved. We had several conversations with him and had no doubt he was telling the truth. He was even hoping that DJI might be able to deactivate the drone so that the thief couldn’t fly it. And you’ve gotta ask yourself: How would such an action possibly serve a scammer? And would a scammer put out a video that would clearly be fodder for armchair detectives to pick apart if he’d faked this?

Bryan contacted the shipper and DJI to file a report. He also called the police, who came and took a statement. We caught up with Bryan in the midst of all this with a Zoom meeting. He joined us from the cab of his truck:

DJI took Bryan’s case seriously – and at a time when it’s shipping tons of products and undoubtedly dealing with other complaints as well. Before long, he received word a replacement was en route.

“I didn’t see it coming to an end this quickly, but they sent out a replacement as soon as they got their drones in a row and figured out what was going on,” says Bryan.

And yesterday, while Bryan was on the road, a new box was delivered. Bryan had increased the sensitivity of his Ring to activate video recording, so he was able to watch from the road when the delivery occurred. He had a roommate go and pick up the box and open it on camera.

And then, he pulled together this video. We’re old enough to remember some of those 70s action shows, and the music’s a perfect fit for that:

Bryan is still on the road for a couple of weeks, doing the long-haul trucking thing. But when he gets home he’s going to get out and fly – carefully. He says he’ll be taking his time before putting this into manual mode, and just simply enjoying the FPV experience.

Right now, though, he’s enjoying something else. Vindication.

“All I can say is: If it wasn’t a true story, DJI wouldn’t have replaced the drone.”