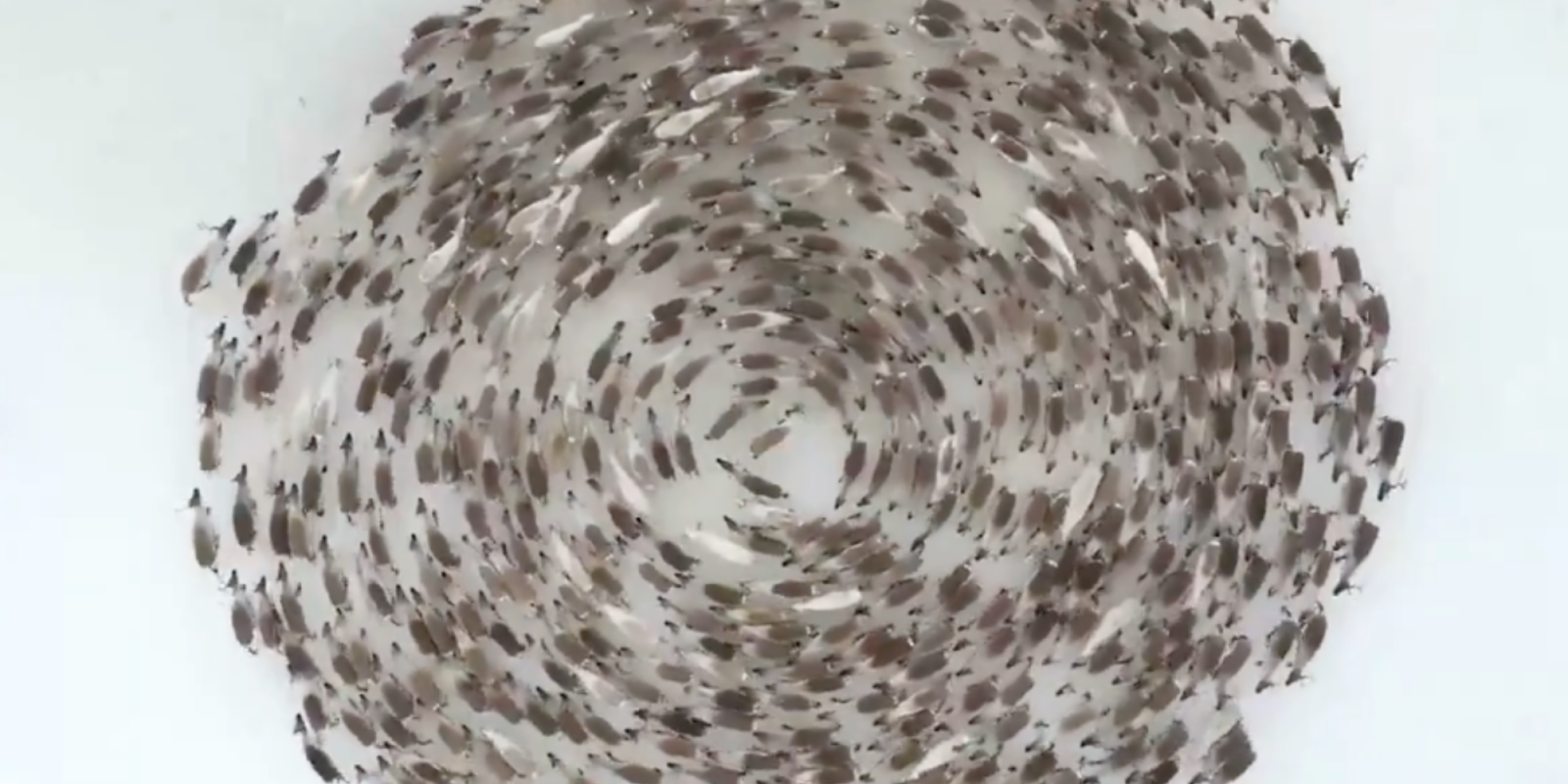 We thought we’d seen everything. Clearly, we hadn’t.

If you’ve ever watched a well-produced nature show (and I’m kinda thinking of you, BBC), you’ll have witnessed some remarkable adaptive survival techniques. One that always fascinates me is when a school of fish feels threatened. They will often quickly move into a tightly packed, rapidly swirling orb sometimes referred to as a bait ball. The goal is to create something large enough that it might cause the predator to back off, and – by keeping the school in tight formation – help prevent stragglers from getting picked off.

But it’s not just fish.

Not until today had we heard this term. But it came to us today courtesy of Science girl, a Twitter account that never fails to deliver interesting and obscure science content – along with much-needed context.

It seems it’s a similar evolutionary behavior to what we see with the fish. Except in this case, the reindeer pull into a tight little spiral, keeping the fawns at the center. And the view from above? Well, it’s pretty incredible. We’ve having an issue with the video embed, so you might have to click outside.

That initial tweet was part of a short thread, which included a link to this story. It seems reindeer have been doing this a long time (though not continuously). In fact, even the Vikings were confounded by these cyclones, which made it difficult for them to aim an arrow accurately at the moving mass.

This footage, in fact, comes from a documentary that aired on PBS in February called Wild Way of the Vikings. In the documentary, an actor notches an arrow and the herd quickly moves into cyclone formation. Here’s an interesting snippet from that article:

This behavior is also practiced by reindeer kept in corrals, occurring in groups of at least 20 to 25 animals, researchers wrote in a 2002 study published in the journal Rangifer. Penned reindeer formed “cyclones” and were observed to run “invariably” in a counterclockwise direction, the scientists reported.

Update: That’s a direct quote above, but these appear to be moving in a clockwise direction. Go figure.

And this particular cyclone?

Was it the actor that triggered the cyclone seen in this footage? Another predator, unseen but off to the side? Someone asked Science girl. It’s a good little Q&A:

And in the rare event you’ve never seen a bait ball or heard the sonorous tones of Sir David Attenborough, here’s a little bonus, from BBC’s remarkable Blue Planet series:

And that, my friends, ends today’s Ted Talk on reindeer cyclones.