Decisions, decisions: Air 2S? Wait for Mavic 3 Pro? Or something else? 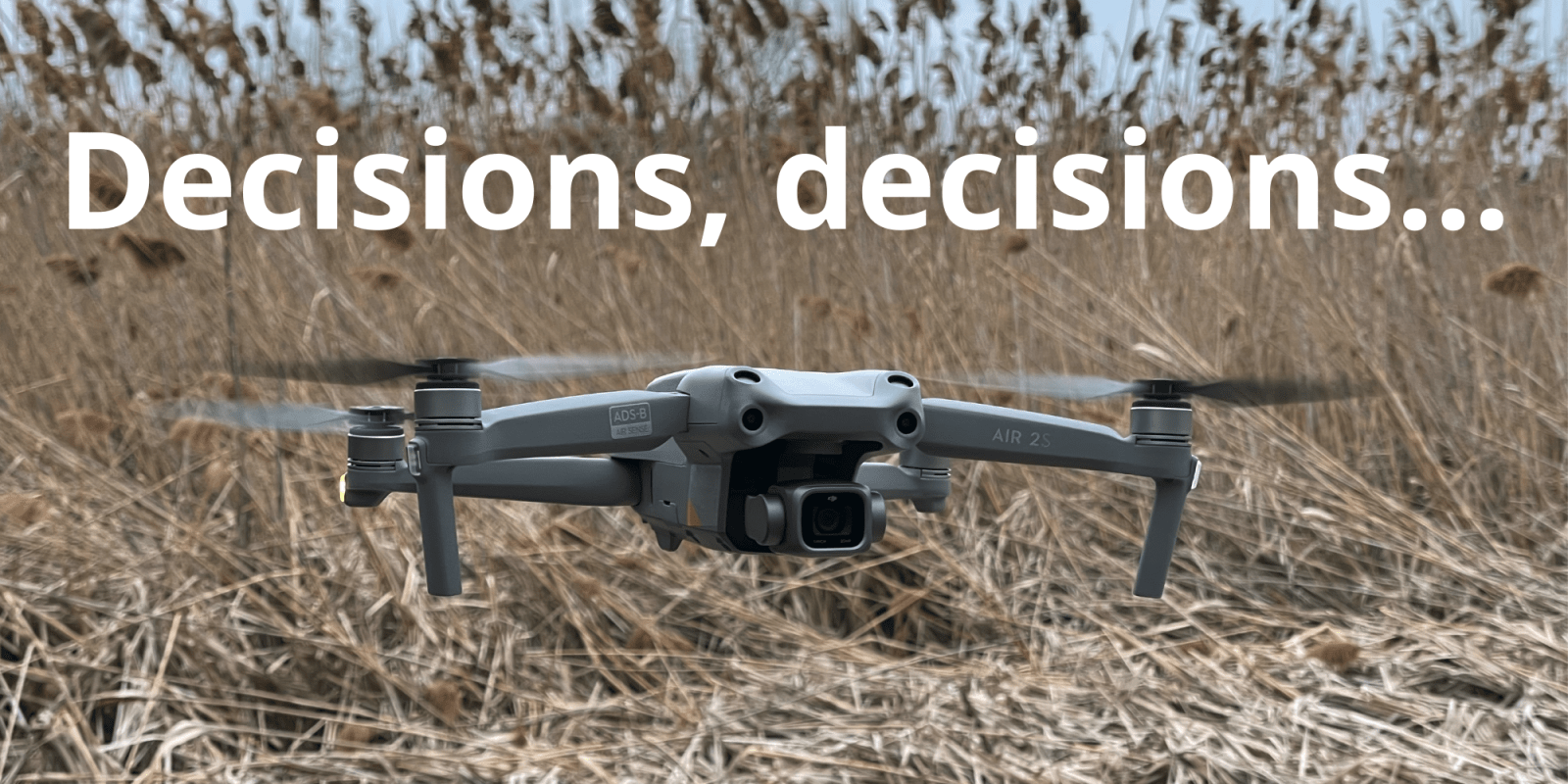 For some of you out there, it’s decision time. Regular flying season in North America is nearly here (though some in warmer spots fly all year round). And DJI has just released its Air 2S. What to do?

I have a personal interest in this topic. Because, like many of you, I’m considering a new drone purchase. DJI has recently made a couple of intriguing offerings, with its new Air 2S and the DJI FPV drone, released March 2. At the same time, we’re overdue for a refresh on the Pro line. Most of us (myself included) either can’t afford or can’t justify buying two drones in short order.

So let’s evaluate the options.

The Air 2S is, as many of you know, DJI’s latest release. The drone hit the shelves April 15 and is aimed at consumers (and some professionals) who want a lot of features and improved imaging in a really compact package. On that front, the Air 2S delivers. You can read our full review here (and we encourage you to do so, if you haven’t).

There’s much more, including two additional obstacle detection sensors and Master Shots, which takes pre-programmed shots and edits them into completely different videos based on a template you choose in DJI FLY. It also features Air Sense, the detection system that will warn you if an ADS-B (Automatic Dependent Surveillance – Broadcast) transponder equipped manned aircraft is approaching the area where you’re flying.

We also believe more features will be unlocked with a future firmware upgrade.

Does the Air 2S have everything?

Well, for some people it will. If you’re looking for a drone with great stability, flight time (31 minutes) and imaging, this could well be your ticket. The full enchilada Fly More combo is $1,299 and the basic drone, controller, and one battery is $999.

But some imaging professionals will still find the drone lacking. Why?

The Air 2S has a fixed, f/2.8 aperture. If you were only shooting stills, that would be fine. But for people who want to capture video, most professionals will prefer a variable aperture (unless they’re flying a heavier rig). Put simply, a variable aperture gives you more options for control over light. That means it’s easier for you to capture, say, 24 FPS footage with a shutter speed of 50. A shutter speed like that will look significantly more cinematic than the much higher shutter speeds required with an f/2.8 fixed aperture (which lets in a lot of light).

DJI provides a Neutral Density filter kit with the Air 2S Fly More combo. Depending on the amount of light, choose a filter that will allow you to set your desired shutter speed. For many, this will be a perfect solution to the fixed aperture issue.

But some will want more.

That’s why some people are waiting. The Pro line features a variable aperture, offering more manual control. Many also anticipate that the Mavic 3 Pro will also feature whatever secret sauce goes into the Hasselblad-branded camera that’s likely to appear on this drone. (On paper, the Mavic 2 Pro and the Air 2S have the same sensor, but there’s much more to a camera than the sensor alone.)

Undoubtedly, the Mavic 3 Pro will have some other features as well. What they are, we can’t yet say because we don’t know. We’ve seen some wishful thinkers suggest it might have a Micro Four Thirds system with interchangeable lenses. We consider this highly unlikely in a machine that size. Such a move might also cannibalize sales from the Inspire 2, though that’s clearly a very different beast.

Depends on who you are. If you’re not looking to buy a drone this year, wait as long as you’d like! But if you’re considering picking up a new drone, you may have some thinking to do.

Our take? For someone who makes a living with pro cinematography, it’s likely worth hanging around until sometime this fall, when we expect the Mavic 3 Pro (or whatever new name DJI gives it) will be released.

But if you’re flying for enjoyment, and maybe real-estate photography or something like that, the Air 2S offers a substantial improvement over the Mavic Air 2, which uses a technique to obtain its 48MP status that a purist will tell you is no rival for a “true” 20MP image.

It’s a tough call, depending on what you want and need (and if you want rock-solid tracking, consider the Skydio 2). But the Air 2S is truly a stellar little drone, with a ton packed into its compact, 595-gram body.