Remote ID: When it comes, DJI drones will be ready 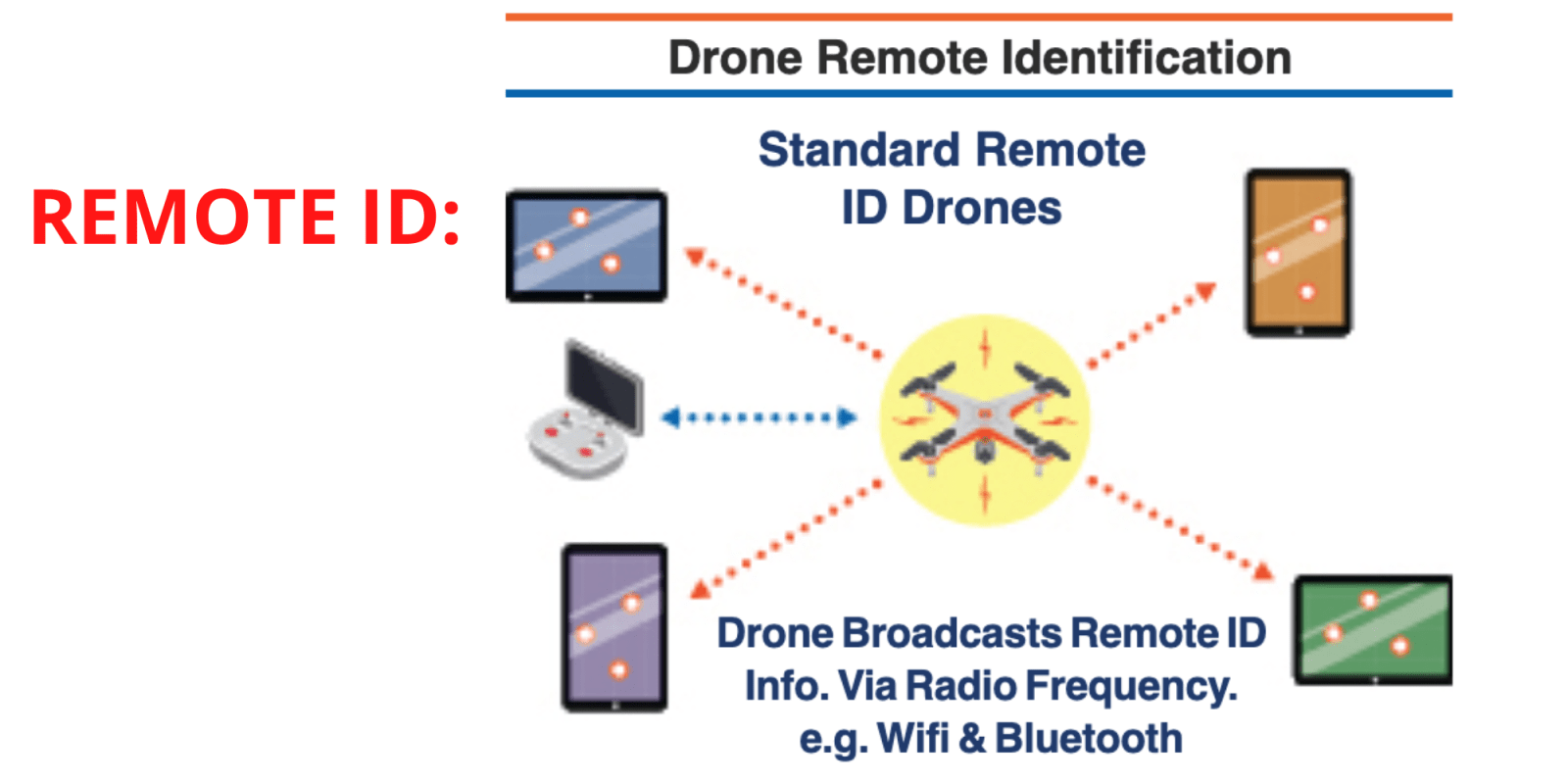 The new FAA Remote ID rule goes into effect Wednesday, April 21. Let’s explore what that means for you as a pilot. This story will be of use to all pilots of drones weighing 250 grams or more, and there’s some DJI-specific news for those flying DJI products.

Regulators are concerned with keeping the airspace (and the ground) safe for everyone. That’s why the Federal Aviation Administration (FAA), Transport Canada – and the airspace regulators in most other countries around the world – have instituted rules for drones in recent years. It’s important to have rules in place that minimize the chance of a conflict between manned and unmanned aircraft, or between unmanned aircraft and people and property on the ground.

Safety is also the impetus behind the new Rule on Remote ID, which goes into effect today (April 21).

Well, sort of goes into effect. Because nothing is going to change for pilots, at least not yet.

What is Remote ID?

The best way to think of Remote ID – and the analogy most commonly used – is that it’s like a digital license plate. It’s a transmission from drones weighing 250 grams or more that contains its position in space and the unique FAA registration number. It will also provide the location of the ground station or takeoff location.

This information can be received by others, providing they have an app that can pick it up. The transmission does not contain the name of the owner of the drone (though certain parties, like law enforcement and the FAA, will be able to access that information if necessary).

Remote ID helps the FAA, law enforcement, and other federal agencies find the control station when a drone appears to be flying in an unsafe manner or where it is not allowed to fly. Remote ID also lays the foundation of the safety and security groundwork needed for more complex drone operations.

We’re not here to debate whether Remote ID is a good or bad thing (and the rule is being challenged in court). We can certainly tell you that it’s controversial, and that a lot of people wanted to weigh in when the FAA opened the door for public commenting. When the FAA published its Notice on Proposed Rulemaking back in December of 2019, it also opened a 60-day window for input.

The response? Some 53,000 submissions from drone pilots – likely including some of those reading this story. The FAA reviewed those comments and considered the feedback when drafting the rule, which was published in the Federal Register on January 15, 2021. The effective date was originally going to be in March, but got bumped due to some corrections made to the initial rule.

What does this mean for you?

Not much, at least not right now. But down the road, you’ll either have to have a drone with built-in capabilities to transmit its Remote ID – or an external module attached to the drone that does the same thing. There’s but one exception: A drone not equipped to transmit Remote ID can still be flown, but only within a special box designated by the FAA as an FAA-Recognized Identification Area, or FRIA.

The FAA has an excellent graphic on its Remote ID FAQ page, which we’re borrowing for use below:

If you own a DJI product, particularly a newer drone, you may have noticed a sub-menu within the DJI FLY app. In that section, there’s an option to fill in a couple of fields for “Remote Identification.” And while that’s kind of confusing, rest assured this is not for Remote ID. (Whatever you fill in those boxes can be picked up by DJI’s Aeroscope, a pretty impressive piece of drone detection technology.)

This actually fooled us when we were pulling together our video review of the new Air 2S (we caught the error, but you can see how easy it might be to confuse this).

And that got us thinking: Is the Air 2S Remote ID ready? What about other DJI products? Will they meet the new requirements, which are coming into effect over the next three years. Well, the good news is that DJI’s Brendan Schulman, the company’s vice president of policy and legal affairs, has written a very informative blog on the issue. Brendan know regulations… and he knows drones.

The piece Brendan wrote is really worth reading. But we know some of you won’t get there, so we’re going to pull a relevant quote or two. The first, which will absolutely interest many of you, touches on DJI’s plans when it comes to the new rule.

All drones that are flown outdoors, unless exempt, must perform Remote ID by…October 2023, and DJI expects many of our most commonly used drones to be able to comply through a simple and free software update. It’s too early to say exactly which existing DJI drones will be able to be updated this way, however, because the technical standards for Remote ID haven’t been finalized and approved by the FAA. Once they are, we can evaluate whether the radio hardware of each model can meet the standard and begin our plans to update specific models.

We’d previously read that the FAA was considering either Wi-Fi or Bluetooth technology for the Remote ID protocol. So when we saw Brendan’s post, we dropped him a note to ask. Does DJI’s plans to make drones compliant via firmware mean the data will somehow be embedded in the transmission between your controller and drone?

Nope. Here’s what he told us:

Remote ID will be accomplished via a radio broadcast using the on-board Wi-Fi antenna hardware. We actually did a demo of this in Montreal about 18 months ago, using the ASTM (American Society for Testing and Materials) International standard. That standard needs to be finalized by ASTM, and then accepted by the FAA as a means of compliance. Which models of DJI drones will be able to do this depends on the final standard, but our hope is that many popular models can be upgraded with a free software update, prior to the compliance deadline in 2023.

What if you’re still flying an original Phantom?

Not everyone has the money – or the need – to upgrade every time a new drone comes out. Here, Brendan’s blog indicates that even products that are long in the tooth will still likely be able to comply. (Don’t be surprised if DJI produces a module for this down the road that can be attached to any existing drone – including those produced by other manufacturers). Here’s what he wrote:

Our goal will remain to make Remote ID as easy to comply with as possible. DJI will likely roll out updates across our product lines in phases, taking into account their popularity and where they are in their lifecycle as the FAA deadline approaches in 2023. Since the FAA will allow drone pilots to satisfy Remote ID requirements with a separate add-on module, we anticipate every DJI drone – even the oldest ones, long out of production – will have a pathway to compliance for anyone still operating them.

We’ve said it before and we’ll say it again: We’re not the drone police.

We do, however, believe in following regulations and try to use articles like this as an opportunity to shine a bit of light on important rules. Remote ID is one piece of the puzzle as the world moves into an era of growing airspace complexity. And while nothing is required of you for some time yet, it’s best to be aware this is on the runway.