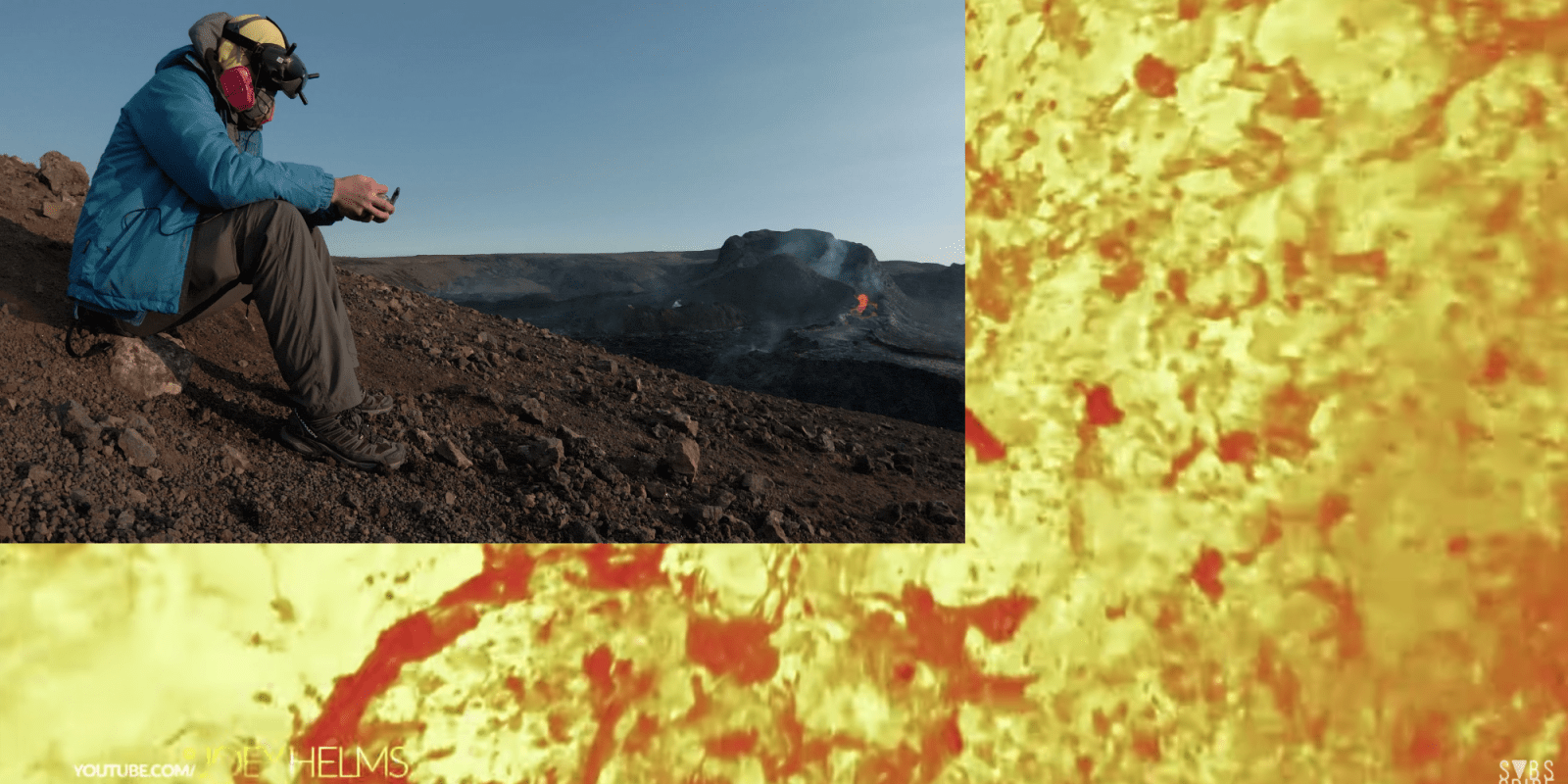 We feel a bit like rubberneckers at a traffic accident: We just have to slow down and look. (Or, in this case, let the pilot slow things down in post-production.) It ain’t pretty – it’s gorgeous.

Perhaps you’ve had enough of the Fagradalsfjall volcano erupting in Iceland. Seen one drone video over lava, seen ’em all, right? Well, not so fast. Sure, we’ve posted our share of videos from that incredible eruption. But, like the volcano itself, they’re ever-changing. And this one, involving the demise of a DJI FPV drone, is worth watching. We also interviewed the pilot for his thoughts.

Let’s get into it.

The man behind the sticks is Chicago-based Joey Helm. The filmmaker-photographer has been flying drones since 2015, but actually only started flying First Person View this year. He owns the DJI FPV drone, as well as the Mavic 2 Pro. He’s also, clearly, a traveler. And Iceland tops his list:

Iceland is my favorite place on this beautiful planet. It is just simply otherworldly and allows you to feel deeply attached to the raw nature of our earth. As a filmmaker and photographer, the quality of light there is also beyond.

Flying a volcano can’t be a simple task. We asked Joey what he found was the greatest challenge:

The winds! No question. Iceland is always super windy but mix this with the heat and hot gasses emitted around the eruption the whole situation becomes more unpredictable. You see dust tornados forming and other sudden and strong wind gusts you cannot predict. Actually I was very impressed how stable the Mavic 2 Pro was given the circumstances, though with FPV drones it is all in your hand to counteract upwinds or gusts, so often I just went with the flow.

He was flying two drones at the site: His DJI FPV and Mavic 2 Pro. He’d had eight successful flights with the FPV unit before its final mission.

Prepare to meet thy doom

Okay, enough drumroll. Watch in amazement as the DJI FPV drone approaches the God of Fire, only to be consumed by it:

I mean, we can see what happened: A giant blob of lava got up close and personal. But was this intentional, or an accident? “I leave it to the viewer’s interpretation if this was an accident or on purpose,” says Joey. “Leads to interesting discussions.”

And, in case you’re wondering, Joey has no regrets.

I mean, the experience flying first-person so close around a volcano is absolutely unreal and impossible to describe. Not only the perspective but especially the freedom an FPV drone provides you with in such an environment makes it an absolutely unforgettable experience.

We’re sold. (If anyone from Visit Iceland happens to be reading – cough – feel free to reach out.)

One more important thing: Joey has a series of videos from the volcano coming, and also plans to revisit Iceland shortly. Consider giving his popular YouTube channel a follow, and checking out his website.