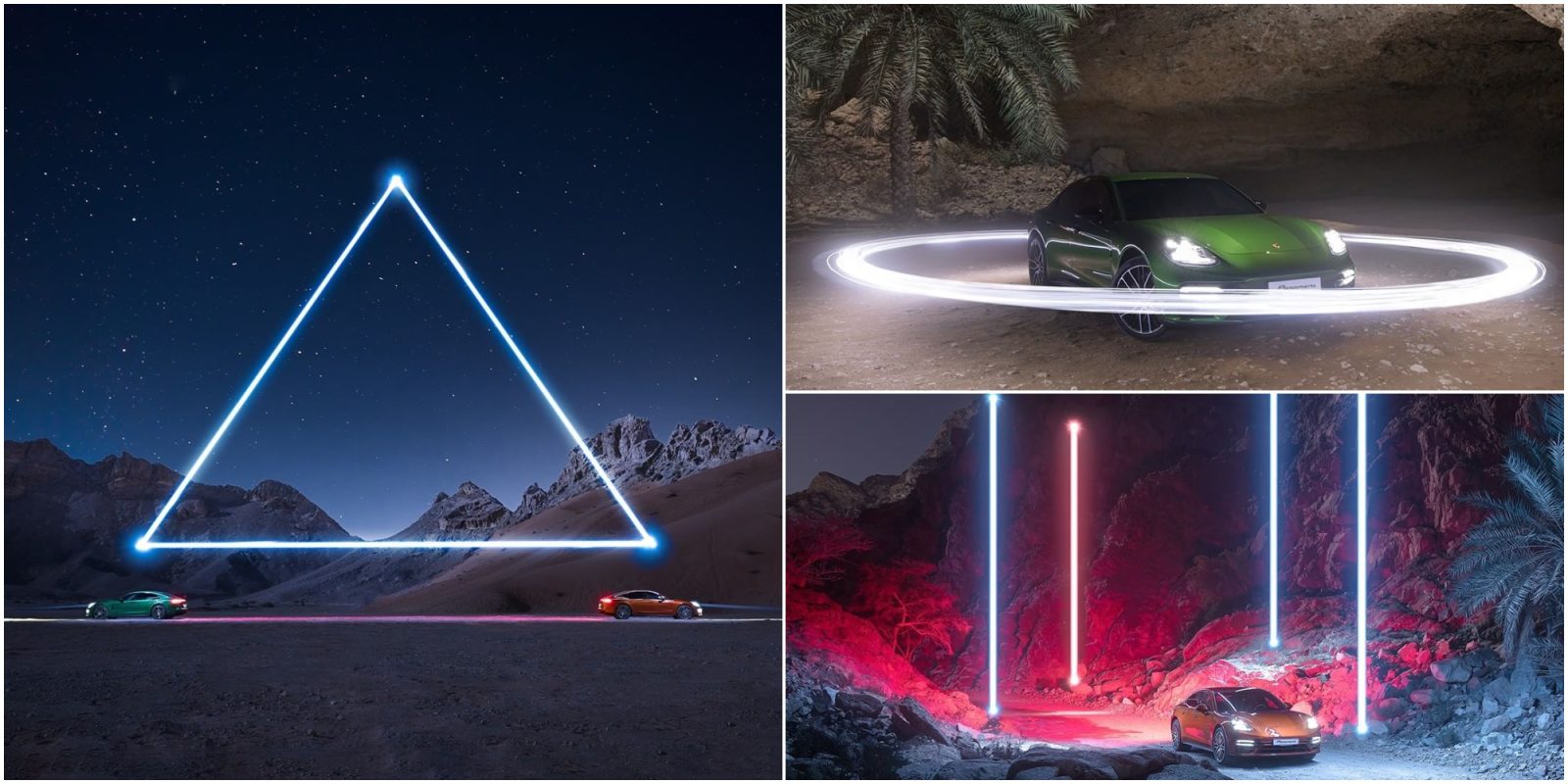 Car designers spend countless hours creating shapes and refining lines that we often take for granted. But Porsche Dubai’s photo shoot for the new 2021 Panamera celebrates the machine’s contours at a scale so grand that you can’t help but take notice. And adding a futuristic, cyberpunk feel to this surreal ad campaign is a photography technique called drone light painting.

Porsche is known for pushing the limits of great automotive photography. So, we weren’t really surprised when we heard that the carmaker was giving three avant-garde photographers complete creative freedom to capture the new Panamera from their perspectives in its “Reflections of Passion” advertising campaign.

One of these photographers, Baber Afzal, decided to put drones to work.

Drone light painting, defined simply as a long exposure photo that leverages a combination of moonlight and drones with LED lights attached to them, has given us some of the best drone-based art. Photographer Reuben Wu has been painting night landscapes with the help of drones and LED lights for quite some time now. Heck, we, at DroneDJ, have been going ga-ga over his drone-created halo effect to rock pinnacles since 2018!

Taking inspiration from Wu’s drone light painting work, Afzal decided to add the Porsche Panamera’s own headlights and tail lights to the drone LEDs, and traditional photographic lighting while illuminating the scene.

And with the shoot taking place in a valley near Khor Fakkan in the United Arab Emirates, the IPA award-winning photographer’s playing field suddenly came alive with a lot of interesting rock formations.

In a behind-the-scenes video, the photographer explains that his vision was to merge the sports sedan’s beautiful contours with nature and the environment and create a sense of order in natural chaos. Drone light painting allowed him to do so while creating a “wow” effect for the audience. He says:

What really excited me about this collaboration is not only the freedom I was given to do whatever I want, but there was no interference of any sort. That’s what really gravitated me towards it, and helped me execute it in a totally different way.

Interestingly, Afzal and his team were faced with some unique challenges during the shoot. A last-minute rescheduling had to be done because the team didn’t anticipate a rush of weekend traffic would cause unavoidable delays. Further, the GPS reception in the Khor Fakkanvalley was quite poor, which made it difficult for the drones to take off and follow their programmed paths accurately.

But in the end, the team’s perseverance prevailed and Afzal managed to capture something that would take automotive photography to the next level.

You can find more of Afzal’s work on his Instagram.