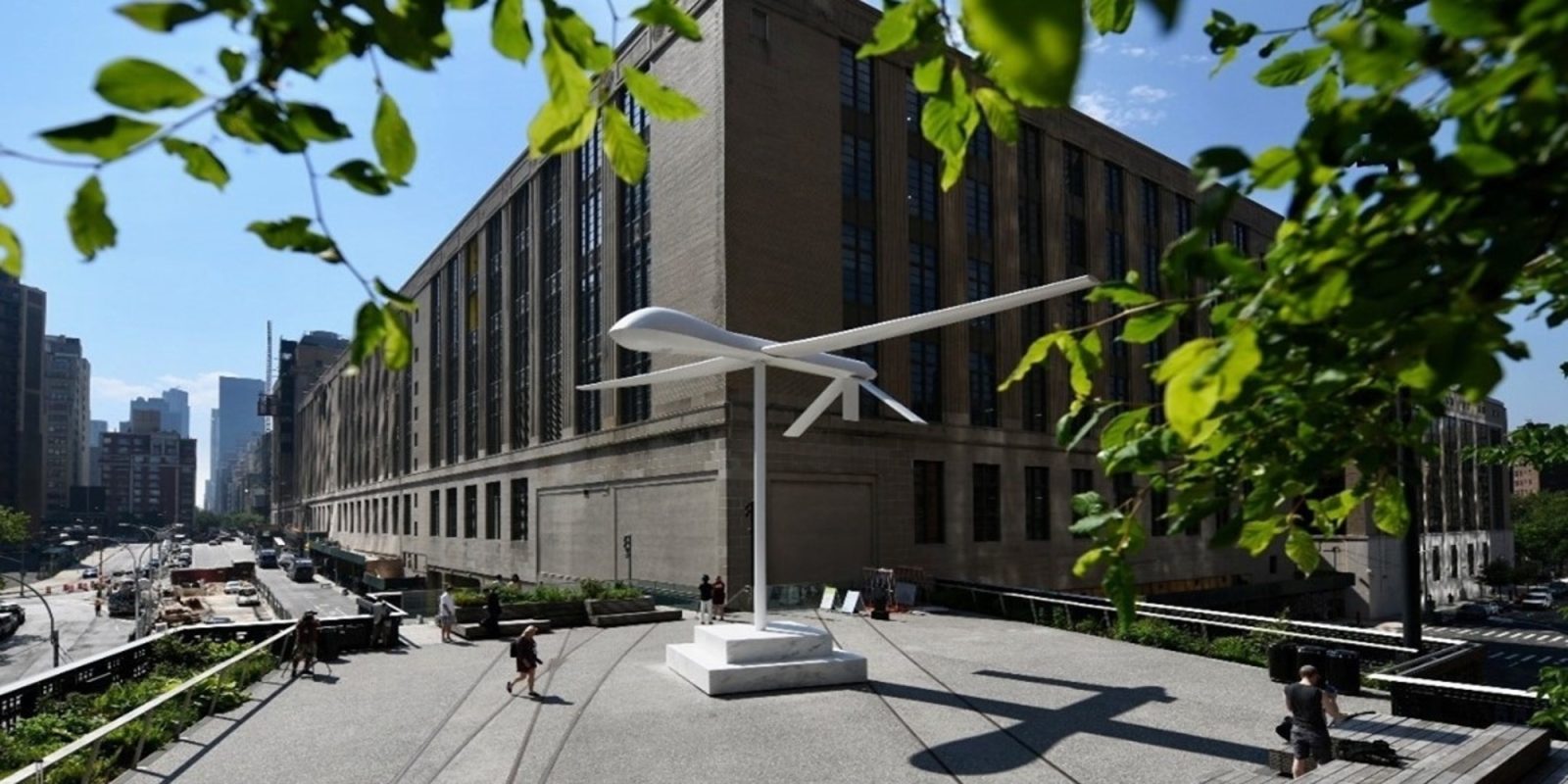 A giant fiberglass sculpture in the shape of a drone has turned up atop a 25-foot-tall steel pole in a public park in New York. The structure is stripped of all details – decals, landing gear, cameras, or even weapons. But what is it doing there in the first place?

The sculpture is by Sam Durant, a Washington-born artist who lives and works in Berlin. It was commissioned by Manhattan’s High Line, the only park in New York City with a dedicated multimedia contemporary art program. Durant calls the giant installation Untitled (drone), thus giving viewers the freedom to interpret the art in their own way.

If you look closely, you will notice the sculpture is modeled after the Predator drone. This drone was used by the US military to conduct reconnaissance and airstrike missions in faraway nations. Closer to home, its successors are currently employed by US Customs and Border Protection and law enforcement agencies for surveillance activities.

Durant says Untitled (drone) is meant to animate the question about the use of drones, surveillance, and targeted killings in places far and near. The installation also aims to make people think whether, as a society, we agree with and want to continue these practices. He quips:

Art is a place where we can speculate about alternatives, other possibilities, where we can bring forward things that are unsaid, unknown, or hidden from view, and have discussions about them. Art offers us the opportunity to think about the world in new ways. In moments of crisis, this is extremely important.

But just because Durant is portraying drones as a symbol of war and unfair surveillance in this project, it doesn’t mean that he is blind to the machines’ many benefits. He does acknowledge the contribution of drones for humanitarian purposes, such as delivering supplies and medicine to isolated locations, surveying minefields, and taming wildfires that have ravaged landscapes.

On some levels, Durant says, Untitled (drone) is a manifestation of his experiences as a ’60s child. He recalls how his mother would take him to anti-war demonstrations and civil rights marches even while he was in a stroller:

These were very formative experiences of political protest and unrest. And because of the anti-Vietnam war movement, I gained an understanding of what war is and how it works, as well as who benefits from it and who it’s really for. I don’t think there has ever been a just war.

Interestingly, Durant’s father used to be an airline pilot, which means he has been immersed in the world of aviation also since he was a child. Durant believes that experience may have also contributed to the evolution of the Untitled (drone) project.

You can watch this short interview of the artist to learn more about his work and inspiration:

The installation will remain on view in New York’s High Line park through August 2022.