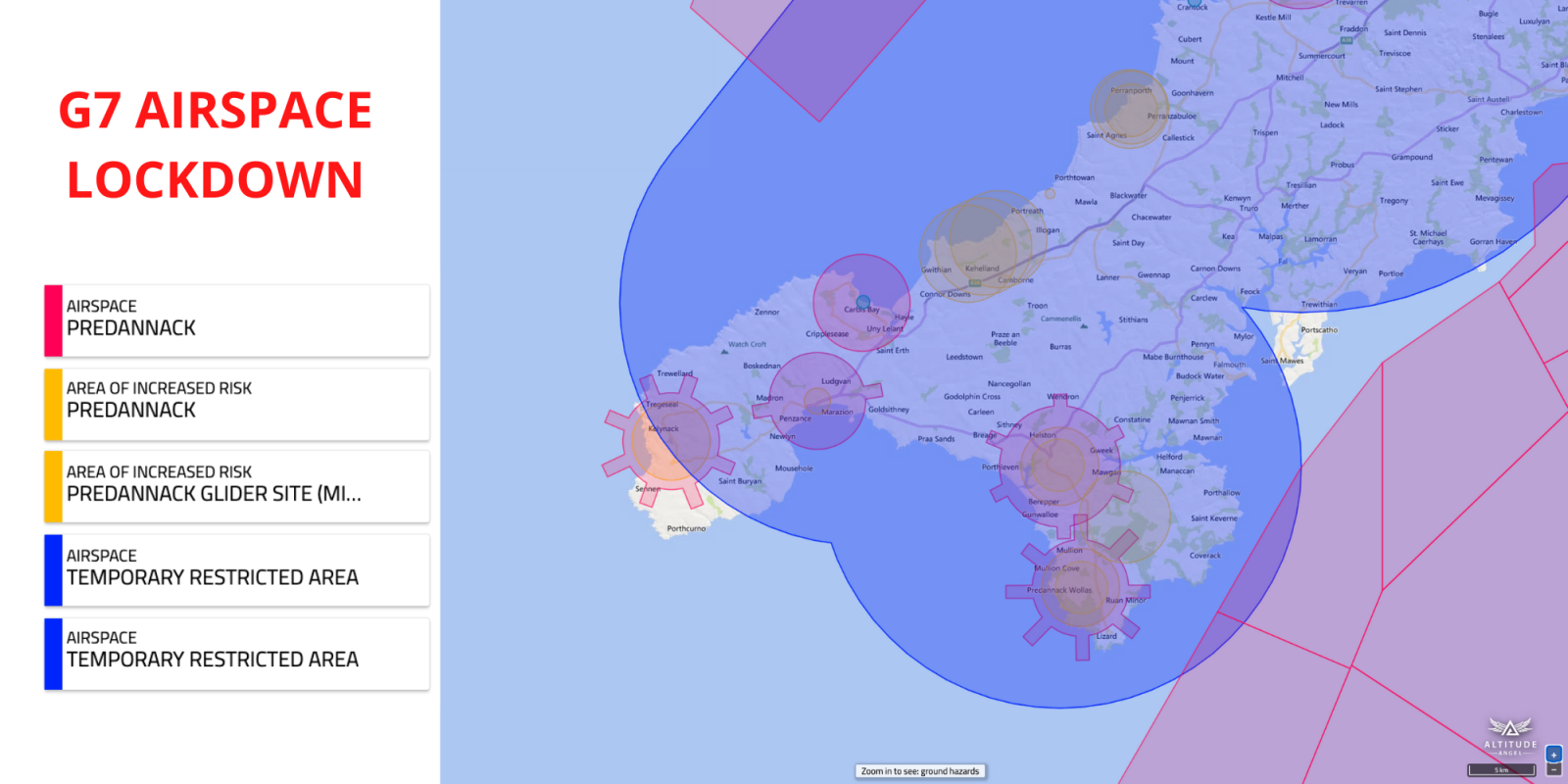 Planning on doing some drone flying near the G7 Summit? We’ve got some advice: Don’t even think about it.

It’s time once again for another G7 Summit. This one is taking place in Cornwall, England, from Friday, June 11 through Sunday, June 13. And, not surprisingly, there are some pretty tight airspace restrictions in effect that effectively shut down the sky to any drone operators (unless you happen to be involved with G7 Summit security).

When you’ve got some of the world’s most powerful leaders all in one place at one time, it’s not surprising that the folks involved in security want to minimize the likelihood of any surprises. And so it’s understandable that the airspace would be closed to drones.

It’s not just the media or curious onlookers/pilots security details would be concerned about. Though it’s pretty rare, even consumer drones have been converted to carry out more nefarious tasks. So the possibility of an extremist organization flying a drone equipped with a weapon of some sort (or even an activist group flying a drone with a banner) is a scenario security will want to avoid.

But would an extremist organization bother to pay attention to a NOTAM (Notice to Airmen) restricting non-G7 aircraft and drones from such a space? Not likely. But you can be absolutely certain that the people running security will have drone detection gear on hand.

Some of this equipment is pretty sophisticated and can locate not only an incoming drone and its details and trajectory but also the location of the pilot. In addition, there are drone “guns” that can disrupt the signal between a drone and its pilot and even bring a drone directly down – almost like it’s caught in a tractor beam. Check out this device from drone counter-measure company CERBAIR, which we wrote about yesterday:

The sky above Cornwall will look very different over the next few days. Whilst drone and light aircraft activity will be banned, the skies won’t be quiet. There will be an increase in military activity so anyone living or on holiday in the area will be treated to the sights and sounds of helicopters flying overhead. I would strongly recommend any pilot in or around the South West of England, of either a manned or unmanned aircraft, check the status of the airspace over which they intend to fly this weekend using dronesaftetymap.com or by downloading the Drone Assist app. Either flying or straying in to the restricted airspace might not end well…

We hopped onto the drone safety map, and you can clearly see the affected area:

But what do those zones mean?

Good question. All you have to do is click on the different areas to get a snapshot of what’s happening:

And there is (there always is). Click on any one of those boxes for full details.

You can also receive the full text of the NOTAM.

Altitude Angel is one of a growing number of companies offering you a little window into airspace for mission planning purposes. Remember the saying that “Ignorance is no excuse for the law?” (Or variations thereof.) It’s true. The fact a pilot didn’t check to see if there were NOTAMS in effect is simply not going to fly.

And, while the G7 is on, neither should drones in this area.