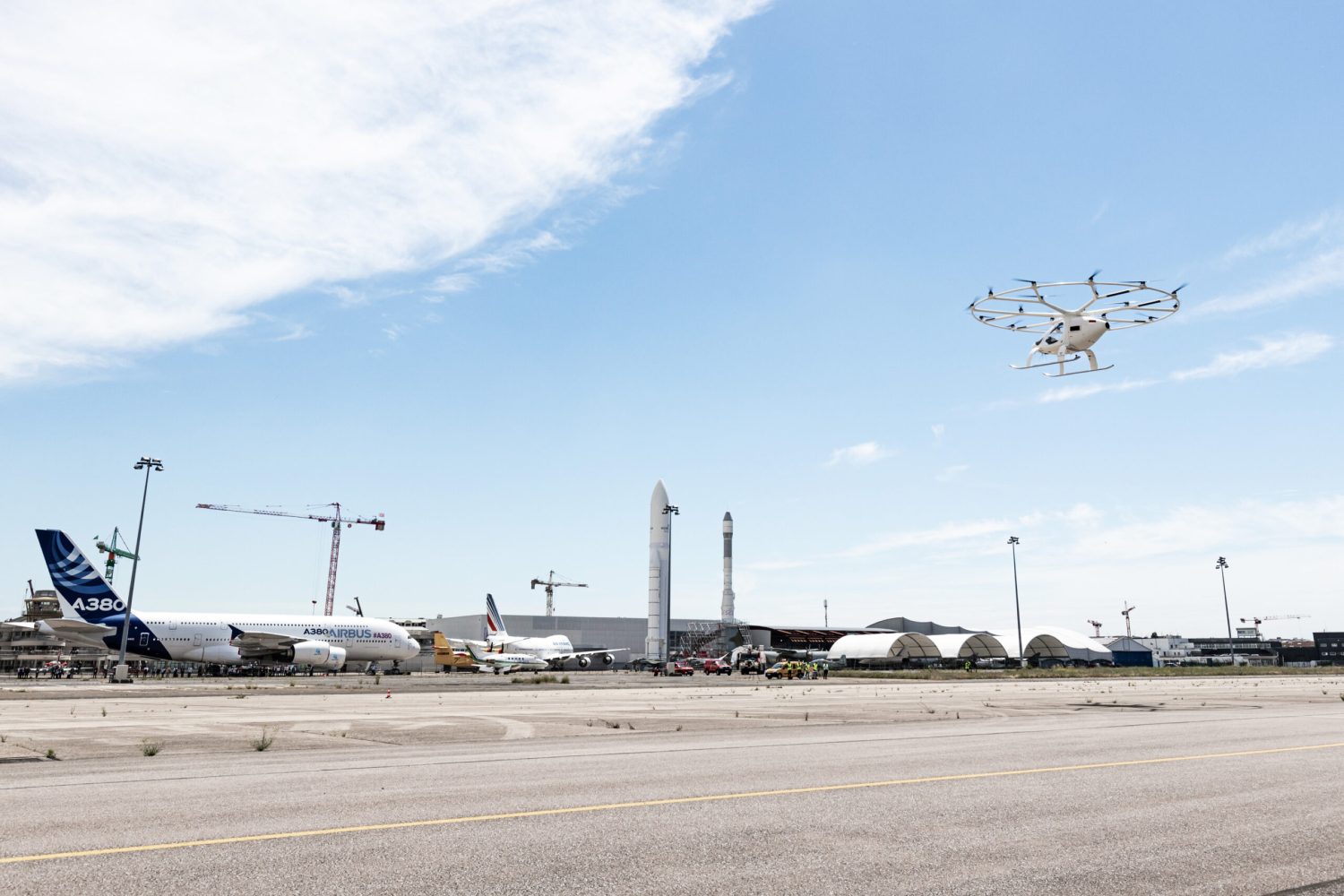 The future of European urban air mobility (UAM) drew a little bit nearer after German vehicle manufacturer Volocopter piloted the first public flight in France of its 2X copter. Company officials say they hope to have a similar craft in commercial air taxi service in time for the 2024 Paris Olympic and Paralympic Games.

The electric vertical takeoff and landing 2X prototype took a quick but impressive spin around the Le Bourget airfield during the Paris Air Forum Monday. Though built to transport two people and luggage, the craft was flown empty during its three-minute, 1,640-foot journey. It reached speeds of up to 18 mph, and an altitude of about 100 feet. That was enough for Volocopter and its partners in Paris’s public transportation sector to declare the demonstration a resounding success.

“Today, we were as close as never before in France to experience electric aviation,” said Edward Arkwright, deputy CEO of Groupe ADP, which operates Paris region airports, and is one of Volocopter’s French partners. “Volocopter is a vivid example of what the futures of aviation could look like, both carbon-free and innovative, that Groupe ADP wants to accompany thanks to our infrastructure assets, expertise, and know-how.”

The two groups, along with Paris rapid rail transport authority RATP Groupe, are among the 30 main participants in RE.Invent Air Mobility. That initiative was launched last year to make Paris the leader in UAM activity. It aims to create an end-to-end collective that can accelerate UAM development in Paris, covering critical aspects like vehicle production, urban infrastructure, operation, airspace integration, and public acceptance.

Going for UAM gold at the Paris 2024 Summer Games

Following Monday’s demonstration flight, it was made very clear the first, major goal the group is planning to reach is establishing some degree of commercial air taxi service in time for the Paris Summer Games.

“The first flight today in Paris highlights Volocopter’s commitment to bring air taxi services to this region in time for the 2024 Olympic Games,” said Volocopter CEO Florian Reuter. “The alliance of the Paris region, Groupe ADP, and RATP Groupe and their intent to bring electric air taxis to France is a stellar example of the collaborative approach we see to be the most successful for adding this exciting category of mobility to cities globally.”

Reuter estimated the total global UAM market at more than $10 trillion, and thinks the sector Volocopter and its rivals are targeting will be worth $300 billion by 2035. He said air taxi service planned for Paris would initially use onboard pilots in accordance with current regulations. Over time, however, Reuter said passenger flights would be fully automated. All Paris operations are expected to use the company’s two-seat Volocity craft.