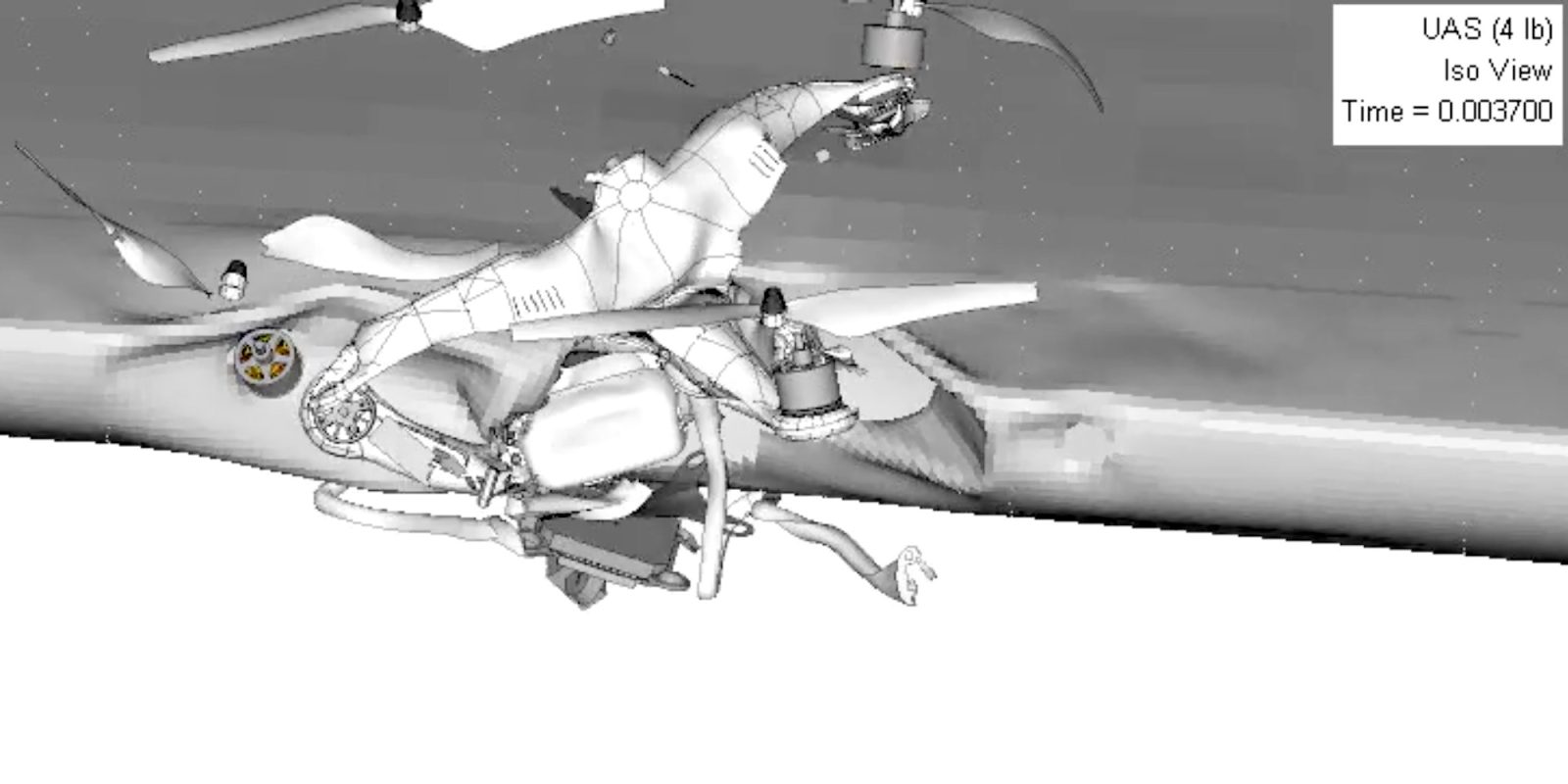 The study used computer models to predict the damage and effects of a drone impact at different areas, such as the wing, windshield, and engine of a passenger airplane and a smaller business jet. In the study, a DJI Phantom 3 and another larger fixed-wing drone from another manufacturer were used. The assumed damage ranged from minimal to very serious.

The speed at the time of the collision. Drones are typically flown at lower altitudes and airplanes when flying at those altitudes fly at much lowers speeds as well. The ASSURE report found that slower speeds correlate with the lowest levels of damage in case of a collision.

Low risk of drone collisions. Millions of drones are already in use all around the world and as of yet, there is only one confirmed case of a drone and manned aircraft collision. The September 2017 collision between a DJI Phantom 4 drone and a U.S. Army helicopter over water near Staten Island, New York. A portion of the drone was recovered from the damaged helicopter, which landed without incident or injury. DJI states that most pilots fly their drones responsibly.

DJI does not point out, however, the large number of near-misses or drone incidents that are happening around the world, for instance in The Netherlands, Argentina, Canada, New Zealand and the UK. Nor does DJI point out the advanced geo-fencing system that they announced at the Aeroscope event in Washington, D.C. DJI said the company will introduce this within the foreseeable future and that takes into account a more accurate 3D-like footprint of an airport’s final approach and take-off areas.

Here is the complete text of DJI’s statement:

DJI, the world’s leader in civilian drones and aerial imaging technology, believes Tuesday’s new report from the Alliance for System Safety of UAS through Research Excellence (ASSURE) on drone collision risks highlights the importance of DJI’s education and technology efforts to help keep drones clear of airplanes. DJI experts are available to discuss the ASSURE report and DJI’s safety efforts.

The ASSURE report (available here) studied a DJI Phantom 3 quadcopter drone and a larger fixed-wing drone made by another company, then used computer models to predict how they would collide with different surfaces of a passenger jet and a business jet. The study found a range of possible impacts on those surfaces, from minimal to serious.

Just like ASSURE’s prior report on ground collisions, this report provides new assurances that the drones being operated today are safe in ways that contradict popular, sensational assumptions. For example, even in a worst-case scenario, ASSURE concluded a quadcopter drone would not penetrate the windshield of these airplanes or cause an uncontained failure if ingested into an airliner’s engine. And at the low altitudes where most drones operate and are often limited by design restrictions, airplanes fly at the slower speeds which ASSURE found correlate with the lowest levels of damage in a collision.

The study confirmed DJI’s consistent position that the smallest drones should be treated differently by regulators because they pose a much lower risk of serious damage in a collision with other aircraft. DJI’s newest popular drones, the Mavic Pro and Spark, weigh much less than the Phantom model studied by ASSURE.

“ASSURE has done a great public service by rigorously analyzing the risks of collisions and providing a scientific basis for future research, product development and regulation,” said Brendan Schulman, DJI Vice President of Policy and Legal Affairs. “Drones provide great benefits to society – even saving lives – and ASSURE’s report shows why the growth of this technology should be guided by facts, not fears.”

ASSURE concluded that drone manufacturers should adopt sense-and-avoid and/or geofencing technologies to reduce the risk of drones colliding with aircraft, which are some of the features already built into DJI’s newest drones. DJI has led the unmanned aircraft systems (UAS) industry in developing creative and effective ways to help ensure drones and their pilots maintain safe separation from passenger aircraft.

“The ASSURE report demonstrates that our industry’s safety efforts should focus on maintaining safe separation between aircraft, so collision data remains a subject for scientific modeling,” said Walter Stockwell, DJI Director of Technical Standards. “Technology and education are key to help drone pilots achieve that goal.”

ASSURE is a Center of Excellence designated by the U.S. Federal Aviation Administration (FAA), which commissioned today’s report. DJI has supplied ASSURE with materials for testing as well as technical expertise upon request since 2016, as part of DJI’s efforts to ensure the UAS industry can rely on high-quality independent research to improve safety standards and performance. DJI played no other role in the report’s preparation or conclusions.

The overwhelming majority of drone pilots want to fly safely and responsibly, and DJI’s tools have helped maintain an admirable safety record for consumer drones. The FAA has made clear that drones can be safely integrated into airspace, and DJI continues to work closely with aviation regulators on smart regulation, technology and education to bring the benefits of drones to the world.

The ASSURE study is the first rigorous scientific effort to understand the potential consequences of a drone collision with a passenger aircraft. A United Kingdom Department for Transport study this summer indicated that most consumer drones pose limited risk to aviation, but the agency refused to release the full testing methodology and results, severely limiting the utility of that study to answer key safety questions and providing no guidance to the industry or to lawmakers about how to improve safety.

With millions of drones in use around the world, only one confirmed collision has ever been reported between a modern civilian drone and an airplane or helicopter. DJI is assisting the U.S. National Transportation Safety Board in an investigation of that September 2017 collision between a DJI Phantom 4 drone and a U.S. Army helicopter over water near Staten Island, New York. A portion of the drone was recovered from the damaged helicopter, which landed without incident or injury.