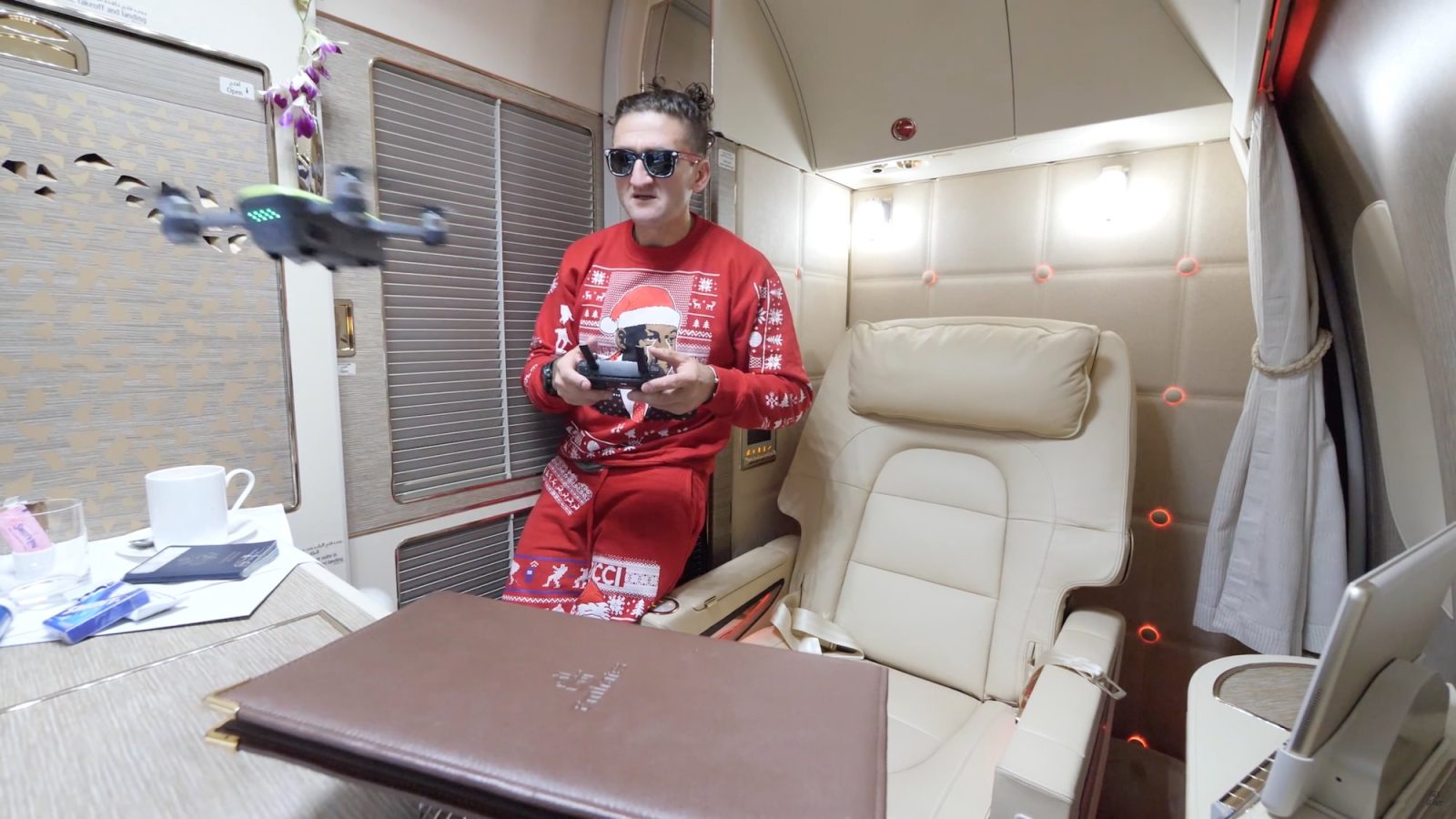 A small ‘hotel room’ on board the airplane

The video starts in the typical Neistat fashion, we join him on his journey through the Brussels Airport as he is about to board the Emirates airplane. During the first so many minutes of the short video, which has been viewed over 4 million times in a matter of days, Neistat explores the small ‘hotel room’ on board the airplane.

Remember, he is traveling in a first class suite and it offers tons of legroom, storage space, large tv screens, great food and very friendly service from the crew. A nice touch of the Emirates First Class Suites are the windows inside the cabins in the middle of the airplane. The ones that do not have any real windows. In an effort to give the passengers at least the feel of having a window seat, Emirates had LCD screens installed that show you what you would have seen through a real window. I thought that was clever.

Anyway, this post is not about the airplane itself or the First Class experience. It is about Casey Neistat, a YouTuber but also a fervent drone pilot who has broken many of the FAA’s rules (flying drones over crowds, beyond line-of-sight and in restricted airspace to name a few) to spice up his videos, flying his Spark drone inside an airplane.

Neistat’s drone flying is not appreciated by everyone

Many of his drone flights took place in and around Neistat’s hometown, New York City. Neistat’s videos are highly entertaining and he has a huge following online. In the drone world, however, many people are not at all pleased with his rule-breaking drone flights. They fear these are accidents waiting to happen and his drone flights may well contribute to the FAA sharpening the rules and regulations for other law-abiding amateur drone pilots.

At some point during the video, we see Neistat sitting in his suite with a DJI Spark mini-drone in front of him. As he starts up the drone, he tells us that:

“I will now attempt to fly my drone inside this airplane.”

The small unmanned aircraft takes off and right away it drifts a little in its flight path. It becomes obvious that there isn’t enough space inside the Emirates suite to fly the DJI Spark. Neistat realizes this as well and he grabs the drone out of the air and shuts it down. The flight only lasted seconds, but it does make for entertaining footage for sure.

Neistat did make reference to the FAA investigating him in one of his videos earlier this year. Apparently, nothing came of it as the FAA did not have enough evidence. This in itself started a whole new discussion as to why some people who break the law do get penalized by the FAA and a repeat offender like Neistat seems to walk away freely.

What do you think about Casey Neistat’s drone flying? Do you support it and think that the rules are too strict or do you view it as irresponsible and potentially dangerous and he should be fined by the FAA?