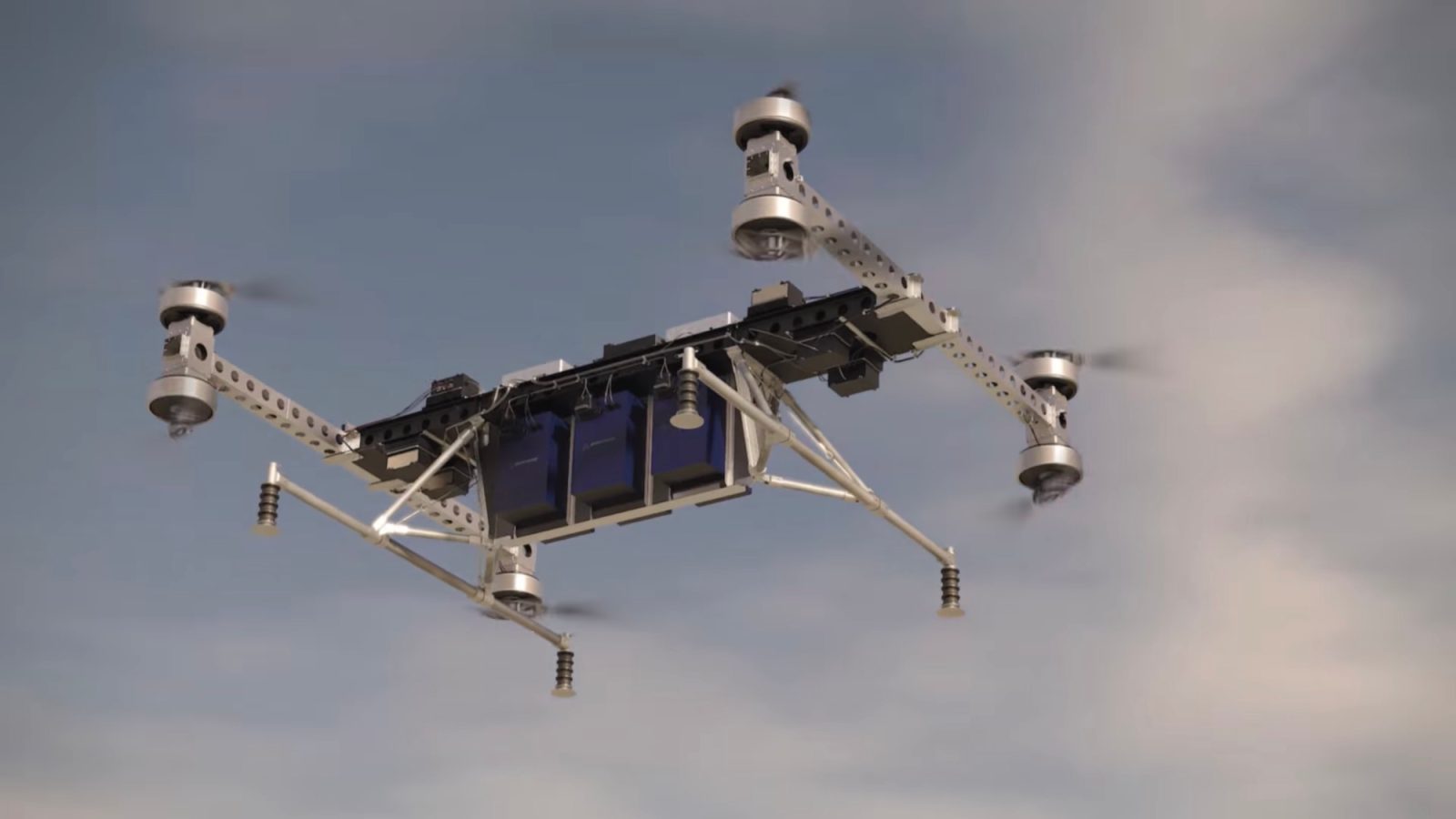 Boeing unveiled an “unmanned electric vertical-takeoff-and-landing (eVTOL) cargo air vehicle (CAV) prototype”, which boils down to a giant cargo carrying drone, capable of airlifting 500 pounds of payload. The aerospace company said it is a prototype for future cargo-carrying unmanned aircraft.

Apart from its load carrying ability, Boeing performed another impressive feat, this prototype was designed and built in three months. Recently it performed its initial test flight at the Boeing research lab in Missouri. On YouTube, Boeing said:

“In less than three months, a team of engineers designed and built the unmanned cargo air vehicle (CAV) prototype. The innovative vehicle will be used to test and evolve Boeing’s autonomous technology for future aerospace vehicles.”

The cargo drone is powered by an electric propulsion system and eight has eight rotors to allow for vertical take of and landing. It weighs 747 pounds (339 kilograms) and is 15 feet long (4.57 meters), 18 feet wide (5.49 meters), and 4 feet tall (1.22 meters). Boeing did not provide any information on range or flight time.

“This flying cargo air vehicle represents another major step in our Boeing eVTOL strategy,” said Boeing chief technology officer Greg Hyslop in a statement. “We have an opportunity to really change air travel and transport, and we’ll look back on this day as a major step in that journey.”

Only four months ago Boeing acquired Aurora Flight Sciences, an aviation and aeronautics research company that has partnered with Uber to develop drone taxis. According to The Verge, Boeing said that the cargo drone development would “complement” the drone taxis that Aurora is developing for Uber.

Drone are getting bigger and more serious, both in the passenger transportation space (drone taxis) as well as in the cargo transportation industry. Boeing is not the only company developing drones with impressive payload carrying ability. Recently we reported on the Russian company ARDN technology that is developing the SYF drone, which is capable of carrying a 400-pound payload for up to eight hours. Then we have UPS, Workhorse, Mercedes-Benz, Amazon, and Google also working on drone deliveries, albeit with much smaller payloads.

In the passenger transportation space, we have Uber/Bell Helicopter and they are not alone. Other competitors include the Volocopter, which had its first flight in Dubai recently. The Ehang 184 personal drone, the Autonomous Passenger drone, and Workhorse’s Surefly taxi drone, that is supposed to be demo-ed for real (no simulator) at CES 2018.

In short, there is a lot of exciting stuff happening in this space. We will keep you posted here on DroneDj with the latest developments. What are your thoughts on the larger drones? Do you see a future for them or are you concerned about drones being misused? Let us know in the comments below.