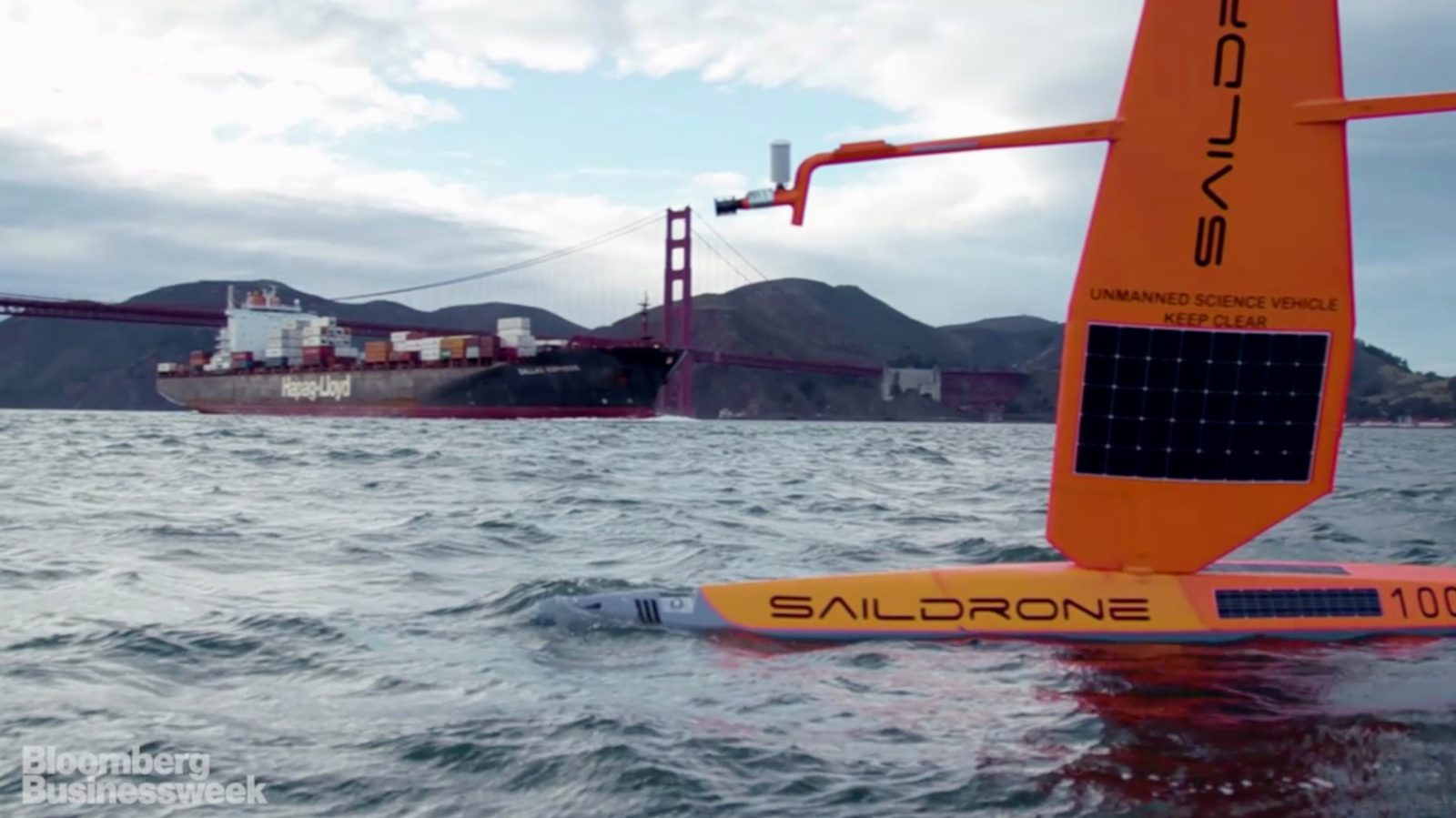 Every spring, in what is one of the world’s largest migrations, thousands of great white sharks swim from along America’s West Coast to an area in the Pacific Ocean that is half-way in between San Diego and Hawaii. The area is about the size of Colorado and is known among marine biologists as the White Shark Cafe. Not much was known as to why the marine predators hang out here or what they are up to. However, this year we finally got some answers as two Saildrones were sent out there to monitor the great whites.

Saildrones are fully autonomous, unmanned marine crafts that are powered by wind and solar. The 23-foot neon-orange vessels are packed with $100,000 worth of batteries, sensors, and electronics that allow them to sail autonomously, be remotely controlled and measure things like, windspeed and direction, salinity, water temperature, current, and a host of other things. Some of the data that these marine drones capture is sent back by satellite, but most of the information is retrieved from the hard disks once the vessels return home.

The two Saildrones that were sent on their way to the White Shark Cafe, a 1,200 mile trip from the Bay Area city of Alameda, arrived early April and began picking up signals from the 37 sharks that researchers had tagged with acoustic transmitters. As the marine drones canvassed the area, they transmitted the data of the sharks’ locations to Stanford marine biologist, Barbara Block, who has studied these sharks for most of her career but never received such a detailed look at their deepwater playground. We now know that the marine predators dive to a depth of around 1,500 feet or more to a layer of the ocean teeming with fish. About the research, Block says:

“We’re talking about a place that is a long way from anywhere, that few people have ever been to. Then I’m sitting in my office, and the images start to appear of the sharks doing dives in these day and night patterns. What I saw was almost unbelievable. This is one of the largest migrations, one of the largest stories, and we don’t know enough about it or about what goes on in the ocean overall. I think this type of technology will help us fill in the gaps at a crucial time for our planet.”

We first reported on the 1,200-pound Saildrones back in November as they offer a far less expensive solution than traditional manned marine research ships. An article from Bloomberg informs us that for instance research ships from the U.S. National Oceanic and Atmospheric Administration (NOAA) cost anywhere from $80 to $150 million to build and another $50,000 to $100,000 per day to operate them. Saildrones, on the other hand, can be rented for $2,500 per day.

So far about 36 Saildrones have been built, but the company, backed by $90 million in venture capital, plans to complete 200 of them by the end of the year. Longer term, the founder of Saildrones, Richard Jenkins, 41, envisions at least 1,000 of the marine drones monitoring the oceans around the globe, 24/7 to provide “salable insight into the environment, weather, fishing, shipping, and oil and gas exploration”. It would require more than $100 million to turn that vision into a reality, but that is still less than a single NOAA research ship. Next year, NOAA plans to have about two dozen Saildrones in the water to monitor the weather and climate change.

If you are interested to learn more about Saildrones, than be sure to read this Bloomberg article, that provides more background information on the company and its founder, Richard Jenkins.