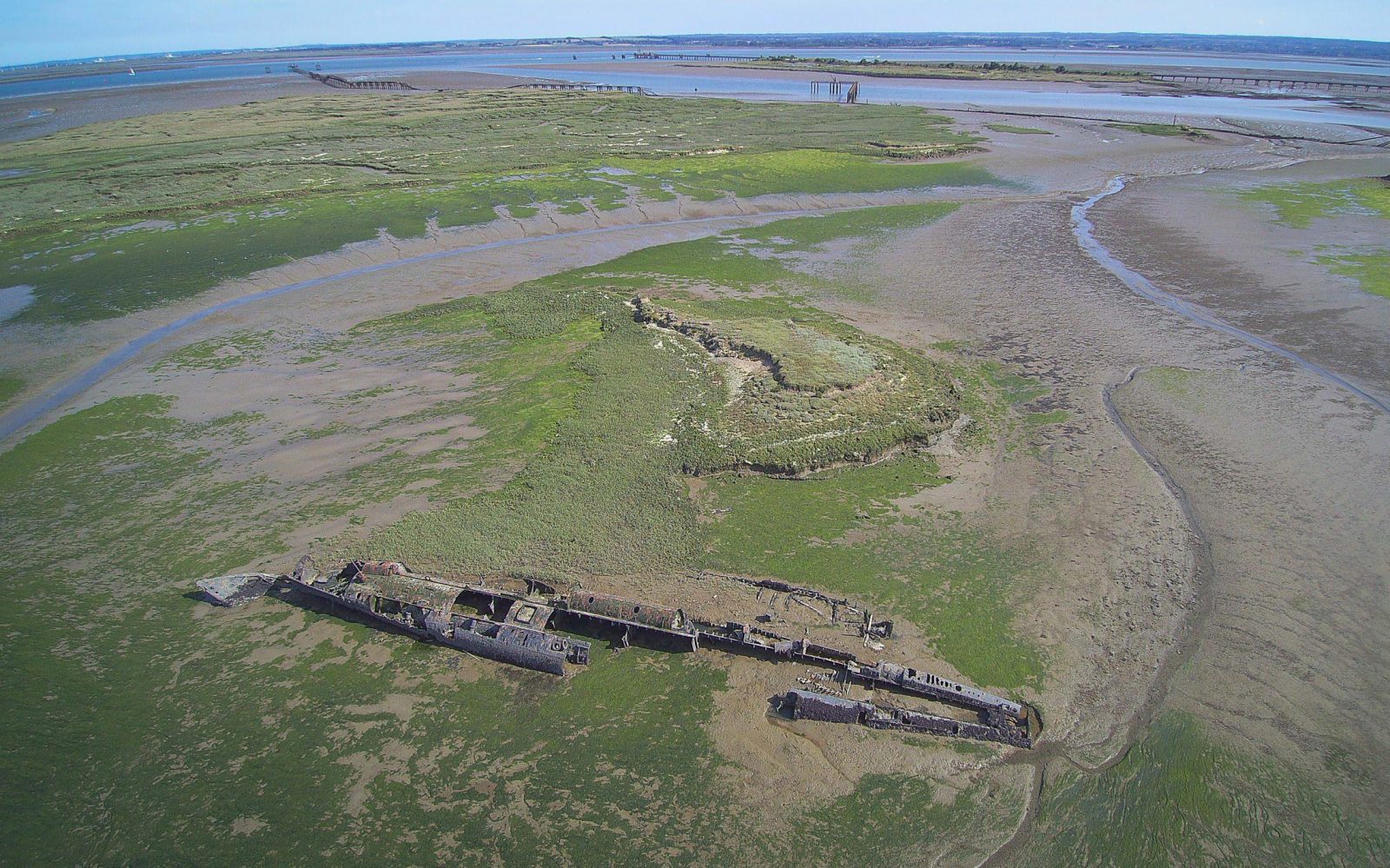 A couple of days ago, drone enthusiast David Eighteen took his Yuneec Typhoon H (not the Plus) to the waterfront of the River Medway and sort of stumbled upon this almost 100-year-old U-boat while flying his drone. David’s hi-res aerial photos and some additional research into this shipwreck make for a very interesting story and it is a great example of how drones can open up a new world that otherwise may go unnoticed.

How did the German U-boat end up in the marshes of Kent?

The almost 100-year-old German U-boat from the First World War was first spotted around 2013 after a big storm had reshaped the mudflats of the River Medway near Humble Bee Creek at Stoke Saltings in England.

After the First World War, many German U-boats were brought up the Thames Estuary to be dismantled and re-purposed. The diesel engines that powered the submarine, for instance, are believed to have ended up at a cement factory. The hulls were typically scrapped.

According to The Telegraph,  this particular U-boat is thought to be a UB 122, and according to a team of researchers it was captained by:

“Oberleutnant zur See Alexander Magnus, had surrendered at the end of the war, and been taken to Britain. It had later been towed up the Medway to Halling, where its diesel engines were removed and fitted at a local cement works. In 1921, it was being taken back down the river, towards the Thames Estuary to be further dismantled, when its tow broke and it was swept ashore, coming to rest in Humble Bee Creek, near to the Isle of Grain, where it remains.”

Back when it was launched in 1918 the UB 122 was one of the most advanced submarines of its time. Since it was a Type B III, coastal patrol submarine, it would have been outfitted with 10 torpedoes and a crew of 34. During the war the German submarines operated in groups, so-called ‘Wolfpacks’ and were very effective, almost bringing the UK to its knees in 1917. U-boats were responsible for sinking around 5,000 ships in total.

For almost a century now this particular U-boat in the marshes of Kent, has been rusting away in a remote part of the Kent marshes. You can get to it with a canoe or perhaps a hoovercraft but doing so, is considered to be somewhat dangerous. Only on very low tides does the hull get completely exposed.

To get a closer look, David did not have to risk anything other than his drone, that was supplied by Yuneec UK. And by sharing his photos and story on DroneDJ, he is providing others with a close-up look of this historic vessel.

Actually, not too long ago we featured a similar story of a Civil-War era shipwreck of the coast of North Carolina that got many people interested in the history of that ship.

Photos of the U Boat

See it on Google Maps