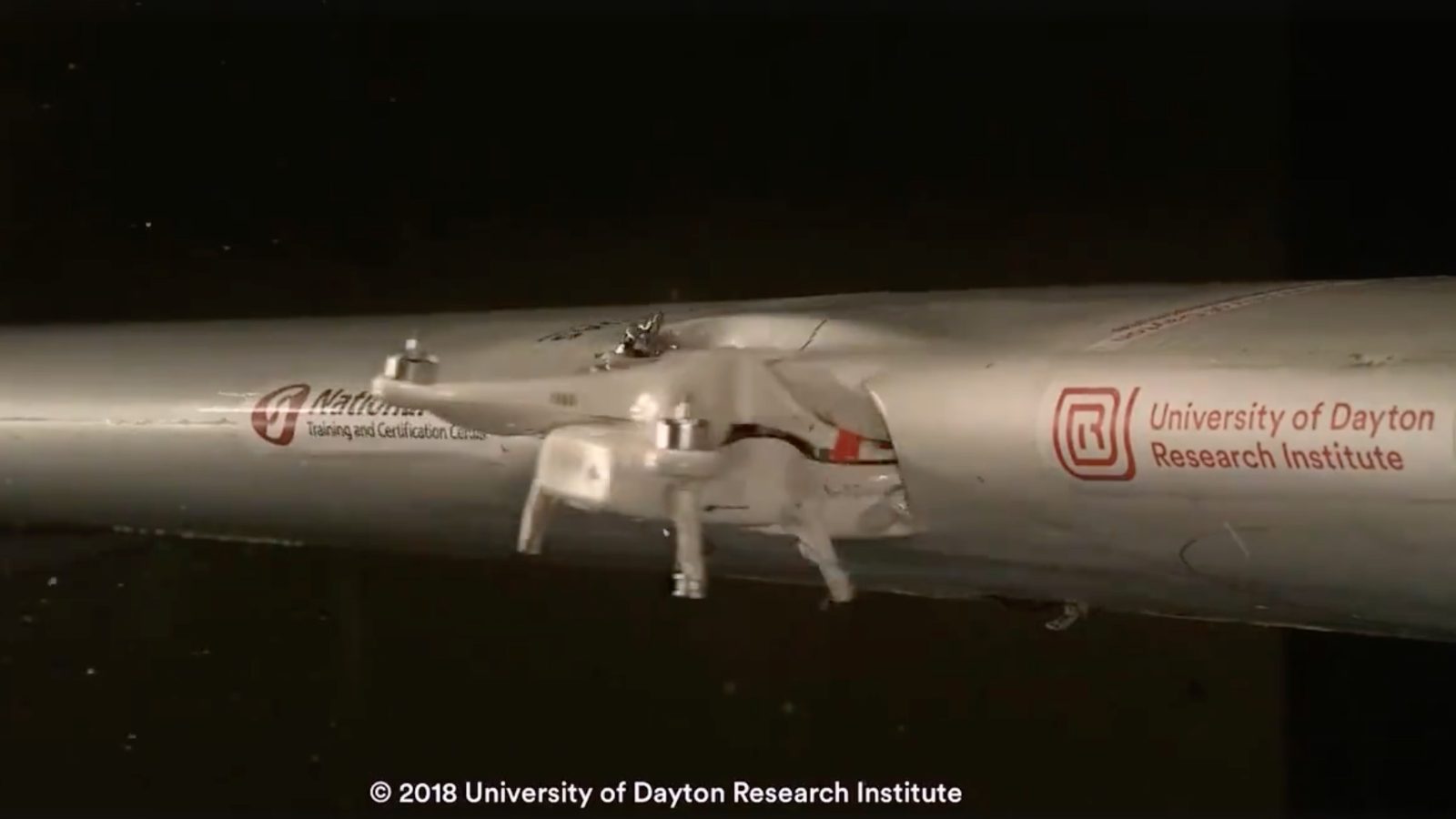 During the last two weeks, the video we reported on earlier, in which a DJI Phantom 2 is ‘fired’ at an airplane wing of a Mooney M20 aircraft during tests performed at the University of Dayton Research Institute’s Impact Physics Lab was picked up by major news channels, including CNN. The tests were designed to mimic a midair collision at 238 mph between a drone and an aircraft, however many people have pointed out that the test did not resemble a real-life situation and made it seem that drones are more dangerous than they really are. Now, DJI has responded to the test video as well and demands the video to be taken down. See their official press release below.

October 19, 2018 – DJI, the world’s leader in civilian drones and aerial imaging technology, today demanded the University of Dayton Research Institute (UDRI) withdraw a misleading video and blog post which claim to depict a collision between a DJI Phantom 2 drone and the wing of a small airplane.

UDRI staged its video to create a scenario inconceivable in real life, at a higher speed than the combined maximum speed of the drone and airplane, which is also faster than U.S. Federal Aviation Administration (FAA) testing guidelines. UDRI has not disclosed its testing methodology or the resulting data, and while it acknowledged that a similar test with a simulated bird caused “more apparent damage,” it has only promoted the video showing damage from a DJI drone.

In a letter to the lead researcher involved in the video, DJI’s Vice President of Policy & Legal Affairs said UDRI “recklessly created and promoted a video that falsely claims to depict a dangerous condition posed by one of our products. … Your public comments deliberately present an entirely improbable, if not impossible, event as a commonplace risk routinely faced by airplane pilots.”

I represent DJI, the world’s largest manufacturer of small unmanned aircraft systems, commonly known as drones. We lead the industry in developing systems to help ensure drones continue to safely share the airspace with traditional air traffic. DJI takes aviation safety seriously. It is integral to who we are as an organization and as aviation professionals. We have proactively incorporated dozens of safety features into our products, including altitude limitation, airport geofencing, return-to-home failsafe systems, computer vision anti-collision sensors, and pilot knowledge testing. We also support research professionals who work alongside the industry and regulators to provide academic grounding to aviation safety efforts.

It is thus distressing to see how the University of Dayton Research Institute has recklessly created and promoted a video that falsely claims to depict a dangerous condition posed by one of our products. Your “Risk in the Sky?” video, blog post and media tour created a collision scenario between a drone and an airplane wing that is simply inconceivable in real life:

• Your video assumes a Mooney M20 light aircraft is flying at its maximum possible speed of 200 mph, and encounters a drone apparently flying faster than its maximum possible speed of 33.5 mph. The plane could only achieve such speed at full cruise, typically more than a mile above ground. At the altitudes where that plane would conceivably encounter a Phantom drone, it would fly less than half as fast — generating less than one-fourth of the collision energy.

• Your video was created contrary to established U.S. Federal Aviation Administration (FAA) crash test parameters, which assume a bird striking an airplane at its sea-level cruising speed — which is typically 161 mph to 184 mph for Mooney M20. Your video deliberately created a more damaging scenario, and was widely cited as evidence for what could happen to a large commercial jet — even though the Mooney M20 is a small plane with four seats.

• Your video was not created as part of a legitimate scientific query, with little description of your testing methodology and no disclosure of data generated during the test. Your blog post describes a similar test performed with a simulated bird that caused “more apparent damage,” but your decision not to post or promote that video indicates your bias toward sowing fear. This contrasts with the reputable research performed by the Alliance for System Safety of UAS through Research Excellence (ASSURE), the FAA Center of Excellence for Unmanned Aircraft Systems, which meticulously tests a variety of impact scenarios in order to provide the public, the FAA, and the UAS industry, with supportable conclusions about risk. You have done nothing of the sort.

Given UDRI’s wide-ranging publicity efforts in print, broadcast and online media, it seems clear that your misleading video and incendiary blog post seem designed to generate paid research work for UDRI at the expense of the reputation of drone technology broadly, and DJI’s products specifically. Your public comments deliberately present an entirely improbable, if not impossible, event as a commonplace risk routinely faced by airplane pilots.

To elaborate on the points outlined above, the impact velocity tested, 238 mph, far exceeds any conceivable collision speed between a Mooney M20 and a DJI Phantom 2. The M20J Pilots Operating Handbook lists the maximum structural speed of a Mooney 20 at 174 knots, which is 200 mph. Cruise speed will typically be 140-160 knots (161-184 mph), more than a mile above ground. The Phantom, and our other drones, have built-in altitude limitation features. Thus in the altitudes no higher than several hundred feet above ground where a drone is likely to operate, the Mooney M20 would be taking off or landing at speeds between 70-88 knots (81-101 mph).

As for the other aircraft in this scenario, DJI has not manufactured the Phantom 2 drone for years, but its published specifications indicate a top speed of 15 meters/second, or 33.5 mph. In other words, it is virtually impossible for these two aircraft to encounter each other at the speed of your test. Given that kinetic energy, and therefore resulting damage, increases by the square of velocity, the arbitrary increase in your test velocity results in dramatically more damage.

More to the point, a test deliberately designed to generate the worst conceivable outcome is contrary to the FAA’s established testing parameters, which seek to measure the risk that an aircraft is most likely to encounter. The relevant Federal Aviation Regulation states an airplane must be capable of successfully completing a flight despite striking a bird at the equivalent of the aircraft’s cruise speed measured at sea level, which as stated above is 161-184 mph for the Mooney M20. Your test was thus performed at a speed 54 mph to 77 mph faster than a responsible collision test would require, creating a case that is unrealistic and damaging to the reputation of our company’s products.

Reputable testing institutions have meticulously tested a variety of impact scenarios in order to provide the public, the FAA, and the drone industry with supportable conclusions about risk. ASSURE has set the standard for this work by releasing detailed reports with careful documentation of their testing methodology and hundreds of pages of data. By contrast, the limited information available about your demonstration prevents anyone from determining other flaws in your methodology and conclusions.

Your video and blog post have been promoted in media around the world, yet nowhere in any of your print or television appearances have you qualified the limited and unrealistic nature of your test. As a safety researcher, surely you understand the detrimental impact on public perception when purported scientific research is not presented with appropriate caveats and with an opportunity for peer review and alternative views.

Unbalanced, agenda-driven research does substantial harm to our industry and to our company. Policymakers at all levels of government have responded to sensational media coverage by proposing and enacting new restrictions on drone ownership and use. These limitations prevent people and businesses from using drones safely for beneficial purposes, such as performing hazardous inspections or finding missing people. At least 195 people around the world have been rescued from peril by drones, many of them saved by small drones such as DJI Phantoms. By misleading the public and promoting fear about drones, you are undermining their benefits and encouraging restrictions on their lifesaving uses.

We respectfully demand that you withdraw your research, remove the alarmist video from circulation, and issue a corrective statement to the public and to all of the media outlets you have appeared in, acknowledging that the configuration of the test was invalid given the flight envelopes of the two aircraft tested, FAA testing standards, and the limited value of a single test.