Even small drones, like a DJI Phantom, pose a risk to manned aircraft [Update: video] 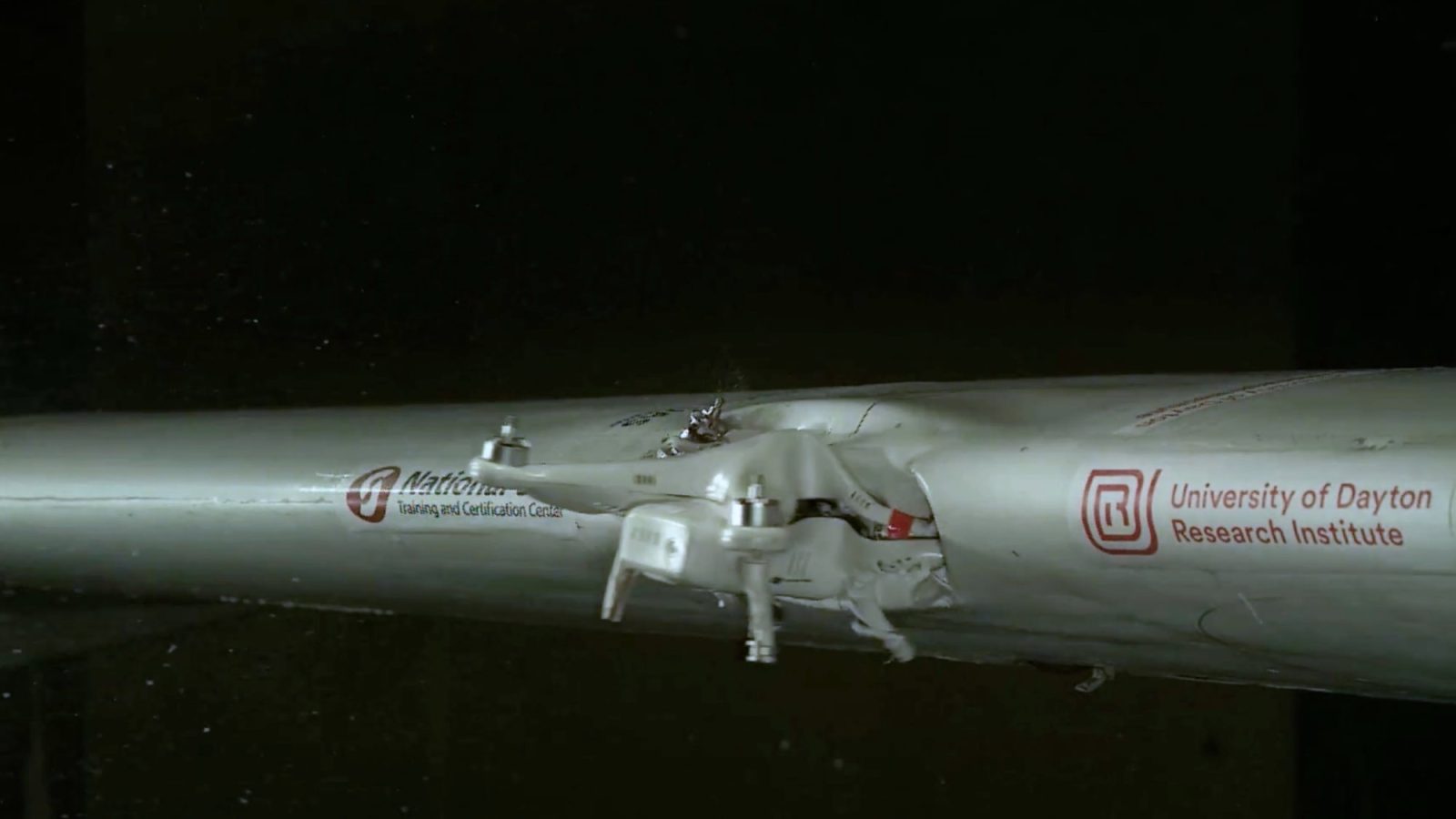 Tests performed at the University of Dayton Research Institute’s Impact Physics Lab show that even the impact of a small drone, like a DJI Phantom can have severe consequences. The tests were designed to mimic a midair collision at 238 mph. A 2.1-pound DJI Phantom 2 drone was launched into the wing of a Mooney M20 aircraft. As you can see in the video below, the drone did not shatter upon impact but tore open the leading edge of the wing. It entered the wing’s structure and damaged the main spar, posing a risk to manned aircraft.

10/8/18: The article was updated with a longer version video about the test.

Kevin Poormon, group leader for impact physics at UDRI said about the drone collision that:

“While the quadcopter broke apart, its energy and mass hung together to create significant damage to the wing.”

The results of the test and the video were presented during the fourth annual Unmanned Systems Academic Summit, held in August at Sinclair College’s Conference Center and its National UAS Training and Certification Center in Dayton. Poorman’s team regularly performs bird-strike tests of airplane structures, such as engines, wings, and windshields.

More drones in the air increases risk for manned aircraft

Poorman said that with an increasing number of people flying drones, the risk of a catastrophic event rises as well. He has performed bird-strike testing for more than four decades and is very familiar with the kind of damage a bird can do to an airplane. Drones are similar in weight to some birds, according to Poorman and he and his team have been watching the reports of near-misses with growing concern.

Last year, as we reported on DroneDJ, a DJI Phantom struck a military Blackhawk helicopter over Staten Island. The drone pilot was not fully aware of the rules that apply to flying unmanned aircraft and flew his drone beyond-visual-line-of-sight (BVLOS). Luckily, the helicopter only sustained minor damage and nobody was injured but Poormon, whose team has launched individual drone batteries, cameras, and motors at metal panels warns that:

“It is only a matter of time before a drone strike causes more significant damage to a manned aircraft.” He continued to say that, “we wanted to help the aviation community and the drone industry understand the dangers that even recreational drones can pose to manned aircraft before a significant event occurs. But there is little to no data about the type of damage UAVs can do, and the information that is available has come only from modeling and simulations. We knew the only way to really study and understand the problem was to create an actual collision, and we’re fully equipped to do that.”

Poormon’s team has worked together with the Sinclair College National UAS Training and Certification Center for guidance on unmanned aerial systems. For instance, Sinclair provided the DJI Phantom drones for testing as well as the aircraft wing to serve as a target. Poormon said:

“We’re fortunate to be in close proximity to Sinclair’s nationally renowned UAS Center. We’re experts on bird strikes, but Sinclair’s team provided valuable insight on how these systems are being used and helped us determine the best models for testing.”

During the tests, the team fired both a DJI Phantom 2 drone and a similarly weighted gel-bird at the wing to compare the results. The ‘bird’ strike created more apparent damage but the Phantom 2 penetrated deeper into the wing structure and damaged the main spar. Something that the bird did not do.

Need for education and drone regulations

Additional tests have been planned by Poormon’s team to investigate the damage larger drones would cause to windscreens and engines in case of a collision. The results of this first test will hopefully bring attention to the manned and unmanned aviation communities about the need for educating safe drone flying as drone regulations. Poormon said that:

“It’s not practical to regulate manned air vehicles to try to avoid collisions with a quickly growing population of drones, but it is practical—and we believe it’s necessary—to regulate UAV operation. There are other factors that could be looked at related to UAV production that could help enhance safety, such as building drones to be more frangible—meaning they’ll shatter more easily on impact—or keeping them under a certain weight limit. The shipping industry is already investigating ways to use drones for package delivery. That would require larger and heavier drones which, when combined with the weight of a package, could easily outweigh a Canada goose, known to do significant damage to aircraft.”

The executive director and chief scientist at Sinclair’s National UAS Training and Certification Center, Andrew Shepherd said that the emergence of drones in the civil and commercial markets will bring significant economic benefits. In some markets, this is already visible.

“This type of testing shows that we recognized the potential risks and are seeking to better understand them and positively influence policy and operations to mitigate possible dangers,” Shepherd said. “Collaborating with UDRI’s leading experts and world-class testing facilities helps us fulfill our mission to not only advance technologies for unmanned aerial systems but to make the skies safer for manned and unmanned vehicles alike.”

Poorman is not aware of any other research team in the nation conducting similar tests with controlled drone strikes on aero-structures.