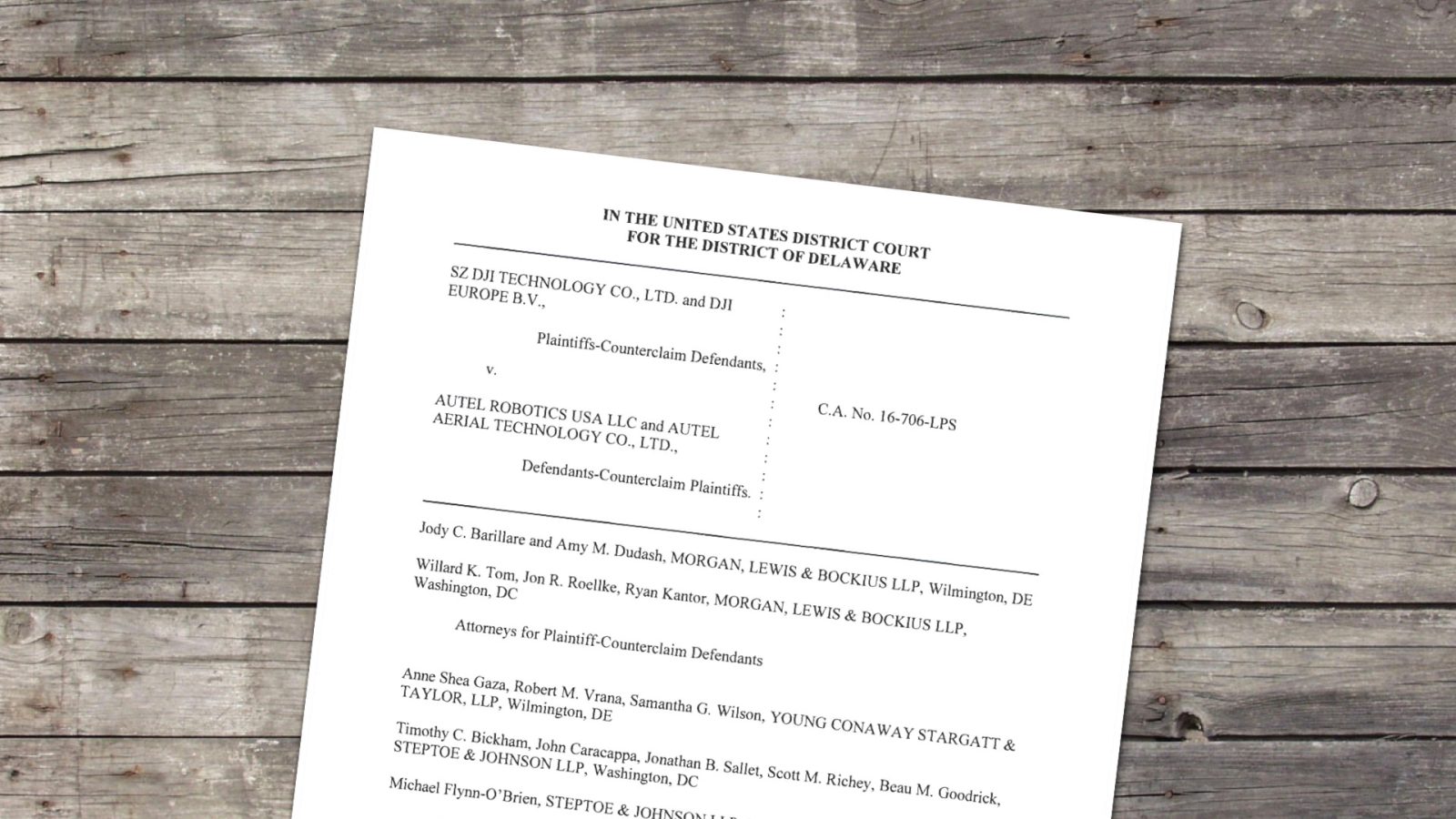 The legal battle between Autel and DJI goes back to August 11th, 2016 when DJI filed a suit against Autel for patent infringement relating to drone technology and operation. Autel responded by finding an amended answer to DJI’s complaint on May 23rd, 2018 that included counterclaims for monopolization in violation of the Sherman Act, attempted monopolization in violation of the Sherman Act, predatory pricing in violation of sections 17043 and 17044 of the California Unfair Practices Act, and predatory pricing in violation of section 481-3 of the Hawaii Unfair Practices Act. On June 29th of 2018, DJI moved to dismiss these antitrust counterclaims. Autel, in turn, responded by filing a second amended answer mooting the earlier motion. DJI then filed the present motion on September 14th, 2018.

Autel has claimed the following:

…that DJI has captured the majority of the growth of this market [the prosumer drone market], fueling its monopoly power. Autel further alleges that using this market power, ” DJI has repeatedly engaged in predatory pricing to blunt the advance of new competitors and ultimately drive them out of the prosumer drone market entirely or, at a minimum, to its fringes. [N]early a dozen companies have attempted to bring new and better ‘prosumer’ drones to American consumers … [b]ut each time DJI has perceived a new threat, DJI has used its dominant market share to maintain and extend its monopoly by predatorily cutting its prices, below cost, to undercut the advent of the competitor drone.” Autel describes ” a continuing pattern of DJI’s anticompetitive conduct,” whereby DJI tactically lowers its price below cost to drive out each new competitor that enters.

Of course DJI does not agree with the above description of their businesses practices. The company states that their success stems from:

” several key advantages over its competitors,” namely ” the largest research and development team in the industry with a state-of-the-art R&D infrastructure” and a ” manufacturing facility in Shenzhen, China … with direct access to the best supply chain of electronic components.”

Furthermore, DJI states that despite its large market share the company does not have Monopoly power as claimed by Autel. The Chinese drone maker says that:

“as many as a dozen companies (including Autel) introduced new products to the market over the past few years at prices comparable to and often lower than those offered by DJI. Thus, according to Autel’ s own allegations, DJI’ s years of alleged predatory pricing practices did nothing to deter a steady onslaught of new and persistent competition.”

DJI: Autel’s claims are nothing more than speculation

In response to Autel’s allegations of below-cost pricing, DJI claims that these are “nothing more than speculation.” DJI also points out that Autel “does not, for example, identify any of DJI’s advertised prices, does not identify any prices offered by DJI resellers, and does not identify any transactions in which a purchaser actually paid the prices alleged.”

Autel’s claims of DJI’s below cost-pricing originate from a document that Autel obtained through the discovery process on the pending patent claims. The accounting document shows DJI’s revenue, cost, gross profit, and quantity of drones sold by DJI for each month in 2016.

The District Court of Delaware found that:

“Autel does not sufficiently and plausibly plead that DJI priced its prosumer drones below costs.”

Actually, Autel’s reasoning behind their predatory pricing claims is deeply flawed and is explained in detail in the opinion:

Autel’s allegations “are not based on the prices DJI actually charged for the drones it sold in a given month.” In fact, ” Autel does not identify any of DJI’ s advertised prices, nor any of the prices advertised by any of DJI’ s many resellers, nor any actual transaction prices.” Instead, Autel merely takes the DJI accounting document it obtained in patent-related discovery, divides revenue by quantity, and alleges the resulting figure to be the monthly price. Autel alleges nothing to plausibly show that this is the method DJI uses to determine price or that Autel’s resulting figures are in any way representative of DJI’ s actual prices. As DJI points out, Autel’ s method does not account for ” among other things, refunds and returns on products that were sold in other months.” As DJI also argues, ” the document records negative ‘revenue’ in numerous months, which implies – using the math that Autel uses to derive ‘price’ – that DJI in those months must have paid its customers to take its drones. “

Judge Stark points out that the Supreme Court has expressly cautioned against allowing antitrust claims from proceeding if the allegations, such as in Autel’s case are inadequate.

” [C]utting prices in order to increase business often is the very essence of competition. Thus, mistaken inferences in cases such as this one are especially costly, because they chill the very conduct the antitrust laws are designed to protect.”

The judge continues to say that:

“Even if DJI’s pricing drove out competitors, this does not constitute a plausible allegation that it was DJI’s below-cost predatory pricing that caused others to fail.”

The Court of Delaware concludes

The Court agrees with DJI:

” [A]ll of the/acts alleged in the Counterclaim (as opposed to Autel’s conclusory assertions) are fully consistent with robust competition in a growing market, including allegedly declining prices, increasing output, product innovation, and repeated new entry. Because there is no plausibly alleged anticompetitive conduct, Autel cannot satisfy the requirements for stating a predatory pricing claim under federal or state antitrust law.”

“Having failed to allege a below-cost price, or other facts demonstrating that DJI sold presumer drones in a predatory manner, Autel’s antitrust counterclaims, both federal and state, will be dismissed.”

The legal battle between DJI and Autel has been ongoing since one of DJI’s engineers had moved over to Autel a few years ago. The engineer had brought with him a treasure of knowledge and insight of DJI’s inner-workings and planned products.

Will the dismissal of Autel’s claims now mark the end of the legal issues between the two drone makers? Probably not. However, you have to wonder how much money, time and energy Autel can reasonably throw at fighting a legal battle with industry giant, DJI.

What do you think about the ongoing legal battle between DJI and Autel? Do you think that Autel’s resources would be better spent on product development and running the company? Or, do you applaud them for taking on the industry giant, DJI?

Let us know in the comments below.