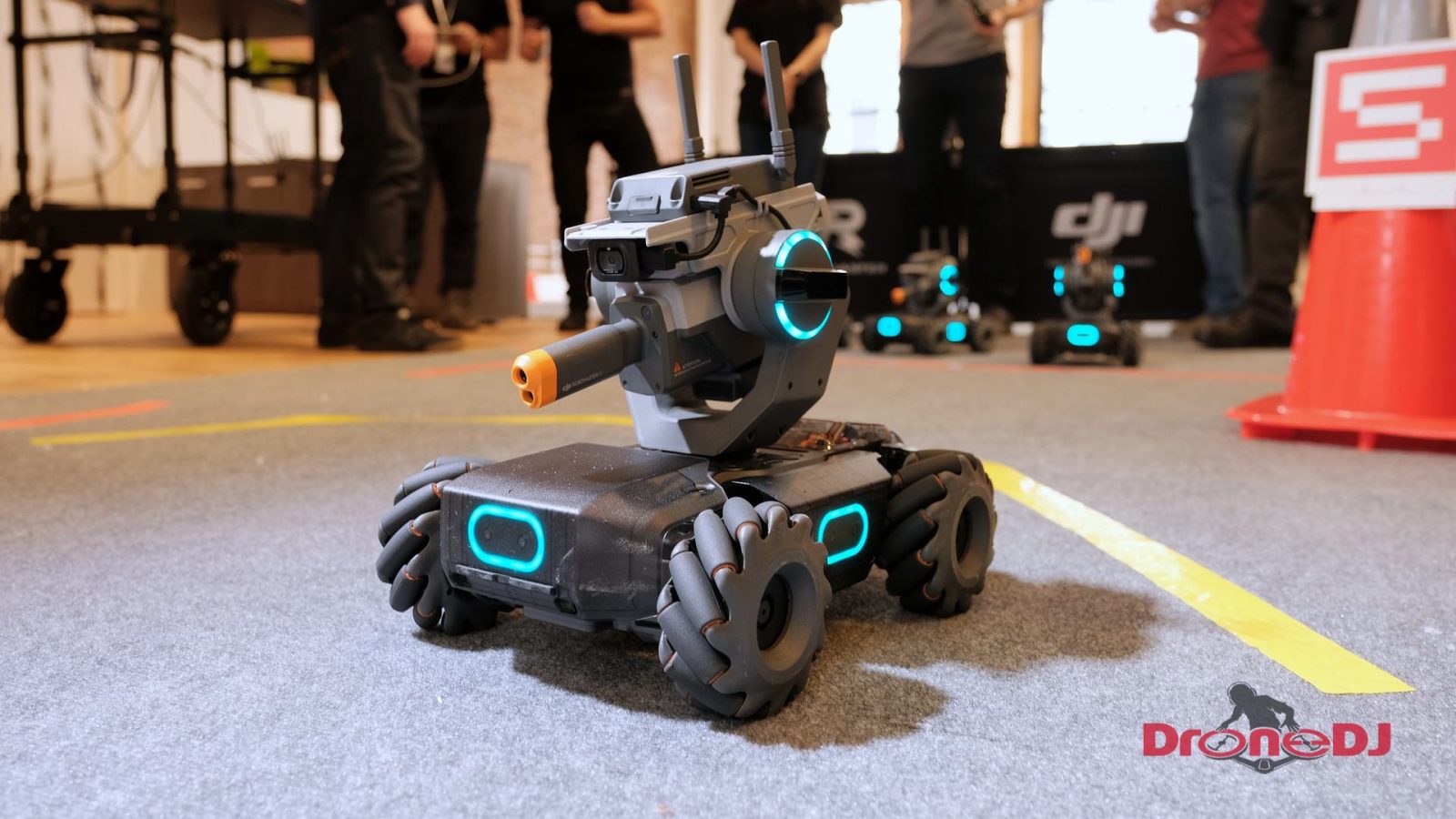 Today, DJI releases its latest product, the DJI RoboMaster S1. An educational robot for techies of all ages. We had the change to play around with it in DJI’s offices in NYC last Friday and these things are a lot of fun! First off, check out those wheels. These guys spin, drift and move in any direction you want. The can also shoot infrared lasers and beads. So yes, you can play your own version of RoboWars with your friends and family. You can build them yourself. Fight against each other. Race each other, and program the S1. It comes with sensing technology and has a camera for FPV mode. The DJI RoboMaster S1 is priced at $499 and is available at the official DJI online store and official resellers as of tomorrow. I know it is not a drone, but you have to give DJI credit for bringing this awesome robot to the market!

Today DJI introduces the new DJI RoboMaster S1, which btw was first shown in this image about one year ago. DJI calls the RoboMaster S1 an advanced educational robot for tech enthusiasts of all ages, that combines advanced hardware, comprehensive sensing, and programmable modes. And (most importantly?) it shoots!

Btw – The non-toxic gel beads are made of composite material and must be soaked in water to soften them before use. Each S1 purchase includes safety goggles.

When you buy the DJI RoboMaster S1 you have to assemble the robot yourself (DJI includes all the tools), which they told me is a fun and educational project. It shouldn’t take too long and it didn’t seem too technical based on what I have seen. I think many techies will get a kick out of this. 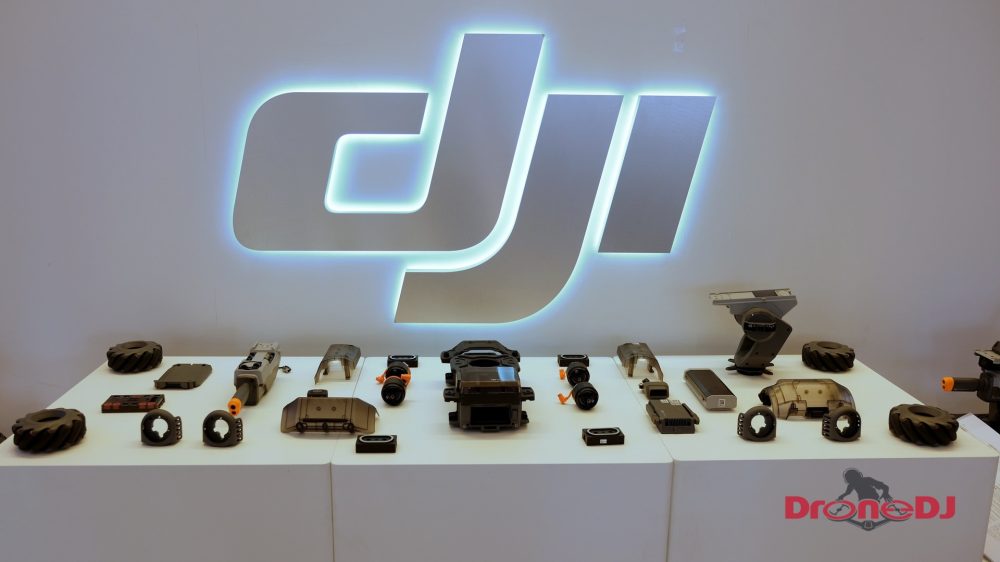 The DJI RoboMaster S1 (Step 1) is meant to introduce people to the fun and possibilities of robotic technology. The robot is said to have been a special project for DJI’s founder and CEO, Frank Wang.

“DJI is powered by passionate engineers with the continued desire to push the boundaries of technology,” said Frank Wang. “Passion is vital but so is the opportunity to learn and engage with technology at an early age. We developed the RoboMaster S1 with the next generation of innovators in mind, making robotics and programming not just more accessible but also an entertaining and academic experience.”

Personally, I was really impressed with the technology in the wheels. The so-called Mecanum wheels spin forwards and backwards but as you can see in the photos they have 12 rollers integrated into them. These allow the DJI RoboMaster S1 to essentially move in any direction and make them very agile and maneuverable. A feature that will come in very handy when you’re trying to avoid enemy fire. The DJI RoboMaster S1 features very torque brushless motors that will get the robot up to its 8 mph max speed quickly. 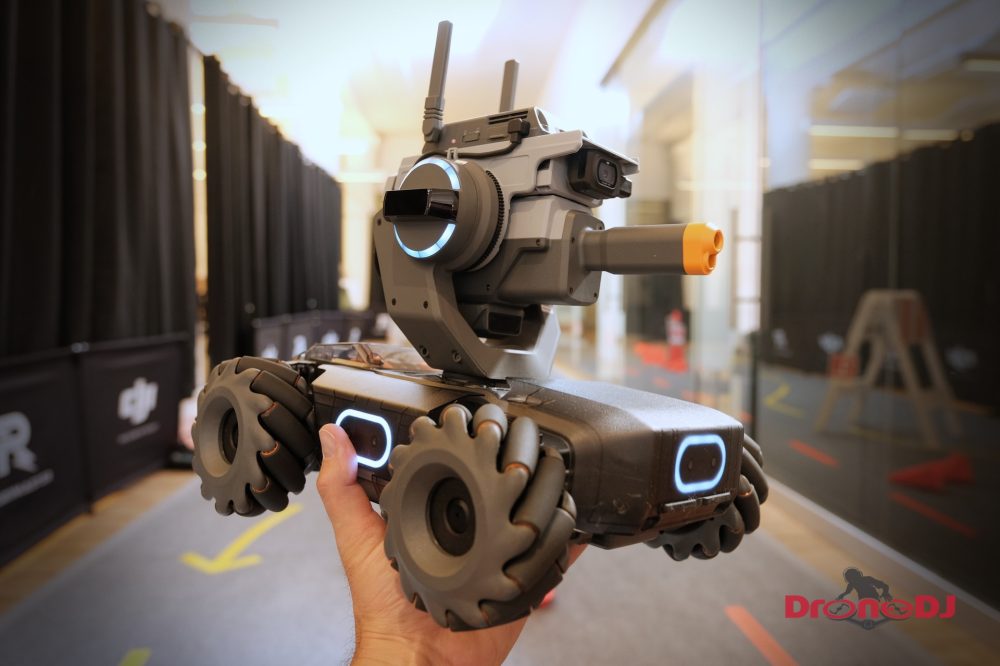 Apart from playing, racing and engaging into battle, you can also program the DJI RoboMaster S1 using Python or Scratch. In DJI’s offices, they had one of the rovers follow a line around an obstacle course.

The DJI RoboMaster S1 can be controlled directly through your smartphone or tablet, or with a separate remote controller. The RC provides one stick which makes it so much easier to control the robot during a race or a battle, I’ve found.

To make the tech accessible for newcomers and tech enthusiasts, DJI has made a dedicated RoboMaster app with easy to navigate menus, tutorials and programming options. There advanced features for users who are a little more tech savvy and have some experience with AI, engineering and robotics.

The DJI RoboMaster S1 is equipped with 31 sensors (!) that will help the device to map the world around it. Six sensors on its body armor will tell you when you have been hit during battles. The robot also features a first-person view (FPV) camera with a direct, stabilized, live video feed to the RoboMaster app on your smartphone or tablet. 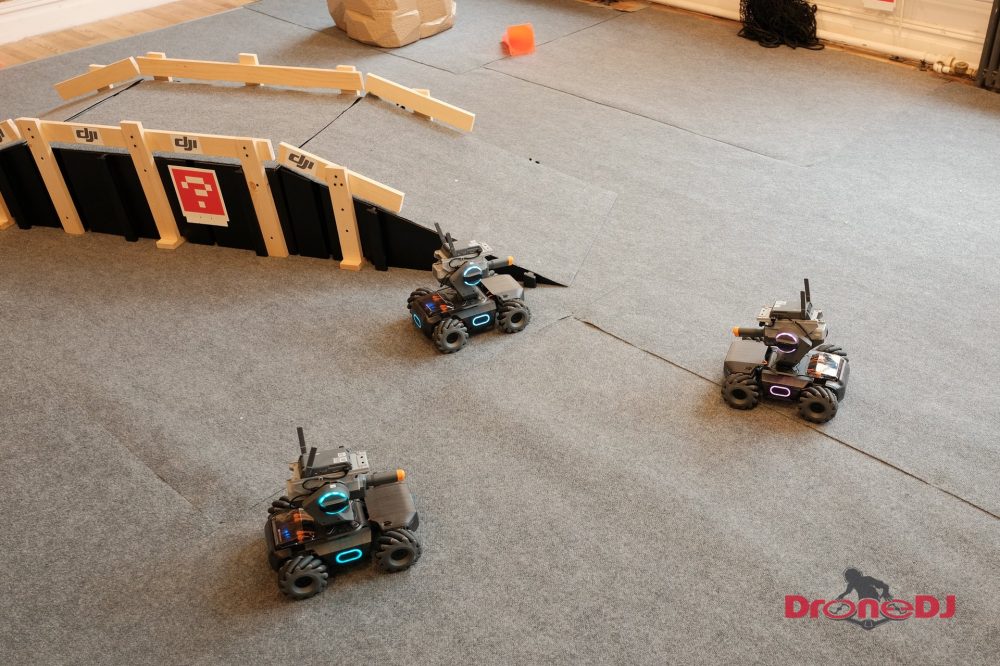 The DJI RoboMaster S1 features a mechanical gimbal with an infrared laser gun that also shoots non-toxic gel bead. It is limited in launching rate and angle to keep things safe for bystanders but it shoots more than fast and aggressive enough to create a sense of battle when engaging with others. During the sneak peek at DJI, we had the change to both race and battle against each other and it was a lot of fun!

“Interactive and Entertaining Modes Inspired by the standard robots featured in DJI’s international RoboMaster Robotics Competition, the S1 features several fun and interactive competition modes. Solo modes include Target Practice and Target Race, where users must scan preset Vision Markers. Multiplayer Battle modes include Race and Free-for-All. In Race mode, users race S1s to scan numbered Vision Markers in the right sequence, and the player who completes the course fastest wins. In Free-for-All mode, players battle using either gel beads or infrared beams. To add even more excitement, the multiplayer battle mode has four Mystery Bonuses that players can use against their opponents: Dizziness, Electromagnetic Interference, Extreme Speed, and Invincibility.”

With the FPV camera and ‘machine vision technology,’ the DJI RoboMaster S1 can identify different objects automatically. For instance, during our race, we had to ‘scan’ numbers and symbols to collect points. It also receives signals from other S1 robots so you’ll know when you’re being hit.

Learning through fun and play

By using Scratch 3.0 or Phyton, you can program the DJI RoboMaster S1 to perform unique functions that determine how it moves or the efficiency and optimizing the torque of the four wheels. You can even program your own custom skills for the S1 so that when during battle when you get shot from behind the S1 will automatically turn around and counter-attack your opponent.

In the RoboMaster app, there is a “Road to Mastery” course built in that educates users on the programming languages. Additionally, “RoboAcademy” offers informative video tutorials and programming guides to introduce robotics and coding. DJI will update these courses and add new ones over time.

DJI started with the RoboMaster competition in 2013, which has since grown tremendously. With the DJI RoboMaster S1. the company makes the next step in making robotic technology available to a larger audience. DJI will partner with schools, robotics clubs, organizations, and others to expand its presence in the field. In August of 2019, DJI will also host the first RoboMaster S1 Challenge during the RoboMaster finals in Shenzhen, China.

DJI believes that technology and robotics are best learned when it is fun and there is play-time involved. It seems that with the DJI RoboMaster S1 they have made a very good effort.

DJI accidentally made the accessories available online prior to the official release. Here they are:

Starting June 12, the RoboMaster S1 will be available for purchase for the retail price of $499. A “PlayMore Kit,” which includes the dedicated controller, additional gel beads, one battery, and a gel bead container, will be available at a to-be-announced date.

For more information on all of the features and capabilities of the RoboMaster S1, please visit: https://www.dji.com/robomaster-s1

The DJI RoboMaster S1 will only be available in the US, Japan, and mainland China

We will be getting our DJI Robo Master S1 on Thursday so stay tuned for a comprehensive review on DroneDJ soon! 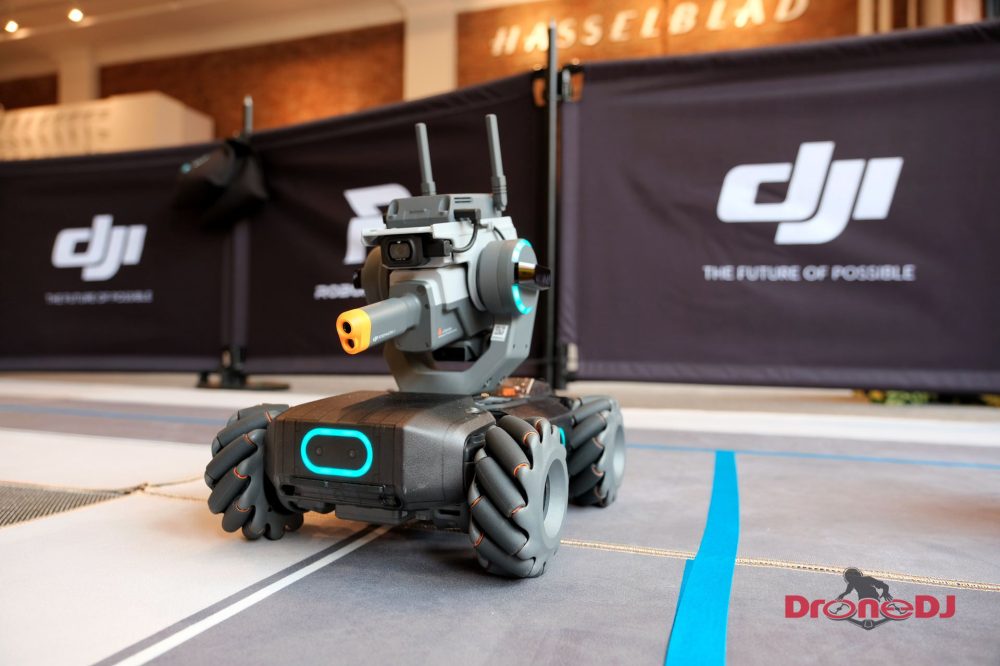 What do you think about the DJI RoboMaster S1? Let us know in the comments below.