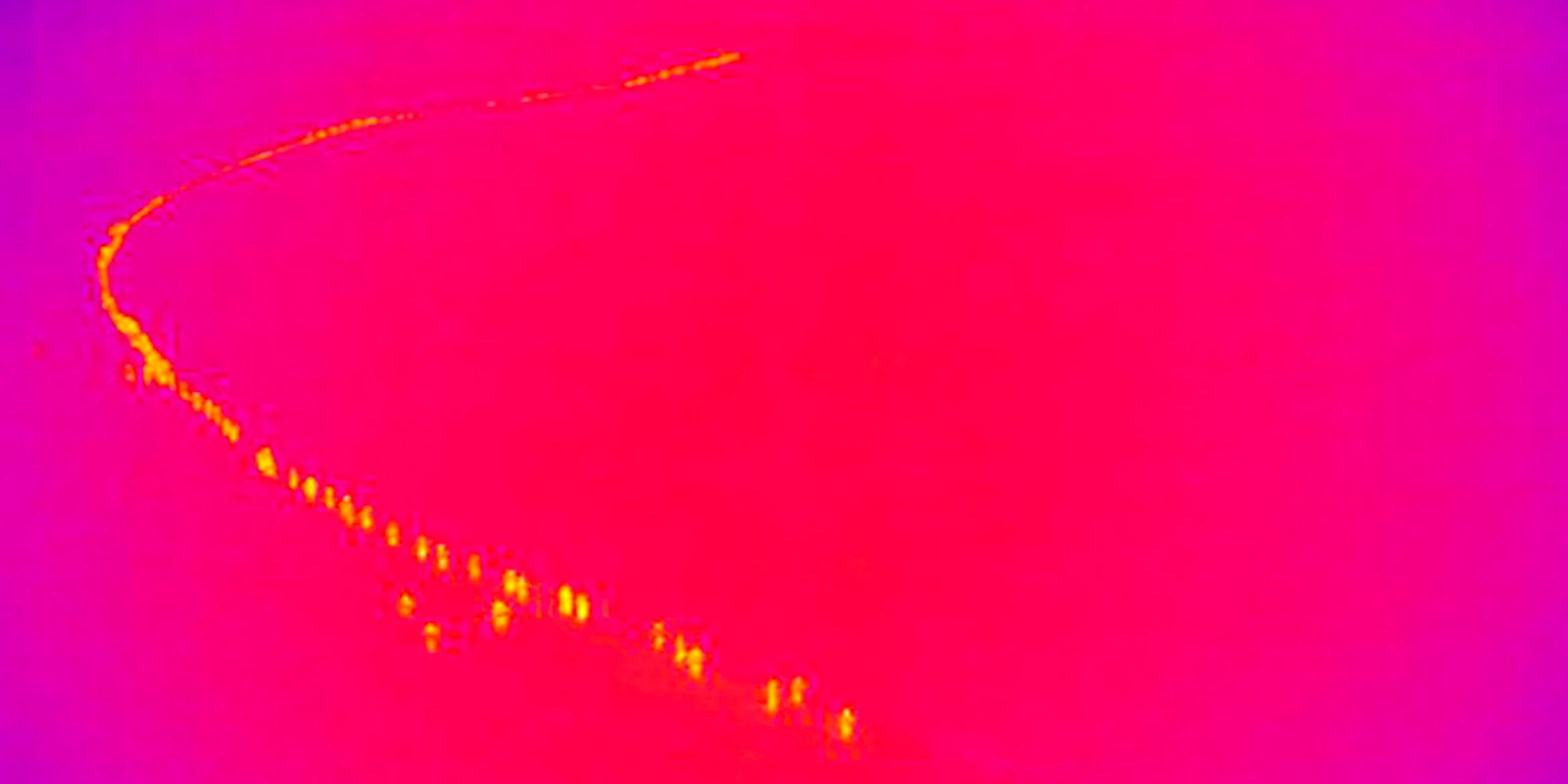 We’ve learned more about how missing six-year-old Ethan was found with help of more than 700 volunteers and a commercial drone pilot with a DJI Matrice 210 outfitted with a Zenmuse XT2 thermal camera. This morning the Washington Post has a detailed article about what it took and how a community came together to rescue the missing child, Ethan Haus. He would not have been found without the help of the hundreds of volunteers but the drone with the thermal camera played a crucial role in this successful search and rescue mission.

Commercial drone photographer, Steve Fines was going through Twitter last week when he noted that a six-year-old boy, Ethan Haus was reported missing. Apparently he had left his house and walked the dog into the woods behind it. By the time Fines read the tweet, the little boy had already been gone for four hours and it was getting cold and dark outside.

The Sherburne County Sheriff’s Office already asked volunteers to gather and start a search party. More than 700 volunteers participated in the search efforts.

Fines, a 52-year-old commercial drone photographer packed his drone and headed out the door at 8 pm on October 15th. He said: “I really had to tool that could help,” referring to his DJI Matrice 210 with the Zenmuse XT2 thermal camera, which he normally uses to help farmers locate missing livestock.

It was about 30 degrees outside when Fines arrived at the volunteer meeting spot. More than 700 people had gathered to start searching for missing Ethan and his dog Remington. Busses were taking volunteers to different areas to start the search and a rescue helicopter was flying overhead. Fines had to wait a few hours before he could launch his drone when the skies were clear. 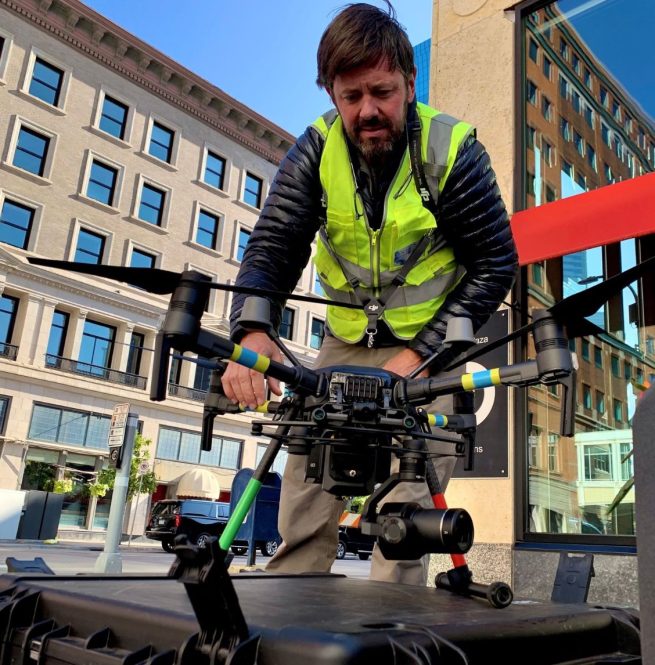 Around 10 pm that night Fines sent his drone up in the air and monitored the screen to see what the thermal camera was picking up. Over the course of a few hours, he spotted three others, a deer, a bear, raccoons, and other animals. But unfortunately still no Ethan. By that time it was already dark and it was impossible to see anything in plain sight.

Around 1 am the next morning, Fines took a thermal photo of the cornfields that showed an entire line of volunteers walking through the area looking for the missing Ethan. Fines said:

“That was 250 people out in the mud at one in the morning. Nobody was losing hope nobody was going home.” 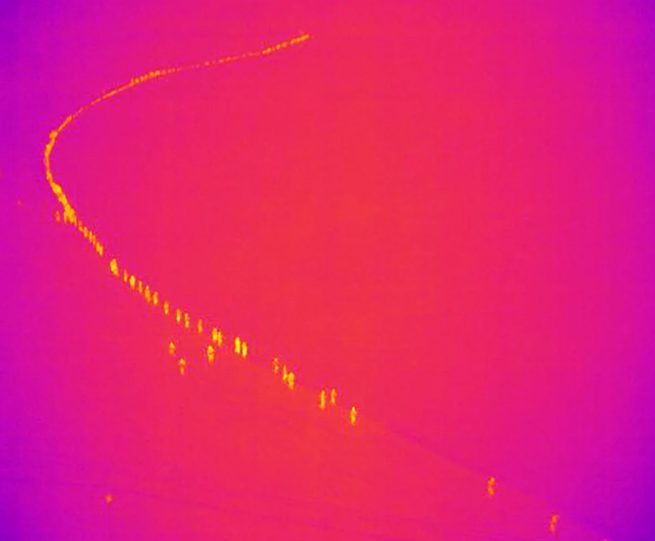 The moment that Ethan was found

Around 1:30 that morning a volunteer had found a footprint in the cornfields that looked like it might have been from a child. Fines was close to that position and he immediately flew his drone over.

Fines said: “I didn’t know what it was but I saw movements. I saw what I thought was the shape of a dog’s head and that was exciting the dog’s head looked different from a deer head, and I’ve seen a lot of deer heads. It looked really promising.”

As the drone pilot was watching his monitor, two volunteers, and their teenage sons sped over to the spot where Fines had seen the dog. He had positioned to drone directly over the location where he thought he might have seen the dog making it easier to find it for the volunteers.

Fines said: “I could see the four heat spots approaching when they got about 50 feet away, I saw the dog get up and start running around. Then you could see one of the rescuers run up to the boy and pick him up.”

They had found the six-year-old missing Ethan. Fines said:

“I just watched it quietly for a few seconds. I wanted to savor for that moment because there’s a lot of moments in life and that was a really good one.” 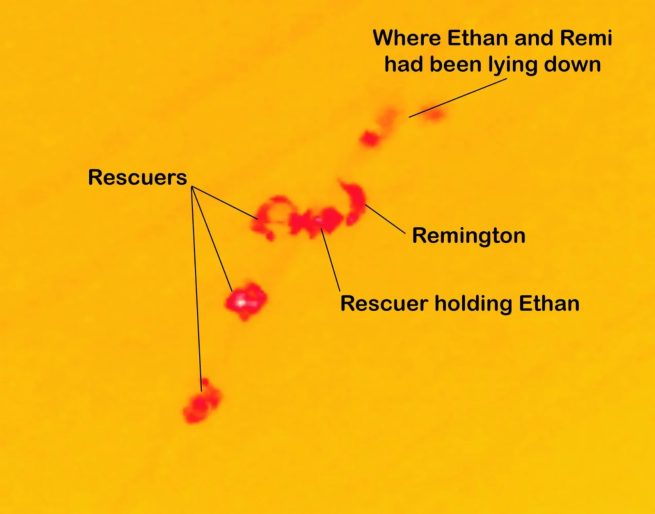 A little later it was confirmed over the radio that after 10 hours in the cold the missing six-year-old Ethan had indeed been found, lying down shivering in a cornfield with his dog at his side. As soon as the happy news broke a chorus of hooting and happy screaming erupted from the more than 700 volunteers.

“It was in the middle of the night and sounds carry,” Fines said. “You could hear people from a mile away. I’m not kidding.”

Ethan was found only about a mile and a half away from his home. He was hurried to an awaiting ambulance. And even though he was cold, he was doing fine the Sherrif said.

According to the article in the Washington Post, the Sheriff had said that the boy did not appear to be terrified or worse for wear after his hours-long adventure.

Sheri Haus, Ethan’s mother was grateful and overwhelmed by the enormous support from her community.

Haus had posted a thank you video on Facebook of a very happy and smiling Ethan. He said: “Thank you for finding me. You make my heart full!”

The successful search and rescue of the six-year-old Ethan that involved over 700 volunteers is a great story that shows that with the right tools in the right hands, drones can make a huge difference in locating a missing person. Steve Fines decision to bring out his DJI Matrice 210 with the Zenmuse XT2 thermal camera proved to be the right decision at the right time as the drone could see in the dark in a way that volunteers with flashlights couldn’t.

This is a great example of how drones can do good for society. and of course we are delighted that Ethan was found and brought back home safely.