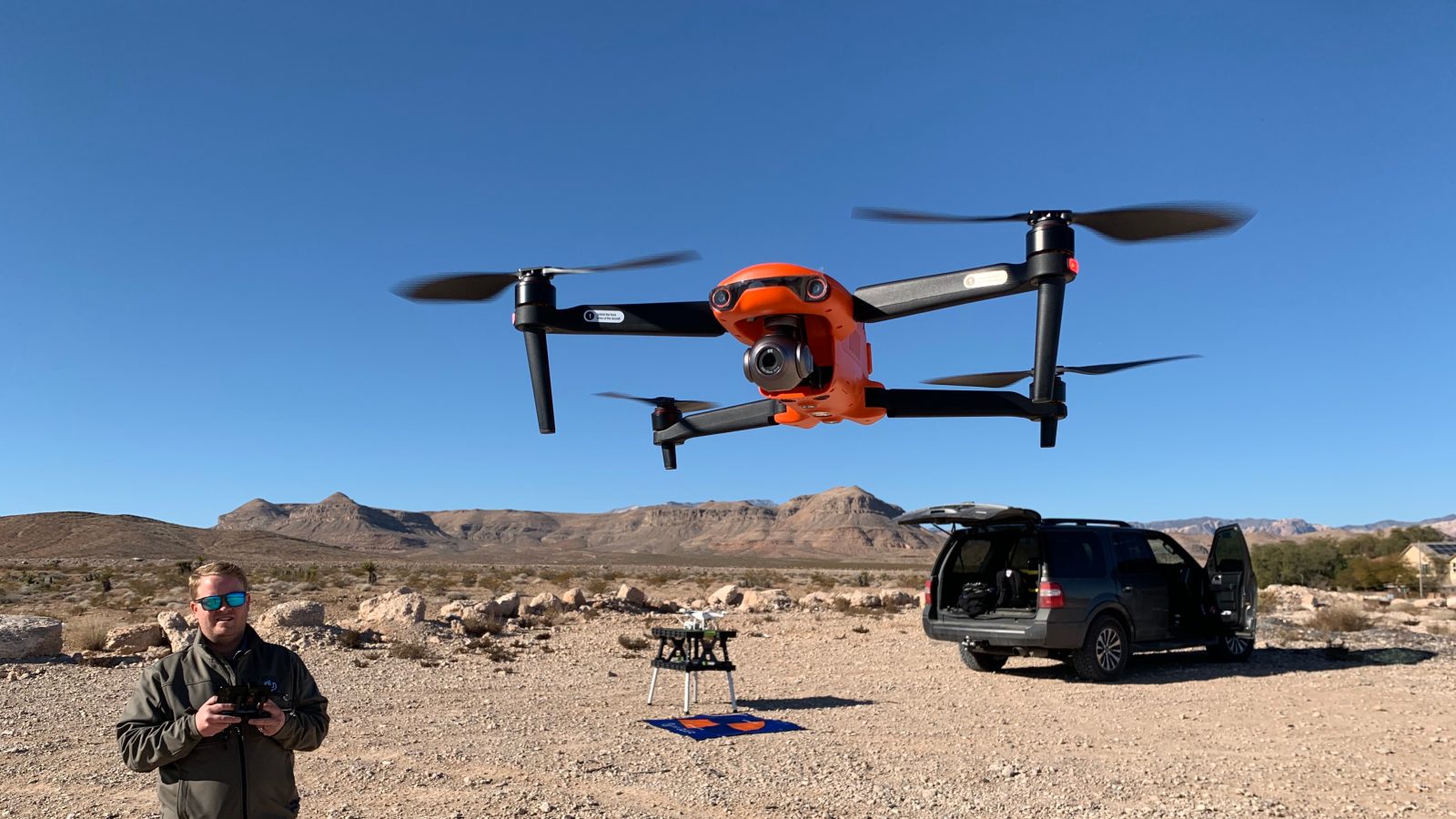 Yesterday morning we got up early and instead of going back to CES, Paul from Drone U and I went to an area right outside the controlled airspace of Las Vegas to fly the all-new Autel EVO 2 with the 8K camera. Here are our first impressions. Keep in mind that we were flying this foldable quadcopter with a beta version of the app. Autel Robotics told us that they will keep updating both the software and firmware before launching this drone by the end of January for $1,445.

The first thing you’ll notice when unpacking the Autel EVO 2 is that it feels solid and well-built. It carries a large battery to enable the drone to reach its 40 minute flight time and as a result, it is bigger than its predecessor as well.

Unfolding the drone is easy. The arms fold out in a logical way, unlike dare I say the DJI Mavic 2. Launching and flying the drone is straightforward and easy. If you have flown drones before you will be right at home. Before taking off we had to download the beta version of Autel Explorer on my Pixel 3 smartphone as the beta version of the app was further along for Android than iOS. No problem.

The remote controller for the Autel EVO 2 is the same controller we know from the original EVO. It is easy to use and the built-in display works really well. Battery levels are well indicated, although Paul pointed out that it would be nice to see voltage levels too. Maybe that is an option in the settings somewhere. We’ll have to find out. As a lot of the information is displayed on the controller, your smartphone screen is a lot less cluttered. I found this a nice experience as it made it easier to frame your photos and videos.

We only had one battery available to us so we could ‘only’ fly the Autel EVO 2 for 40 minutes but here are the things we liked:

What we’re missing (or haven’t found out how to do yet).

Verdict for now (based on only one flight)

Autel Robotics seems to have pulled it off. They have put together a very solid and well-built drone with specs that are out of this world, you might say. We have heard that the news of the specs of the Autel EVO 2 caused a bit of a shockwave at DJI’s head offices when they first found out about it, and rightfully so. DJI currently has no drone offering at this price point that can compete with the Autel EVO 2 specs. Autel’s new drone is truly impressive and we can’t wait to fly it more.

Autel Robotics told us that the Autel EVO 2 is already in production and will be shipping to the US soon. The drone is expected to be available toward the end of January for $1,445. The 6K version with a larger sensor and is more geared towards serious photographers and videographers should follow about six weeks later And will be $200-$300 more expensive.

The Autel EVO 2 version with choice of two different FLIR Boson thermal sensors will be significantly more expensive because of the high cost of the sensors.

The camera and gimbal combinations can easily be swapped out by undoing four screws and should take less than five minutes. You will be able to buy these separately as well, which is really nice.

We believe that Autel Robotics may have hit it out of the ballpark with the Autel EVO 2. I have the drone with me for about a week or so and will be flying it every day to see how it performs. Expect a more detailed review towards the end of next week.

Photo gallery of the Autel Evo 2