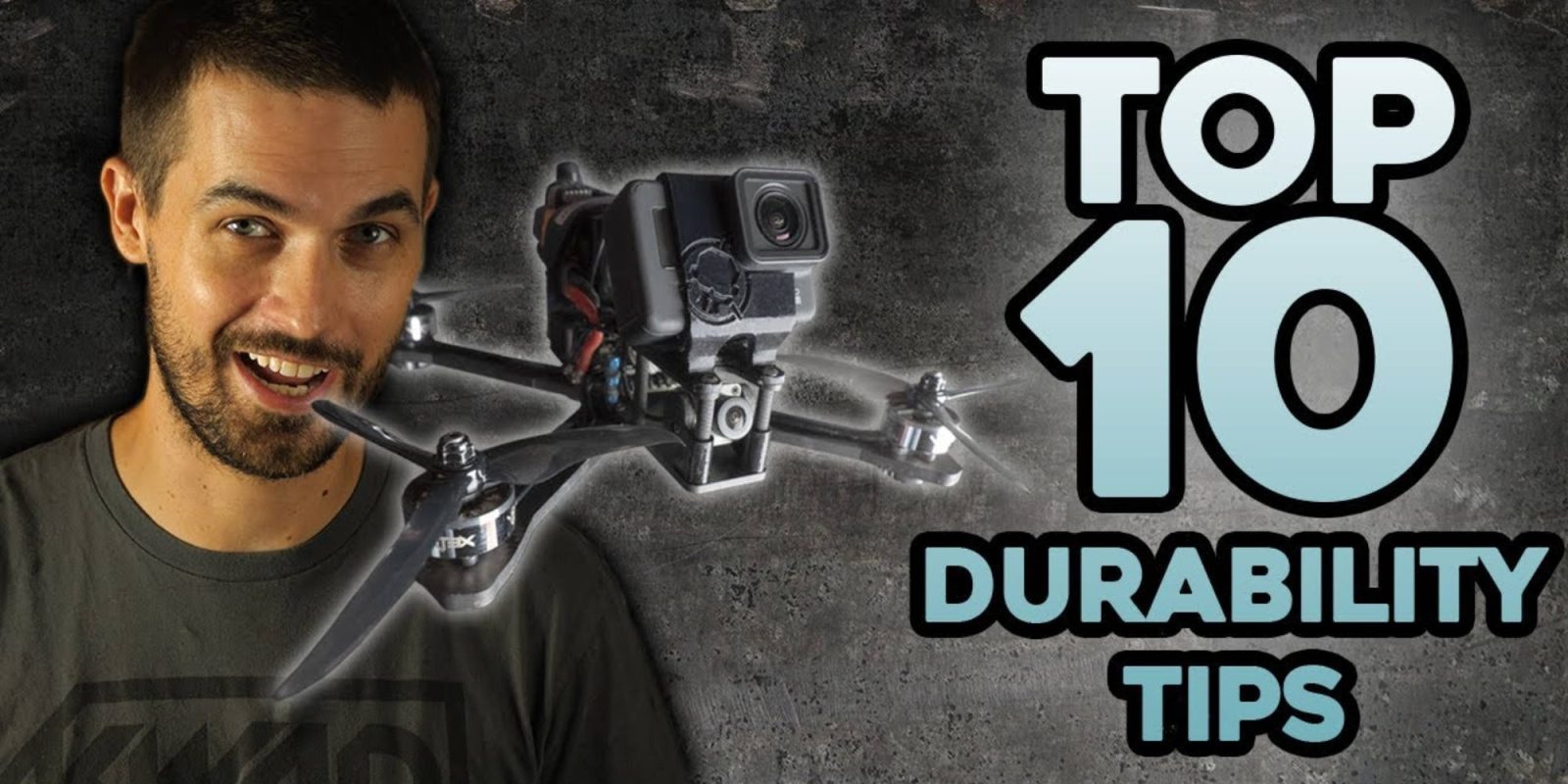 Drew from Rotor Riot has shared his top 10 tips to make your FPV drone more durable. He shows how to protect the important parts of the drone to prevent damage and the need for new parts after a crash. The video also touches on learning how to crash in a way that minimizes damage.

Choosing the correct frame is important when wanting to have a durable drone. Drew recommends getting a frame that is at least four millimeters thick with the mainframe plates not having a lot of the “science holes”—holes that are used to cut down on the weight but also impact the structural integrity.

Another big thing to look at when getting a frame is how well it protects the components. Drew mentions having a frame that allows the FPV camera to be set back in the drone far enough so the lens doesn’t protrude out of the front. This presents the camera from being shattered on impact. Along with this, look for frames with arms that protrude a little further from the motor to really protect the motors in a crash.

It’s important to protect your ESCs and wires as they are often out in the open and can be nicked by the spinning blades in the event of a crash. An easy way to fix this is to use a blade from one of the propellers and attach it directly on top of the ESC and wires. This means that the spinning blades will make contact with the plastic of the cut off blade instead of the delicate wires and circuitry. You can also use a 3D printer to create a guard to your liking.

A good way to prevent your antenna from snapping is to mount it with a flex point, meaning mount the antenna so only the flexible part is sticking out from the drone. That way if you were to have a crash the flexible part will take the brunt of the force much better than a rigid connector.

The antenna lobe is somewhat easy to break open during a crash, meaning the antenna itself will be exposed, bent, and eventually break off. An easy way to fix this is to wrap it with heat shrink with glue on the inside, this will keep the seams from splitting apart upon impact, and make the antenna lobe stronger overall by melting the heat shrink directly to the antenna lobe.

One of the worst things that can happen while flying is to have your battery eject, causing the drone to drop to the ground and making it hard to find. Drew has an easy tip to solve this, use two battery straps instead of one. This makes it much harder for the battery to wiggle its way loose during a flight.

Ensuring your electronic stack is mounted correctly is important as it will ensure they don’t come loose and potentially fall off mid-flight. Drew recommends not using the standard nylon standoffs, but to rather go for a metal standoff that goes through all the boards in the stack. This allows for all the boards to all be mounted to using four solid standoffs instead of one in between each board.

A great way to increase the durability of the electronics stack on any racing drone is to ensure the stack is mounted with rubber grommets or something similar that can absorb shock. Having these rubber grommets allows the grommets themself to take much of the shock instead of the rigid electronics taking the force, which could lead to damage and cracks.

The ends of the arms on racing drones are often the part that sees impact on the ground during a crash. Drew recommends using 3D printed bumpers on the ends of the arms which prevents the arms from splitting and means most of the damage is being taken by a fairly cheap and easy to replace part instead of having to replace the whole frame.

Using landing pads or skids means the bottom of your drone won’t get scratched or torn up by the ground when landing or doing a cool trick. These come in various types, with a foam style being popular as it absorbs the impact of a hard landing but can easily rip off due to the quality of the glue used. Drew recommends landing skids as they protect the drone but also allow you to slide your drone on surfaces as they are made with hard plastic.

One tip that is a little different from the above is to learn how to crash your FPV drone. After flying for a while, you begin to understand when you are losing control or are about to crash. Drew shares that when crashing, it’s better to pitch the drone up, making the bottom of the drone hit the ground first instead of the front of the drone. This will ensure that less damage is done and you won’t have to re-build your drone as often.

Be sure to watch the full video below to get the full insight from Drew and hopefully improve your FPV drone flying in the future.

What did you think about this video? Do you do any mods to your FPV drone to make it more durable? Let us know in the comments below.