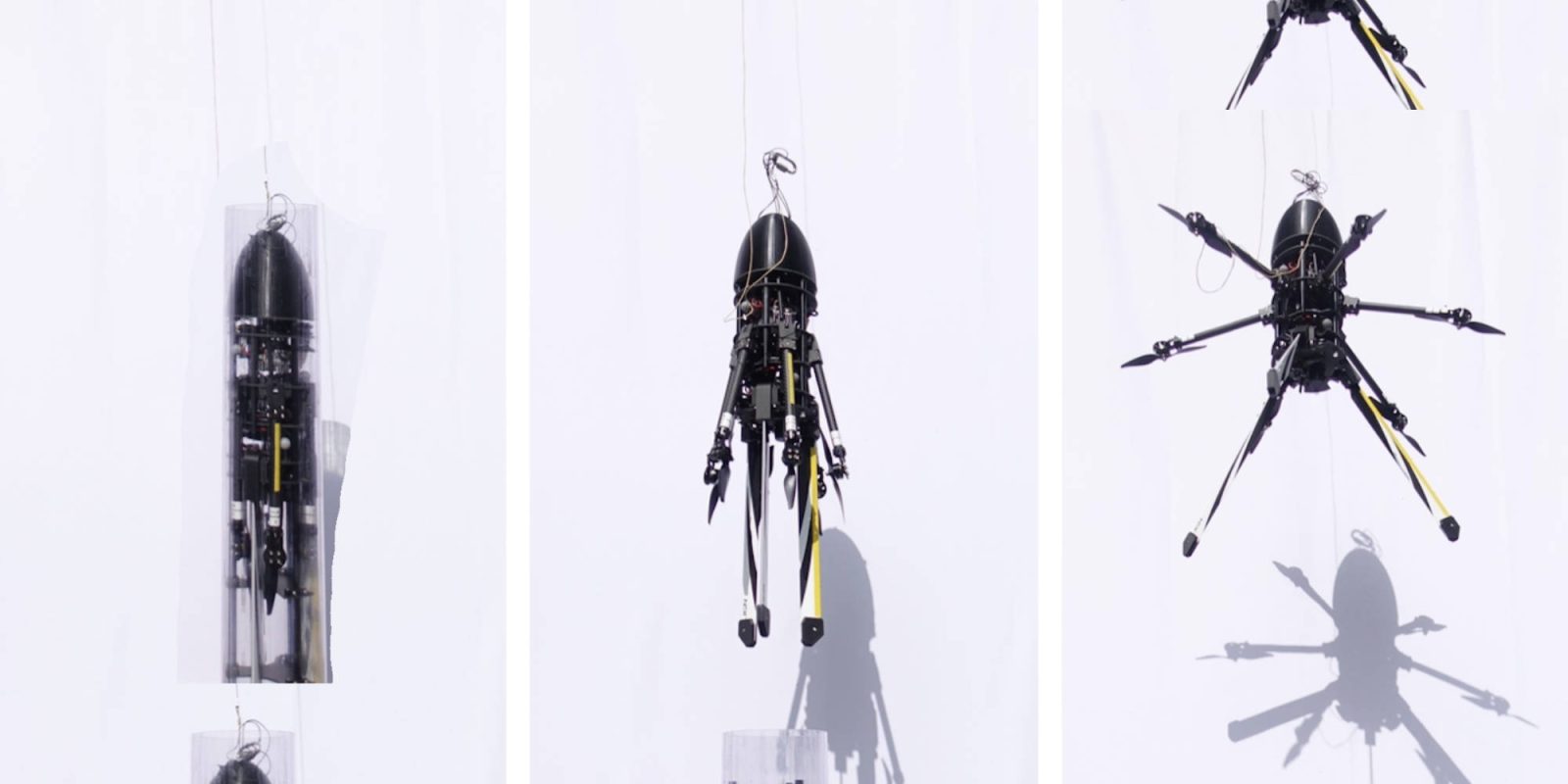 Engineers from Caltech and NASA’s Jet Propulsion Lab built a three-inch drone that could be launched from a barrel. It’s called SQUID, or the Streamlined Quick Unfolding Investigation Drone. And this year, the team has debuted a larger six-inch version of the drone.

The new six-inch SQUID drone comes with a few improvements over the previous smaller version. The drone has improved aerodynamics and batter stabilization while in flight. The deployable fins also improve the stability of the drone as it gets shot out of its launch tube.

In the first phase of the flight, the SQUID drone isn’t flying, it’s actually being shot out like a bullet and just following the trajectory, so that’s why changes were required.

As you can see from the image below, the drone has all of its heavier components toward the nose cone. This was done on purpose as it helps the drone to stay pointed into the airstream and allows the landing gear at the bottom of the drone to work much better.

Since the new version of the drone can autonomously stabilize and fly itself, it has to be equipped with extra hardware to do the job. The hardware chosen by the team is the FLIR Chameleon 3 camera, TeraRanger Evo rangefinder, VectorNav VN-100 barometer and IMU, and the NVIDIA Jetson TX2 as the brains of the system.

The new six-inch drone was much harder to build than first expected. The team was faced with the issue of having to cram all the components into the small space along with the sensors that makes the drone autonomous. They managed to get around this and got the drone to only weigh around 3.3 kilograms (7 pounds).

The team eventually wants to deploy the drones from larger aircraft creating an instant swarm that could be used to protect the larger aircraft or go out on smaller missions before returning to the “mothership.” The drones could also be used in a similar way but on Mars to survey the planet at a much faster rate and even remove the need for a large rover slowly making its way around the planet.

The team behind the SQUID drones spoke to IEEE Spectrum about the new six-inch drone and the process of creating it:

Moving to a larger SQUID was hard technically (as we had to design an entirely new vehicle), but the testing logistics was a huge jump in difficulty. For our smaller SQUID, simply a net and some spare parts would suffice to keep testing going for a day. But when we moved to the bigger SQUID, we’re throwing something a lot heavier, and packed with expensive electronics for autonomy, into the sky.

An indoor tether system was challenging to set up because the height of the CAST arena (42 foot-tall) meant the ideal locating point for the tether was completely inaccessible without a cherry-picker. The Caltech Drone Club stepped up and helped construct the tether system by weaving a tiny quadrotor towing fishing line around the ceiling beams. The fishing line was then used to pull larger ropes through.

One of the interesting things that we learnt with the tether system was the extreme acceleration of SQUID as it exited the launch tube meant the tether cable becomes very slack and actually risks getting tangled with or cut by the propellers. Luckily our incremental testing campaign caught this before we had any incidents. To deal with this slack tether situation, we constructed a nose cone with a 5-foot carbon fiber tube mounted at the apex, which we called SQUID’s swordfish nose (we had a bit of an aquatic theme going already). A tether attached to SQUID’s frame runs through the tube and connects to the larger CAST tether system. We confirmed that during launch (for our given launch parameters), the tether never droops lower than the tube, so we prevented all tether-propeller interactions.