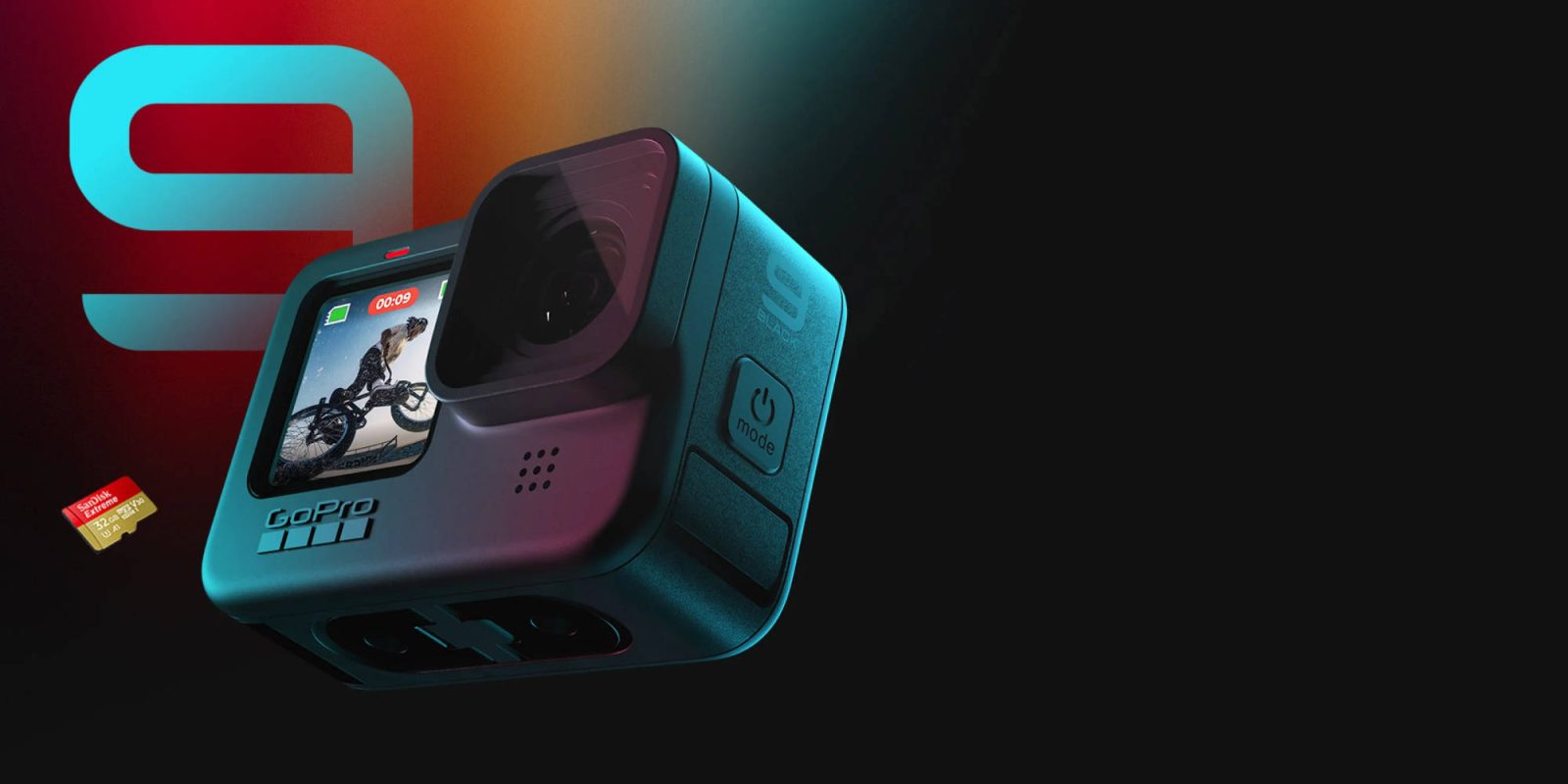 After what seemed to be months of leaks, GoPro has finally released the Hero 9 Black with a new front display, 5k 20 MP sensor, a bigger battery, and a removable lens. The GoPro Hero 9 Black is also the first GoPro action camera to come with a case that doubles as the packaging. $349.99 at GoPro.com or without the GoPro subscription at Amazon for $449.99.

Ever since the DJI Osmo Action came out with a front and rear display, everyone has wanted a GoPro with the same. The GoPro Hero 9 Black has given us what we wanted and now includes a front display that allows you to frame the shot while in front of the lens. This makes the Hero 9 perfect for vloggers or placing the camera up against something so you can’t see the rear display.

The GoPro Hero 9 has also upped the resolution with the ability to take 20 MP photos and 5k 30 fps video. The increased megapixels will be great to have, but we will have to see how it performs in testing. The higher resolution video will be great for zooming into footage later on or using GoPro’s built-in field of view options, but it would have been great to see 60 fps. While in the new 5k mode, you can also capture 14.7 MP frame stills.

The Max Lens Mod allows you to get an ultra-wide field of view (155 degrees) with “unbreakable video stabilization” at up to 2.7k 60 fps. The mod also automatically turns on horizon lock and increases the depth of field. The mod attaches to the front of the camera and looks to be GoPro’s replacement for a 360 camera.

The GoPro Hero 9 has gained a much larger battery at 1720 mAh, almost 41% larger than the battery in the Hero 8. This new battery should increase the recording time the Hero 9 is capable of resolutions of 4k and under but has likely been increased in size to power the new front display and the 5k 30 fps recording.

Not exactly a new feature but something that made its way back with the Hero 9 is the removable lens. The removable lens means you can change it out if you crack it or damage it in some way. This was removed with the Hero 8 for a better-looking exterior but made a lot of people mad. Great to see GoPro listening to what customers want.

A feature that was released in beta for the Hero 8, webcam mode is now an official built-in camera mode in the Hero 9. Simply click on the webcam toggle in the camera’s settings and plugin it into the computer. You will now have a high-quality USB webcam you can use to create videos or talk over Zoom.

The Hero 9 comes with the improved HyperSmooth 3.0 which builds on the previous two iterations of the stabilization technology and adds in-camera horizon leveling.

Along with HyperSmooth 3.0, the Hero 9 comes with TimeWarp 3.0 which adds more acceleration and control over your time-lapse videos.

The Hero 9 now lets you capture 30 seconds before you hit the record button to make sure you don’t miss out on capturing the moment.

The GoPro Hero 9 features new multi-purpose packing that reduces the amount of waste the company creates when selling each unit. The new packaging doubles as a hard shell carry case for the GoPro and its accessories. The case looks to be large enough for the camera itself, a few batteries, and a few smaller mounts. Nothing too big but great to have for traveling and protecting your camera.

You can pick up the new Hero 9 Black for $349.98, which includes a free one-year subscription to GoPro Plus, now re-branded to GoPro. If you aren’t a fan of the subscription you can pick the Hero 9 up for $449.99 on Amazon. You can also pick up a bundle that includes a handgrip, magnetic clip, and a spare battery for $399.98. Both options come with a 32GB microSD card.