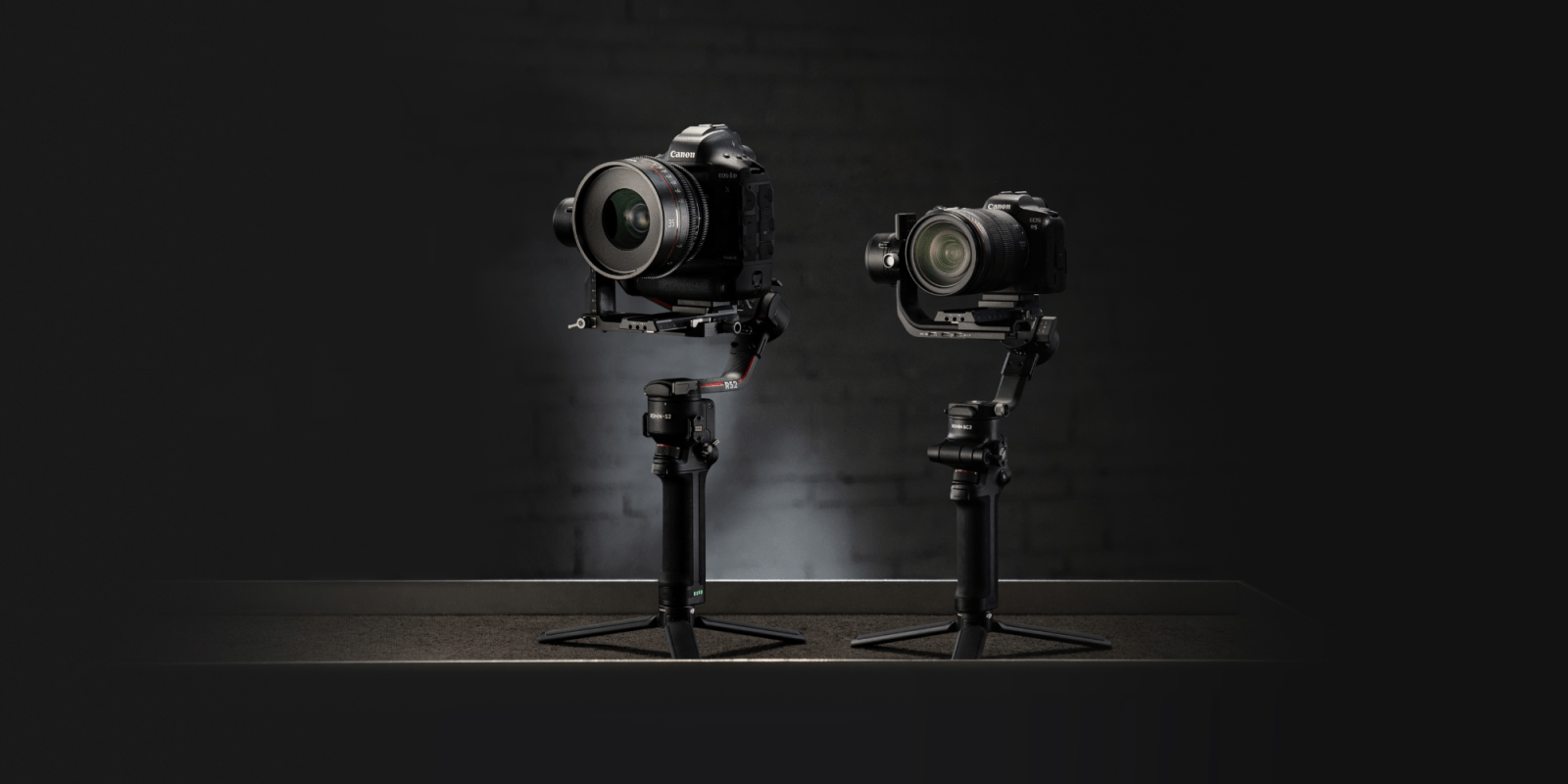 You’ve heard the rumors. You’ve seen the leaked images. And now? The wait is over. We’ve got everything you ever wanted to know about the new Ronins – right here, and right now.

There’s no denying DJI’s Ronin line has found a loyal following since its inception. In fact, the products caused quite a stir when they first came on the market. Professionals and prosumers became fast converts, praising Ronin products for their form, function, and strength. And the original? Well, that goes back to mid-2014. Announced in June of that year, the original Ronin shipped in July – and some people are still happily using this model. Ever since then, the line has progressed with new features and ergonomic improvements. In a nutshell, Ronin stabilizing systems have evolved to become stronger, lighter, and smarter. The two new Ronin models continue that trend.

As you may already be aware, DJI is releasing two new models this time around. They are officially the DJI RS 2 and the DJI RSC 2. The latter is slightly more compact and intended for mirrorless cameras and rigs weighing up to three kilograms (6.6 lbs), while the DJI RS 2 can handle 4.5 kilograms (10 pounds). Pricing is $499 for the base DJI RS C2 and $849 for the DJI RS 2. There are professional “combo” kits available, which we’ll detail later on.

For now, let’s break it down.

This model looks amazing. By utilizing carbon fiber on the RS 2, DJI has managed to get the weight down to a mere 1.3 kilograms, or 2.86 pounds. Yet it’s capable of carrying a fairly hefty camera and doing its thing for 14 hours on a single charge. That’s pretty amazing. Check out this video, released as the product became public at 11:00 pm EDT, October 14:

The RS 2 also has a quick-charge function, for when you really need to get back filming. A simple 15-minute charge will give you two hours of battery life. Very slick.

Here’s what DJI’s news release announcing the product has to say:

Simple to set up, easy to operate, and highly customizable, DJI RS 2 was created to allow filmmakers to adapt their system to their filming needs while feeling confident it will easily integrate into their workflow. Axis locks enable easier transportation and balancing, while a dual-layer camera mounting plate is compatible with both the Arca-Swiss and Manfrotto standard. A fine-tune balancing knob allows for even more precise balancing of the camera payload. The built-in 1.4” color touchscreen can display camera data, gimbal settings, or a live feed from the camera. Supporting 11 different languages, the ultra-bright screen can also initiate key functions such as ActiveTrack and intelligent shooting modes. The built-in front dial above the trigger allows for precise focus control and complements a DJI Focus Wheel mounted on the RSA port to create two-channel focus and zoom.[] DJI RS 2 also turns into a versatile tool that can be attached and used with other systems such as jibs, car attachments, and sliders. Two RSA ports double as NATO ports so that users can mount accessories and attachments such as grips and a remote controller.

I was lucky enough to be in Las Vegas back in 2017 for the NAB Show, where DJI released the Ronin 2. We managed to spend some time with DJI Senior Product Manager Paul Pan, who has probably forgotten more about camera technology than most of us will ever know. Paul took the time to discuss fabrication, and how DJI was always looking to find that perfect balance between strength and weight.

Just as interesting, however, was when he started talking about the algorithms used in the gimbal. It’s a predictive algorithm, meaning gimbal movements trigger it to calculate where the camera is likely to next move. It then directs more power to those particular motors that will be taxed, and less to those that won’t require it. That’s important because if you’re putting a lot of stress on the unit in one particular direction, the algorithm knows it must prepare the system for the predicted forces it’s about to incur. Think about a gimbal-mounted camera on a car taking a hard corner, or a jump, or braking. You get the picture. Makes a ton of sense…and a tip of the hat to the engineering brains that figured that one out.

The other thing to know is that Paul Pan is no stranger to professional movie sets. He’s been on several and enjoys hearing from directors and camera people about what they need in a gimbal system. Because DJI takes their feedback into account, you wind up with an even better consumer product.

There has been, as you know, a lot of anticipation around these products. That’s pretty common with DJI, but some products generate more buzz than others. Drones always have people waiting for deets, as do Ronin products. As a result, DJI has to try to play its cards close, while others were intent on leaking information if they could. And the leaks? They were coming as recently as this morning, with a leak from a retailer. It revealed the RSC 2 would have a 14-hour battery life and a three-kilogram payload capacity (both correct).

A couple of weeks back, word of the Raveneye system leaked. The wireless video transmitter can allow someone up to 200 meters away to monitor the camera output through a tablet or smartphone. Plus, of course, there were the usual photos of packaging. There was enough material floating around, in fact, that DroneDJ reporter Josh Spires was able to pull together an “Everything we know so far” wrap back in mid-September.

This is the RS 2’s little brother. But it has big capabilities, starting with a significant rethinking of its form factor. We will jump straight to the video:

Here’s the headline, from DJI’s news release on the product:

A completely new and portable folding design makes DJI RSC 2 easy for creators to carry everywhere without adding additional weight to the gear list. Additionally, the folding design provides creative ways to use the gimbal such as vertical filming without additional accessories, as well as a new Briefcase mode, where the main gimbal arm can be loosened and slung forward to provide unique shooting angles. Durable materials like steel are used on vital and frequently used components, while lightweight materials such as aluminum reduce overall weight. DJI RSC 2 weighs in at 1.2 kg (2.65 lbs), 35% less than the original Ronin-S, and has a folding footprint of 180×190 mm, the same size as a sheet of A5 paper. The built-in battery offers an impressive 12 hours of battery life and – like DJI RS 2 – the new quick-charge function directly to the battery handle has been added for urgent situations.

That’s a lot right off the bat. So it’s significantly lighter and has a killer battery life. No complaints here. The gimbal motors are stronger in this unit than its predecessor. The release says it can handle a camera like the Panasonic S1H with a 24-70mm lens. That’s going to be more than enough weight for many users. And the price point? Well, $499 for the base model is pretty appealing.

It’s the same weight as the previous version. What’s really really different is that it’s a foldable design and the battery does not detach. The folding design makes it easy to transport… It just gives you unique options and angles to shoot creative content.

Gotta love OLED screens – especially a little 1″ that displays key camera functions and allows you to make settings directly. Also welcome are the axis locks that will stop things from flopping around when you’re simply moving between locations or setting the rig down. The RSC 2 also features dual-layer mounting plates for the camera. This means it will accept both Manfrotto and Arca-Swiss plates.

You want add-ons? We got ’em. Rather, DJI has them. And there’s no shortage of ways to further expand the capabilities of both models. Here’s what DJI says about this area in its release:

DJI RS 2 and RSC 2 were designed to expand beyond single-handed stabilization into tools that can be customized with additional accessories to achieve the desired shot. These accessories include a cheese plate, Focus Wheel, 3D Focus System, Twist Grip Dual Handle, RavenEye Image Transmission System, Tethered Control Handle, counterweight systems, and more.[] For remote operation, both DJI RS 2 and DJI RSC 2 can use ActiveTrack 3.0 when the RavenEye Image Transmission System is connected, sending a 1080p/30fps low-latency feed to a mobile device using the Ronin app from up to 200 meters away. Vital features and functions can now be controlled and adjusted over long distances with the Ronin app such as gimbal movement using the virtual joystick and Force Mobile, where the gimbal mimics the mobile device’s movement. For solo operators using manual-focus lenses, the 3D Focus System uses state-of-the-art TOF sensors mounted above the camera to provide autofocus. This enables a single shooter to capture smooth and cinematic footage using a manual lens, without relying on a second camera operator or focus puller.

You know, we’re so used to drones that can take pre-programmed shots and execute predetermined moves. So why not expand the palette to pre-programmed movements built into these gimbals? Great idea, DJI. In fact, this is one of the features we already really appreciated about the Ronins. Face it: Would you be able (forget about willing) to manually reposition your camera ever-so-slightly while a time-lapse is taking place? Depending on the length of the time frame, some precision gimbal movements would be so small they’d be imperceptible. So yeah, thanks, I’d be happy to let a machine take care of this one for me.

Here are some of the pre-programmed movements baked into both models:

There are also panorama movements, Roll 360, and TimeLapse. Plus, both Ronins will be accessible through the Ronin phone/tablet app.

For those with more generous budgets, the Pro Combo option looks like the way to go. It includes additional accessories such as a phone holder, Focus Motor, RavenEye Image Transmitter, dedicated carrying case, and more. Trust me, you’ll use these things.

To recap, here are your options:

We have our hands up for an RSC 2. We’ll offer a first look once we get it, and then take our time for a longer and more thoughtful review. Given the Ronin heritage, we’re confident the product will live up to the hype.

Are you a Ronin fan? What do you like (or dislike) about these products? Are there any features you would have added to the new models that are not there? Let us know in the comments below!