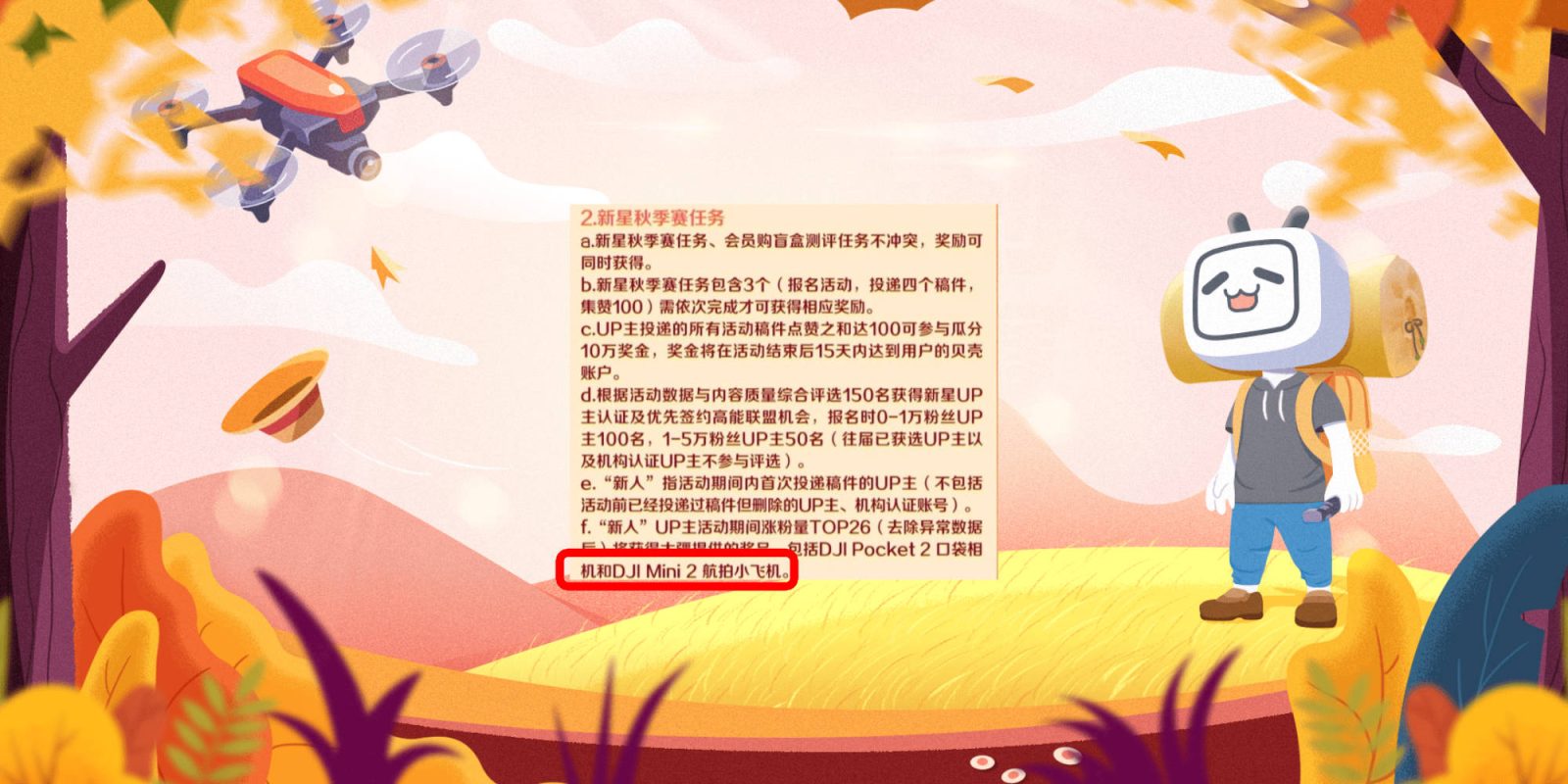 The DJI Mini 2 has leaked once again, this time on the Chinese website BiliBili in its latest fall promotion as one of the prizes. The DJI Mini 2, named the DJI Mini 2 in the promotion, was found on the terms and conditions page with the DJI Pocket 2.

In an image posted to Twitter by the Chinese website KANZHAJI, we can see DJI’s upcoming Mini 2 drone being mentioned as one of the prizes for the promotion.

Looking at the background image of the page, we can see a character on the right side holding what looks to be the DJI Pocket 2. On the left side, we can see a drone flying, but it looks to be a random design, which makes sense, as they can’t show it before it comes out.

It also looks similar to the Autel Evo, but there’s no mention of Evo or Autel Robotics on the website.

Translating the image allowed us to look at a few dates to do with the event. We know the registration opened on October 21 and will close on November 6. After this period, it looks like those that have registered will be able to publish their videos between October 26 and November 26.

Taking this into account, there are a few options we can look at. Since the terms and conditions already mentioned the DJI Mini 2, it could mean it will be released during the promotion, and BiliBili will update it. This means they accidentally put out the updated one first.

In the terms and conditions, the DJI Mini 2 is referenced as being the DJI Mini 2, which makes sense. DJI has been on a mission to shorten its product names over the last few months, and it looks like it will continue to do so. The DJI Pocket series, Mobile series, Ronin series have all already been shortened.

Yesterday we got a good look at the price of the upcoming DJI Mini 2, which appeared to leak on Adorama. The DJI Mini 2 was a suggested alternative when looking at the alpine white version of the original DJI Mavic Pro.

Earlier this month, a new drone hit the FCC database, with the model being MT2PD. From the image, we can see that the drone appears to look like the original Mavic Mini released last year. Looking at the image and the FCC label, we can see the position of it has changed along with the capacity of the battery. The Mavic Mini 2 looks to have a 2250mAh battery compared to the 2400mAh battery of the Mavic Mini. Let’s hope it doesn’t affect battery life.

As mentioned above, the drone that appeared on the FCC database goes by the model name MT2PD, the original Mavic Mini has the model name of MT1SS5. Looking at the first three digits of the model, we can see that they are the same except for the number, which goes up from one to two suggesting this is the successor to the Mavic Mini.

What we aren’t so sure of

The Mavic Mini 2 is rumored to improve the camera with a bump up to 4k from the Mavic Mini’s 2.7k. There was a rumor going around that the Mavic Mini 2 has come so quickly after DJI’s CEO said he wasn’t a fan of the picture quality of the original Mavic Mini. Instead of just upping the Mavic Mini to 4k, DJI might sneak in a larger sensor, which weighs a little more. This could be why the battery has a smaller capacity so it can make way for a larger sensor.

To differentiate the Mavic Mini 2, DJI will likely go along the same route it has with the DJI Pocket 2. DJI has added a red ring around the camera lens as a way to show it is an upgraded version of the original Osmo Pocket. So, expect to see a similar marking on the DJI Mavic Mini 2.

Since we saw the drone hit the FCC earlier this month and have now seen it on a seller’s website, it will likely be released in early to mid-November. The original Mavic Mini was released on October 30 last year, meaning DJI is preparing to get the Mavic Mini 2 ready for sale around the same time. I think DJI will release it sometime next month to help get more units produced in time for the launch. DJI probably doesn’t want to face the same stock issues it had with the recent Ronin launch.

DJI released a new controller with the Mavic Air 2, moving the phone mount to the top and giving your hands more plastic to grip onto. It would make sense for DJI to use the same controller for the Mavic Mini 2 but leave a few of the buttons off to differentiate it from the Mavic Air 2. Since the controller is also larger than the original Mavic controllers, this could result in the end price being higher.